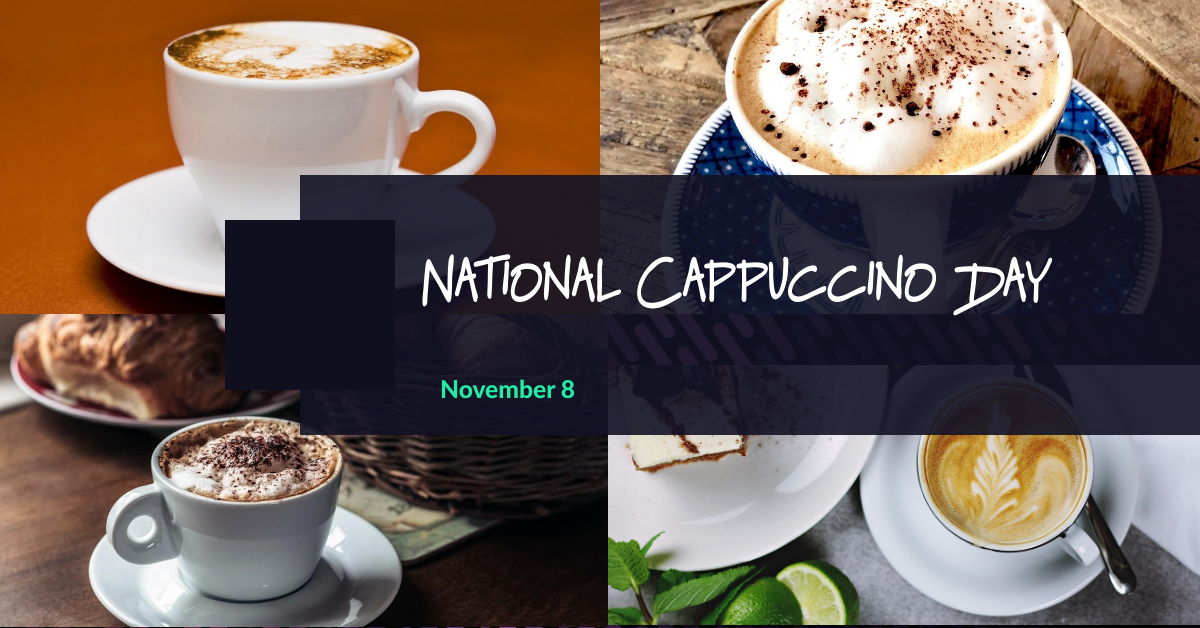 Are you a cappuccino lover? Then today is your day!

Have you ever wondered how cappuccino came to be? Typically regarded as myth, it's said that a 17th century Capuchin monk, Marco d'Aviano, invented cappuccino after the Battle of Vienna in 1683, and that it was named after the color of capuchin robes which are similar in color to an espresso mixed with milk. No one actually knows whether this is true. But did you know that it was actually in German that "Kapuziner" was first applied to coffee? Cappuccino was more widely introduced when the espresso coffee machine was invented in Italy, with the first patent being filed by Luigi Bezzera in 1901. After World War II espresso machines were simplified, making them more available for cafes and restaurants. It wasn’t until the late 1940s, actually, that the word “cappuccino” made its way into common usage.

Today, cappuccino is still the preferred breakfast beverage in Italy, where cappuccino is generally consumed early in the day as part of breakfast. Generally, Italians do not drink cappuccino with meals other than breakfast.

HOW TO MAKE A PERFECT CAPPPUCCINO (VIDEO)

HOW TO MAKE A PERFECT CAPPUCCINO AT HOME (VIDEO)

And if you love the taste of cappuccino as much as I do... here's a link to my favorite Cappuccino Brownie recipe.

WONDERING WHERE YOU CAN GET A GREAT CAPPUCCINO IN CHARLOTTE?

Click here for The 15 Best Places For Cappuccinos In Charlotte.

HAVE A BREW-TIFUL CAPPUCCINO DAY!

Ron and Alexandra Seigel hi Alexandra... my built-in Miele coffee maker also makes cappuccino, but I'm usually too lazy to do it. We have a couple of restaurants in Charlotte where the cappuccino is excellent.

Jeffrey DiMuria 321.223.6253 Waves Realty hi Jeff... that is certainly one way to put it! But you just may be right that a good cappucinno is a gift from God.

Kathy Streib hi Kathy.... by 6:30 am I'm on my third cup of coffee and there's always one more later in the afternoon. I have a built-in Miele coffee maker but have had my eye on a Jura for a long time.

Nina Hollander, Broker we've had our Jura since 2003 and love it. We have had to send it in over the years when it has issues but it is well worth it. We drink too much coffee to have the Keurig or the other single cup coffee makers. Call me if you have any questions.

Kathy Streib hi Kathy... same here with my built-in Miele. It needs some maintenance now and then, but it's been running strong for almost 16 years.

Roy Kelley hi Roy... thanks for popping by... wishing you a wonderful week ahead and trust it's gotten off to a great start.

Occasionally, I will have one as a sweet treat, a cafe latte with no flavors is more to my taste, Nina. I have t-shirt that says, Red, White and Brews! Have a fantastic day!

Wanda Kubat-Nerdin - Wanda Can! hi Wanda... I'd have a cappuccino every day if I could! Are you sure that t-shirt doesn't refer to beer? :)))

It could go either way, depending on the mood Nina Hollander, Broker. LOL!

Hi Nina Hollander, Broker - My husband is like you.  He has a cappuccino any chance he gets.  Happy Monday!

Nina even though I am not a big fan of cappuccino, I love the smell.

Nina ! Brew tiful Day !  I like it a lot.  And it gets even better with a brownie recipe.  Oh my I feel the pounds piling on.  lol  Make it a productive week.  Mark

This is making me wanna cappuccino now and it's not a bad thing in my estimation at all. :

George Souto good morning, George... I'll make you a deal... I'll order the cappuccino, you get to smell it and I get to drink it! :)

Mark Don McInnes, Sandpoint-Idaho good morning, Mark... since I was a kid I've loved everything about coffee (even though my Mother did not allow me to drink it). And I love coffee flavored desserts, coffee in just about any form, coffee ice cream, Kahlua, etc.

Laura Cerrano good morning, Laura... such a small treat a cappuccino... but it packs a ton of pleasure!

Hmm, I have never had a cappuccino myself but I must be missing out on something since it is loved by so many, haha.

Brian England good morning, Brian... you have no idea what you are missing out on... nectar of the gods! :)

Golly! I can't believe I missed this yesterday Nina Hollander, Broker . I guess I'll just have to go make up for it today with a double 😃.

Bob "RealMan" Timm hi Bob... two cappuccinos in one day would make a a red letter day for me!

There is a coffee holiday? Well, may have to celebrate after the fact.

Dorte Engel hi Dorte... indeed there is a coffee holiday. The main one is on September 29th.  Then there are days like National Cappuccino Day, National Ice Coffee Day, National Coffee Month each August... and the list goes on!

Wow! Did not know that. Gotta catch up then.