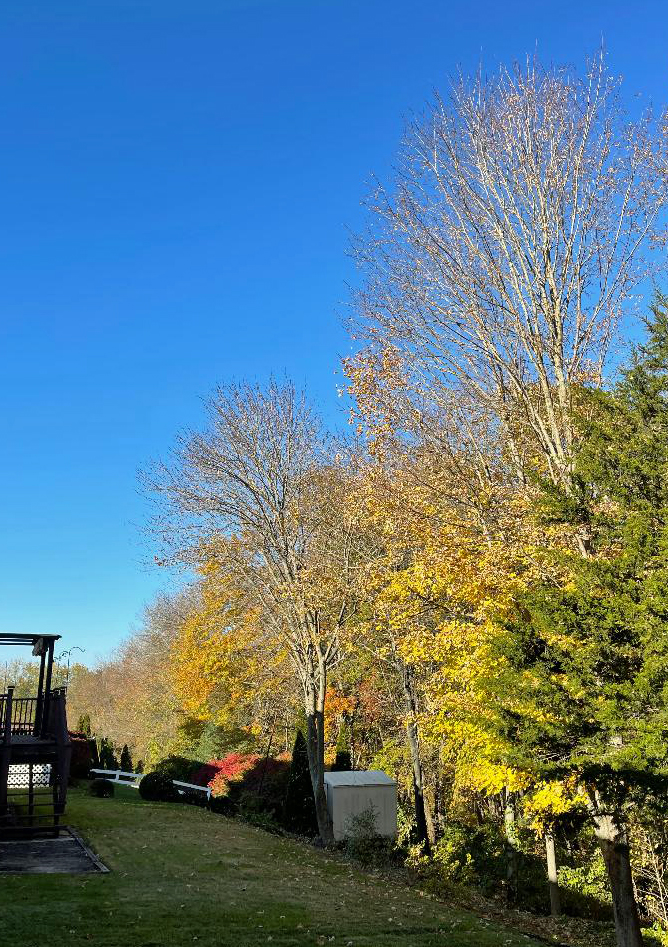 The first picture below for this year's Progression Of Fall Colors series was taken just as the colors were starting to change and there wasn't much color yet.  By the second picture a week later we can begin to see a more definitive change in the colors.  The third week the change in colors were more obvious as you can see in the  third picture.  Also in the third picture you can start to see some of the trees losing their leaves.  The fourth picture was taken only 5 days after the third one, however, the color change was more significant than the picture before in just a short period of time.  Last week we reached what I would consider the peak of out change in colors.  The fifth picture was taken only four days from the forth picture.  As you can see the colors changed very quickly.  This week you can see in the sixth picture, the trees have lost a significant amount of their leaves, and by next week they will have lost most of their leaves.

As I have done for the last eight years, I will continue to post pictures of this same spot at different points throughout the Fall to show the progression of the Fall colors.  Fall is a beautiful time of the year in New England, and even though the last couple of years have been better than the previous years, but they still had not been what I had hoped for.  However, this year the colors have returned to what I was hoping for.  I have become spoiled by the beautiful colors we normally see during the Fall, so I am happy with the colors this year.  My favorite colors are the trees with yellow, orange, and rust color leaves when they blend together, and I have gotten that this year.

Anyone planning to come to New England to enjoy our Fall colors at their peak, should plan on coming between the last two weeks in October to the beginning of November.  However, the trees turned color later than normal this year, I normally would have posted my first blog this year in this series at least a week earlier, but the change in color started later than normal. Wow George- when I saw your most recent picture the first thing that popped into my mind was "where're the leaves?"  I love your annual Progression of Fall Colors!!!!  Did you have to rake the leaves?

George, I am almost all on the ground and over the next few days will be raking and hauling to clear to the grass

Ed I only have this area to do, and as long as I keep up with it every week I can just bag it with the lawnmower.

We are enjoying your fall leaves series. Thank you for doing that and sharing these moments with us

George, great progression shots.  Yes the telltale signs of no leaves means someone is in the middle of a lot of work.  Mark

The colors on my trees and those in my community went from green to golden over night.  I was beginning to think they weren't going to turn.  All it took was a cold spell.

Hello George - it can happen "just like that".  Overnight? In an instant?  Without your documentation one might never really know about the speed of progression of the Fall color seasonal change in Middletown Connection.

So much vibrant color then the leaves fall off and it is all gone but the new growth will be beautiful.

Hi George - our Canadian Maple looks the same and is dropping leaves like crazy.

Good morning George. Nice of you to share the fall colors that I can view without having to rake leaves. Thanks! Enjoy your day.

Good morning, George... that sure is a lot of change in color and in the number of leaves left on the trees.

Thank you, George Souto! This was a wonderful treat! Your photographs are always special this time of the year.

George you are really milking the leaves:)) I do not remember you doing six posts or am I going senile?? Time to cut back on the grape juice?? Let me know... seriously love these posts, Endre

I did seven blogs last year, and I believe it was eight the year before that.  I all depends on how quickly the colors change, and the leaves stay on the trees.  This year I am actually going to do one additional blog on how this same area will look like when we get the first major snow fall.

Oh George, What a great idea. I enjoyed looking at all the changes in your backyard. Here too, the leaves started changing to their Fall colors later than usual.  Below is a photo I took yesterday... Haha MY Friend George Souto  yes you noticed my Hair has been goins south as my memory too:)) but don't tell anyone:)))))))))))Endre

I'm clearly behind in checking out your series...but I was on vacation last week so I have an excuse. Things are really changing now!