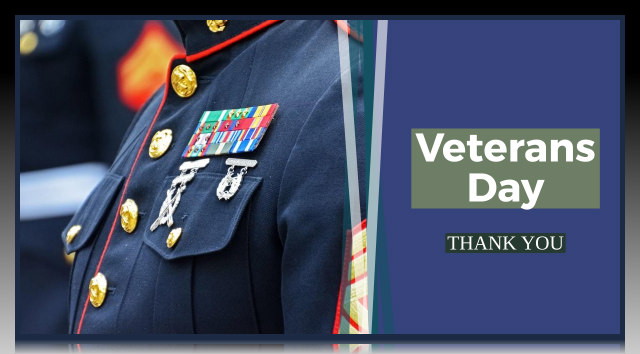 A Heartfelt Thanks to All Veterans

“ Veterans Day is the day set aside to thank and honor ALL those who served honorably in the military - in wartime or peacetime. In fact, Veterans Day is largely intended to thank LIVING veterans for their service, to acknowledge that their contributions to our national security are appreciated, and to underscore the fact that all those who served - not only those who died - have sacrificed and done their duty.”

We have learned to say “thank you” to those we meet who are serving or have served in the military but do we truly understand the sacrifices that they have made. Do we understand exactly why we are thanking them?

Those who serve can carry a weapon or fly a drone. They may be out to sea or in the skies. Or they may be with a medical unit or making sure that our troops are well fed.

All are trained and prepared to defend themselves and their units if the need arises. All make sacrifices that we have not been asked to make. If you know someone who has served, ask them, if they are willing, to talk about their service.

I’ve spoken about my friend, Vic, who served in Vietnam and was shot in the back and left for dead. He lay in the jungle until the next morning. I am forever grateful that I had the opportunity to hear his stories of what he and the others went through.

Larry served during that era as well but was not in Vietnam. And though I’ve known him for 44 years, I did not learn until a few years ago about his sitting nuclear alert. He said that he and his fellow pilots knew that if the day came when they actually had to fly carrying one of those bombs...they weren’t coming home.

These are stories that need to be told and shared.

I have shared this before but if you have a chance, it’s worth reading from Doc Bailey who was an Army medic and served for over 6 years.

Thank you to those who make so many sacrifices for us.

Thank you to the men and women in the military

who because of what you do, allow the rest of us to continue with our lives.

And to MY hero… He's the cutie at the top!

Hello Kathy - like so many parts of life, we often don't know the story behind a story.  So much can be gained by listening and learning.

Well done Kathy, WELL DONE.  Enjoy your Veterans Day, and make sure you thanks a VETERAN today.  thanks again for the post.  Bill US Army 1975

Hi Kathy... once we became a voluntary military the percentage of our nation who are/were in the military is barely 1%. Too many Americans don't often meet or know a veteran. And their stories must be told. Our veterans are the best of our nation. My thanks to Larry for his service.

It's important for us to be grateful for those who served so we may remain free.  I'm thinking of my son today, who served 20 years with the U.S. Navy.

Kathy, I have many current and past military clients, and need to get emails out this morning to thank them!

Definitely a cutie.  As you know we contribute time to the Seals, and we were in Northern Cal yesterday homoring them.  You do have a cutie!  A

I had three soldiers from our local Space Force Base in front of me at Starbucks today. I bought them coffee. The great news was that three other people fought over paying for their coffee...Americans are awesome.

Hi Kathy,
I always feel woefully inadequate when it comes to being able to express my gratitude to the military veterans who serve and have served to protect our freedoms. Your tribute is perfect. Thank you. And, thanks to Larry for his service!

We have ideal weather in Maryland for the Veterans Day activities.

Brian England I agree. It is unthinkable that some struggle just to have adequate housing and medical care.

Kat Palmiotti I agree. My cousin who was in the Marines in Vietnam does not speak about it. Larry and our friend Vic talk about it but don't often because there are other things they're interested in talking about.

Wayne Martin I agree. We are the beneficiaries of their sacrifices and we need to appreciate them.

Michael Jacobs My great nephew mentioned wanting to join the service (he's 14). I have no problem with that but I want him to understand what is involved.

Bill Salvatore - YVP Blog And I thank you for the service you gave for your country.

Nina Hollander, Broker you and I are on the same page!!!  So many young people know of the military through what they see on tv or the movies. I hope that the stories are saved...soon!!!

Myrl Jeffcoat And please thank your son for me. That is a wonderful commitment.

Joan Cox Hope you get them all out!!!

Ron and Alexandra Seigel I have such admiration for SEALS. I remember watching a documentary on the training they must go through. When we were in Delray, we had breakfast almost every morning with our friend Vic. It was so much fun hearing them tell stories!!!

Carol Williams I feel like I'm gushing sometimes because I truly am thankful to them. And it doesn't matter what they did in the service...they still make a sacrifice.

Roy Kelley so happy that you are having ideal weather. Our day began with storms and now  we have a gorgeous Fall day.

Kathy thank you to Larry and your friend Vic for their service.  Our Veterans deserve to be honored on this and everyday of the year.

Kathy loved your post and a salute goes out to Larry!! Thank you for your nice comment earlier today that is from the heart just another Airborne Ranger Infantry CPT who appreciates your thoughts, Endre

Hi Kathy - thanks for sharing the informtion about Larry.  We repect all of those who have served.

Hi Kathy Streib - I love the way you personalized this post and shared the stories of some of the veterans.  Your story about Larry and the nuclear watch was bone-chilling.  Too many do not realize what it takes to be a veteran.  As a mother of a marine, I did not fully understand until my son joined the Marines. Hopefully, your post gives others who are not as connected some perspective into the meaning of Veterans Day.