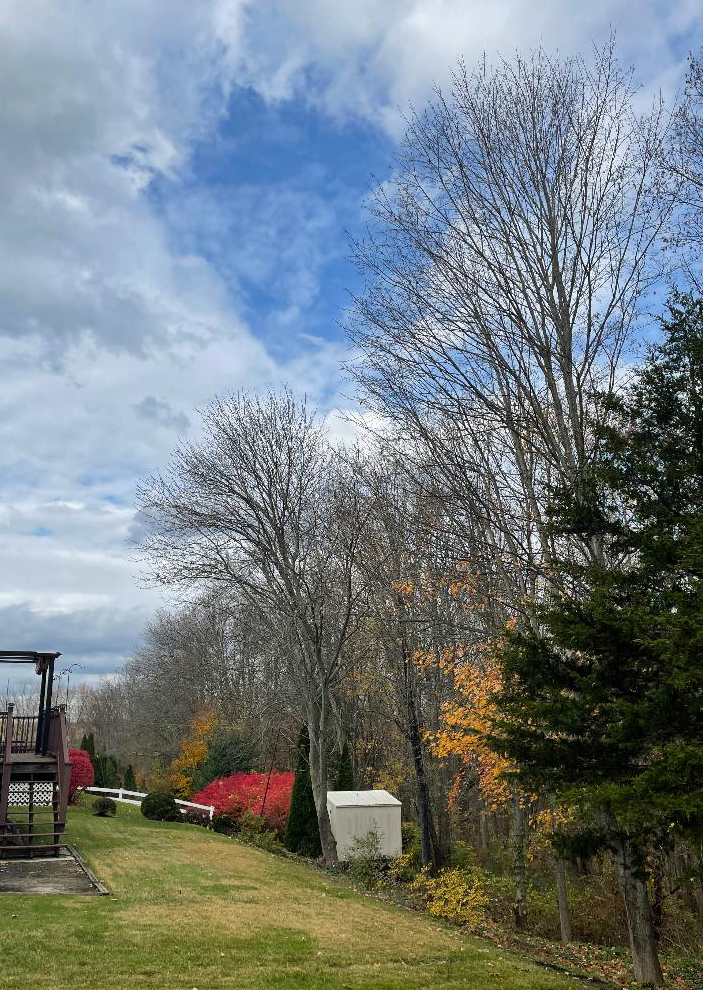 The first picture below for this year's Progression Of Fall Colors series was taken just as the colors were starting to change and there wasn't much color yet.  By the second picture a week later we can begin to see a more definitive change in the colors.  The third week the change in colors were more obvious as you can see in the  third picture.  Also in the third picture you can start to see some of the trees losing their leaves.  The fourth picture was taken only 5 days after the third one, however, the color change was more significant than the picture before in just a short period of time.  The fifth week we reached what I would consider the peak of our change in colors.  The fifth picture was taken only four days from the forth picture, and there was a significant change in colors very quickly.  Last week you could see in the sixth picture, the trees had lost a significant amount of their leaves, and showing signs of the Winter to come.  This week just about all of the leaves have fallen, only a couple of trees are hanging on to a small cluster of leaves.  The red you see in the sixth picture are bushes witch will hang on to their leaves a couple of weeks longer than the trees, and the green are evergreens, witch are green all year long.  The final picture below is what this sight will look like very soon once we have our first significant snow fall.

This now completes my 2021 Progression Of Fall Colors In Middletown, CT. which showed the progression of the Fall colors throughout this Fall.  Fall is a beautiful time of the year in New England, and even though the last couple of years had been better than the previous years, they were still not what I had hoped for.  However, this year the colors returned to what I was hoping for.  I have become spoiled by the beautiful colors we normally see during the Fall, so I am happy with the colors this year.  My favorite colors are the trees with yellow, orange, and rust color leaves when they blend together, and I have gotten that this year.

Anyone planning to come to New England to enjoy our Fall colors at their peak, should plan on coming between the last two weeks in October to the beginning of November.  However, the trees turned color later than normal this year, I normally would have posted my first blog this year in this series at least a week earlier, but the change in color started later than normal.

Fall is coming to an end In Middletown, Connecticut and soon the white fluffy stuff will be here.  I hope you enjoyed following my series of the change in Fall colors this year, and I hope to continue this series again next year with my 2022 Progression Of Fall Colors In Middletown, CT. George I always love your progression photos and had I not read your  post just looking at the last picture I would have said OH NO the White stuff has arrived?:) hopefully not before Thanksgiving:))Endre

Yes, George, for sure the next color in the yard will be that white stuff

Wow George- where did the leaves go?! I love your annual progression of the fall colors. Hope you'll share this year's snow photo

It is so nice to see the progression and a shiver went down my spine when I saw the last photo with all of the snow, haha.

Good morning George. You last two photos reminded me that I live in Chicago and winter is on the way. Enjoy you rday.

Hi George... lots of leaves gone already, but still some nice red peeking through. The tree in my front yard is just beginning to turn red but I'm afraid leaves might blow off before the tree is fully red.

Hi George - maybe in a couple more months that last picture will happen.  Hope we don't have an early snow.

Thank you so much for your progression photos. It's such fun seeing how things change over time. And I'm sure that last photo will come true soon!

Thank you for the progression of fall colors in Connecticut.  We recently were in Northern California where the progression is in full swing.  Wishing you a wonderful Tuesday.  A

I have enjoyed your series of posts regarding changing colors viewed in you back yard. I see some of the simiar changes at my house as my street-tree has gone from green to yellow to no leaves. Of course, there will be no snow covering my back yard.

This is such a fun series. While all the leaves can create a bit of work depending on where they area, it's fascinating to watch the changes and then finally see the bare trees that were so well hidden.

I always enjoy seeing your photos, George. I'll be driving down the road and see a beautiful tree and literally want to stop to take a picture.

George Souto I did not follow your progression of color posts as I had planned. Reading this post I got to see the photos.  No doubt the snowfall will arrive soon.  Wishing you a Happy Thanksgiving.

George Souto  I heard there maybe a possibility of snow for Thanksgiving . Did you will it with that picture???

George Souto - as the leaves scurry, snow falls and blankets the earth. There is nothing more refreshing to me than that first snowfall. Mother Nature always knows what's best. Thank you for your progression of leaves and that lovely last photograph solidifying that change is inevitable.

Good Saturday morning, George. I have some more leaves to rake in our yard.

Have a great day and a lovely weekend.