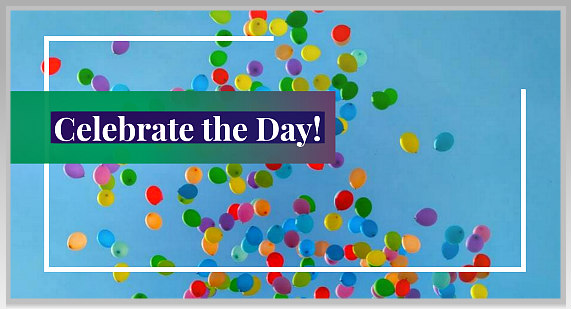 Celebrate the Day...The International Day for Tolerance is November 16

“Tolerance is respect, acceptance, and appreciation of the rich diversity of our world’s cultures, our forms of expression and ways of being human.” UNESCO’s 1995 Declaration of Principles on Tolerance

If ever there was a time to celebrate and acknowledge the International Day for Tolerance it is now. As I see it, being tolerant isn’t solely about race or ethnicity, whether from the north or south, which political party you belong to,  rock and roll or country, or whether you are vegan or eat meat.

Men build too many walls and not enough bridges. Joseph Fort Newton

It doesn’t matter. What matters is that we learn to accept each other as individuals. We don’t have to want to do what they do or share their beliefs. However, we must learn not to judge or try to force our ways and thoughts on others.

If I had to put money behind how we can encourage tolerance it would be through education. It’s not enough to pretend the differences aren’t there. We all ARE different. The highest result of education is tolerance. Helen Keller

Variety in thought, beliefs, and preferences makes this a richer world.

When we take the time to learn about, for example, someone else’s religion or culture, we may find that at the heart of their beliefs are ones similar to ours.

It’s also important to drop the name-calling. It is like placing “key tags” on people. Do it enough and what happens is that they, in our minds, become that tag we’ve bestowed upon them. Do not let your assumptions about a culture block your ability to perceive the individual, or you will fail.  Brandon Sanderson

As Wayne Martin mentioned, tolerance and patience are two skills that take a lot of practice to get right. As humans, we tend to judge others based on our own beliefs and experiences. Learning how to NOT do that is tricky, but important.

Having a strong tolerance is an acquired skill.  i do feel I have increased my tolerance with time. Thanks for the great post.  Make it the best Taco Tuesday you can.  Sell a house today.  bill

Ron and I have discussed the word tolerance at length.  We find (although I just re-read the definition) it does not realy convey the meaning of what people would like it to be.  Perhaps we are too nit picky, and I would rather see the concept of unconditional acceptance.  Tolerate has a negative connotation to me, it has the sense of forcing oneself to do something.. The intention is good, nevertheless.  Sorry for the long winded comment.

The capacity for or the practice of recognizing and respecting the beliefs or practices of others.

Kathy, definitely a day worth celebrating! I'm grateful this is a lesson my mother ingrained in us.

Kathy, had nothing to exhibit tolerance yesterday, had a great day, and hoping today is the same.

Tolerance, now there is something even much rarer than gold Kathy Streib .  Pick an issue... tolerance seems to be missing everywhere!

I wish all those who say they are tolerant, actually practiced that tolerance with those they do not agree with.

Hello Kathy, I tend to agree with Alexandra.  In this 'special day' one would hope we would be more appreciative to the many diversities around us, and not so much try to tolerate them as though our beliefs top of the ladder.  Mark

Kathy I don't know about the last couple of National Days.  First kindness, and now tolerance.  These are really challenging me.  ☺️

Hi Wayne Martin there's something to getting older...we learn to be more accepting.

Sham Reddy CRS I love that quote as well. It was so good seeing you at the Zoom meeting.

Michael Jacobs I always love Wayne Martin's comments. Most of us are a work in progress but that's ok. It leaves us something to strive for.

Nina Hollander, Broker this is why education is so important...for all of us.

Kat Palmiotti perfectly said. We come armed with our one view or perspective. That is why learning about others broadens that perspective.

Bill Salvatore - YVP Blog most of us have had to practice this!

Carla Freund you are very fortunate. It is something I am always working on.

HI Joan Cox included in my nightly prayers I ask to be less judgemental.

Roy Kelley I hope that you and Chef Dolores are doing well.

Bob "RealMan" Timm what I've seen more than ever in the last few years has been an unwillingness to accept anyone who has a different opinion.

Mark Don McInnes, Sandpoint-Idaho for me, I view it as acceptance. Semantics aside, it's something that is needed.

George Souto You are too much!!!!  You are both kind and very accepting.

For over 8 years I worked at an international software development company.  I wish everyone could have the same opportunity.  During my time there, I met and worked with folks from all over the globe.  I often found myself asking, "What do you believe, and what do you cook?"  The experience opened up the world to me, even though I hadn't left my cubicle.  Knowledge of one another, reduces fear, creates bonds and understanding!

My feeling is that if we have to learn to tolerate someone else then there is something wrong.  Perhaps we just don't understand that person which causes the problem and we should learn to understand them and perhaps we wouldn't have to tolerate them, haha.  I believe it is more about respect and we should respect one another regardless of whether or not they share the same ideals as us or not.  Now, if someone is just deliberately being evil, that is a whole other issue in my book and I will not tolerate that kind of behavior, haha.

Why can't some people let other people just be?

Be who they are.

Love who they love.

Be considered equal instead of inferior.