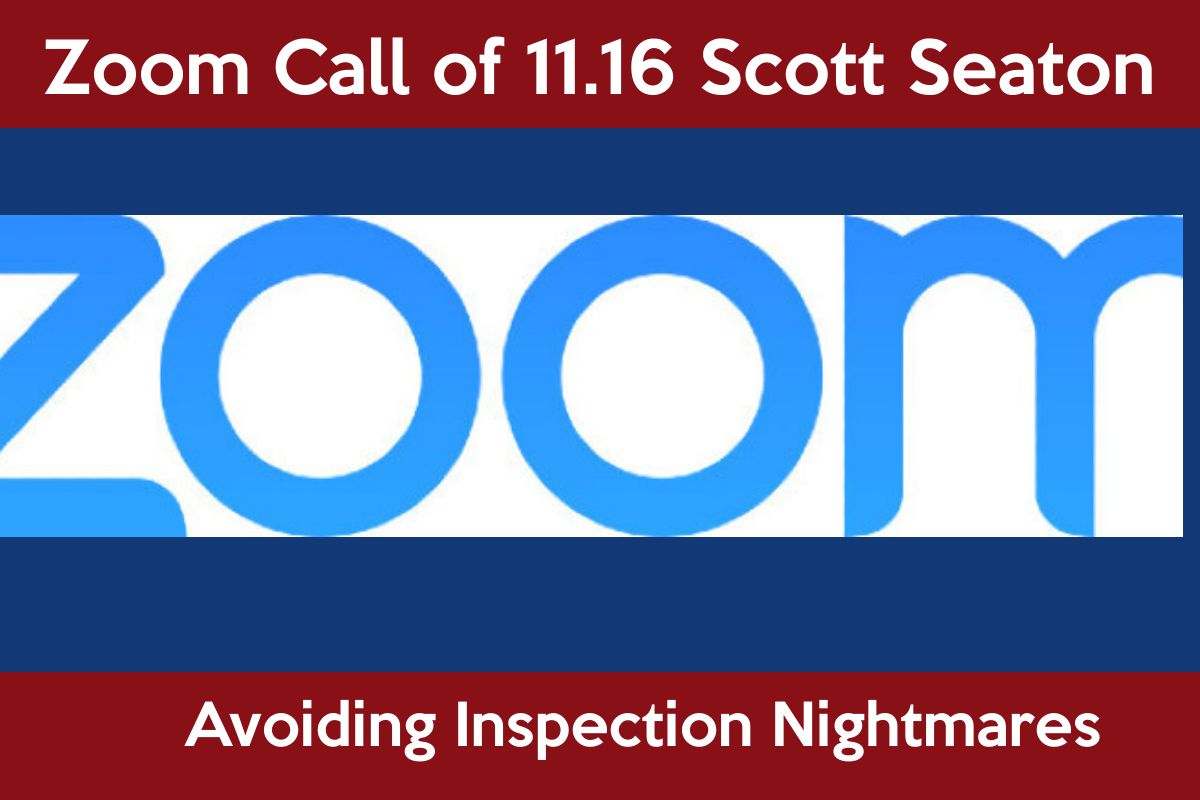 The title of the Zoom call was Inspection Nightmares, but to listen to Scott Seaton talk and his approach to his job, it was anything but nightmares. Like so many people, his involvement in his new career was as a result of frustration and too much exposure to a business that seemed to have gone off course.

His early career was as an employee of a large Multi-National wood company which like so many other companies saw its market share dwindling due to off shore competition.

Seeing the inevitable, he followed a suggestion from a friend and started to take courses to become an inspector. As his career change also occurred during the real estate crash of 2008, his first years were lean and offered more pro bono inspections than productive paying jobs. As though it were a flip of a switch, he started full time inspecting at the same time as he was released from his then full time job and to paraphrase: That's when I became a human being again. His approach to his inspections and his clients is not as an alarmist and uses Cookies and Crumbs as an analog to explaining his inspection results .

The crumbs of an inspection, the little things need some attention but are not the important  part of the job.  They can be dealt with along the way to being a home owner.

The important part of what is in the bag or box is the cookie and it's size is what needs to be addressed in requesting repairs after an inspection or even if the sale will go forward.

I would find this a very accurate way of handling inspections and not to have the buyers being scared by an alarmist of an inspector intent on offering his extensive knowledge and not focusing on the purpose of the job.

What this listener found to be the cherry on the top of the presentation was the inclusion, as part of his job, of a 90 day mechanical warranty on his inspection to the new homeowner. Scott subscribes to a company called Residential Warranty Services. At the conclusion of his inspection he lets the new owner now that they will be covered for 90 days after the inspection for such issues as Mold, Sewer issues, appliance recall issues and any other up to 75 warranties offered by this company.  He gave us the company phone number 800-544-8156 to allow us to find inspectors in our areas that might offer the same warranties.  The cost for the full inspection may run a bit higher but there is value in what is received and price will always have greater importance than cost.

It was clear to see that Scott is clearly the inspector with the Heart.

Ed, more Home Inspectors should take a page from how Scott's performs a home inspection, and deals with the client.

Thank you for such a great summary of the Zoom meeting! Your post is a wonderful overview of Scott Seaton Jr. Bourbonnais Kankakee IL Home Inspector presentation! My scheduled got reset at the last moment  and I'm sorry I couldn't be there.

Good morning Ed - The stories that Scott told of some of the strange inspections make me wonder what people are thinking.

Scott Seaton Jr. Bourbonnais Kankakee IL Home Inspector gave a very nice presentation and I really enjoyed it.  I also always enjoy your summaries, especially when I have to miss one of the meetings.  Thank you for always providing them!

Carol Williams   His presentation was both informative and low key.  If it is an indication of how he works there are very few alarms for his buyers.

Joan Cox   That was my impression as well.  I do have an inspector that works like that near me

Ron and Alexandra Seigel   My pleasure  I do it to try and entice others to join the calls.

Debe Maxwell, CRS   He did a wonderful job and it was my pleasure.

Anna Banana Kruchten CRS, CRB, Phoenix Broker   I did enjoy his call and found the insurance warranty he offered to be interesting.  I have an inspector like him near me and may discuss it with him.

And thank you for the recognition

Buzz Mackintosh   I was surprised to hear that as well.  In looking at the site it appears that it is something that New Builds offer a lot.

Wanda Kubat-Nerdin - Wanda Can!  He did a great job and being somewhat low key I'm sure he nails all his inspections

George Souto   His approach would be much appreciated by many.

Laura Cerrano   It is a very useful tool.  The beginning of the call is like watching Hollywood squares.

Grant Schneider   The Haunt Photos are not at all uncommon.  I recall going into a vacant foreclosure that looked like a haunted house for all the black/green on the walls.  It was mold

Brian England   I appreciate the thoughts.  I can only do them when I am able to make the call and I missed the round table last week.

I really enjoyed Scott's presentation, and this is a terrific recap for those who missed out. I really liked his style and no doubt buyer clients and agents (well, most) do as well.

Hi Ed Silva Thank you so much for your recap of   Scott Seaton Jr. Bourbonnais Kankakee IL Home Inspector presentation!!!  I loved his attitude and I could see that other agents were interested in the Residential Warranty Services.  If I were buying a home in his area, I'd want to use his services.

Ed Silva Good Morning and thank you for the summary.  I'm sorry to have missed this meeting.

Thanks for filling us in. Always appreciated Ed. Have a wonderful weekend. D

Scott’s presentation was entertaining and educational. It was worth the time that I spent by attending the Zoom meeting.