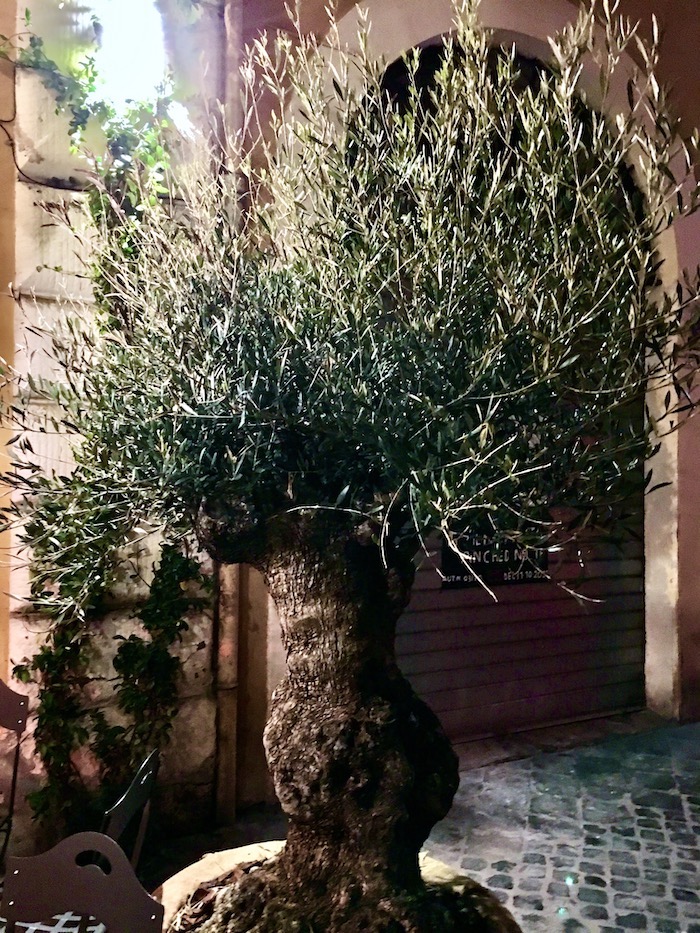 Pictured above is one of two gnarly olive trees that grew in a pot.  I saw them in Rome at an outdoor restaurant.  Some could mistake it as  a bonsai, but it is not a bonsai.

Some of our readers many know that Ron has studied bonsai with John Naka.  John Naka's bonsai "Goshin" now lives in the bonsai pavilion at the National Arboretum in Washington DC.

The link has a beautiful photo of Goshin. You can also see the progression that led to the final result.  Ron loved his experience, at one point built a display table for his trees. Now he has two that survived our moves.

Goshin is a bonsai created by John Y. Naka. It is a forest planting of eleven Foemina junipers, the earliest of which Naka began training into bonsai in 1948. Naka donated it to the National Bonsai Foundation in 1984, to be displayed at the United States National Arboretum; it has been there ever since. The individual trees represent Naka's grandchildren.

Hello A and Ron and always like to see your daily photos that you share with us here in the Rain.

Olive trees must be very hardy, and they can live a long time.  I wonder if it still produces olives?

Matthew O'Hare The Italians have a lot of plants around them,  Even in their apartment balconies something is blooming as well as window boxes.  Yes, it makes it really friendly.  A

Georgie Hunter R(S) 58089 I have no idea if this one produced olives, I should have asked.  And yes olive trees live long lives, and I need to research that.  A

Grant Schneider in Los Angeles, we were blessed with a large Japanese community both on the Westside where we lived and downtown.  There is so much to admire in their culture, and bonsai was actually borrowed from the Chinese and perfected by the Japanese.  A

Lawrence "Larry" & Sheila Agranoff. Cell: 631-805-4400 I told Ron about your comment, what an ignoramus this person is.  Bonsais do not cause harm, they are plants in small pots, that are living sculptures.

Michael Jacobs there is a definite Japanese landscape styles, and I think that the Huntington may have some.  There are many example in Los Angeles of this.  Bonsai are potted plants that are living sculptures and they are meant to live outdoors not inside.  They can be brought in inside to decorate, but no more than a day or two.

Goshin represents John Naka's 11 grandkids.  I visited his home and displays when Ron was in class with him.  Everything was breathtaking.  The Chinese were the first Bonsai artists, and the Japanese perfected it in my opinion.  A

Bill Salvatore - YVP Blog it always is fun to learn something new.  It is a joy and quest we both have.  A

Norma J. Elkins We had lots of Japanese people in Los Angeles.  Los Angeles is a big melting pot, and to be a success in any business one has to understand all the cultures. A

It is definitely an Italian style of Bonsai.  Nest time we are in Rome, I may stop by and ask. A

Kat Palmiotti Ron really enjoyed it, and I enjoyed going to nurseries with him to pick out specimens, and then reducing them to small pots.  I also enjoyed meetimg John Naka, he was definitely one those enlightened people.  A

Ed Silva That is the whole idea of bonsai.  A

Brian England come to think of it, the plants have no idea nor do they care what we name them.  Appreciating their beauty is plenty.  A

Jeffrey DiMuria 321.223.6253 Waves Realty Ron came to this conclusion about his bonsai collection after we moved. We only have one left which is surviving with beningn neglect.  A

Nina Hollander, Broker we both have green thumbs, but growing a bonsai takes a lot.  What Ron learned is the art of pruning as a result of this, and he does a great job.  A

Ron and Alexandra Seigel hi Alexandra... I knew someone who got into bonsai, so I have a real appreciation for what it takes. (More patience than I have).

Roy Kelley I will keep that in mind when we come back to the East Coast. A

Will Hamm Thank you for your kind words.  They are appreciated. A

That's a beautiful olive tree and rather unusual. Can't say I have seen one of these, or maybe I did in Italy and just didn't realize it.