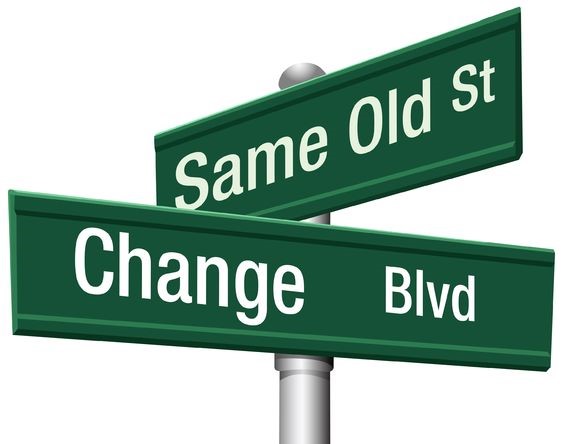 In his essay, "Self-Reliance," Emerson's famous quote provocatively stated which is best understood with more than one read and a single line.

When examined in context, this revered aphorism discloses a message about the value of character and open-mindedness. But, it is easy to miss the point.

Doing things "the way they are always done" may save time and mental energy, but, for many, savings come at a high cost.

Consistency is not a replacement for truth and character. Yet many of Emerson's time believed that consistency was of greater importance than truth. Character and integrity were not valued as much as consistency in thought and speech, and Emerson encouraged his readers to speak with certainty and precision. And to avoid conformity and false consistency.

Consistency and change are immutable factors of life. But they are not mutually exclusive.

Change of mind is not necessarily carelessness or whim. And change may be equally the result of new information or fresh thinking. The willingness to be misunderstood to embrace change is a prerequisite for greatness.

TRUE Stories of "A Foolish Consistency Or Change" -- My Experience

"Long before my real estate career and during my project management years working with key personnel, I worked with small and large corporations to promote innovation adoption, implement necessary changes, and achieve successful results. For many, the change helped the business prosper. But for a few, change was too complicated, threatening, and misunderstood. Those few I knew who were unwilling to travel onto "Change Blvd." no longer exist today.

One of my projects involved an electronic medical devices manufacturing company. As a project manager responsible for production output, I noticed that the incoming orders rose, but the production output stayed the same.

Despite extensive overtime for many workers, the demand continued to grow faster than the production output. Consequently, the company lost millions of dollars in missed shipments.

Based on the study results, management decided to implement the newer automated production system. This significant change called for different skills for production workers. The technical team implemented the training to teach workers to be more productive. As a result, the company survived the crisis and was able to get back on track.

Unfortunately, there were several key personnel who were resistant to the change. Many believed "we've always done things this way for 30 years." Some old-timers attempted to hang on to the "tried and true" ways. Sadly, they were faced with inevitable "layoff" and were no longer what most companies considered as "employable." A few lucky ones secured the lower-paying and outmoded jobs they were so familiar with."

What Have We Learned?

During the "precipitous decline in U.S. manufacturing" between 2000 and 2010, nearly six million jobs were lost. Many small and large manufacturing companies were forced to leave "Same Old St." and turn onto "Change Blvd." Those who could choose the new path went on to prosper, leaving their competitors, the hobgoblins, remaining on "Same Old St."

While change may bring innovation for the business, change is complex. The team must evaluate new ideas or methods objectively and see its team members not as they have been but as they might be. By studying their preconceived notions about how things should be done, the team members themselves must be receptive to change.

So, a Foolish Consistency or Change? What is your take on this?

Michael Jacobs, that's quite a compliment! Thank you so much. Writing this post brought back good memories for those I still remember and cherish the "good ole time." But sadness lingered for a while for those who had lost track of their directions!

What an interesting history lesson.  I had no idea of the 'culture' of the times back in those days.  I grew up with a Mom who constantly reminded us kids - when you're through learning (changing) you're through.  Personally I appreciate change as it always bring fresh new ideas and ways of doing thing etc etc.

The post was written based on my interpretation of Emerson's essay, Self-Reliance, tied with my previous work experience. We can interpret his quote in many different ways. The main message, I believe, is that Emerson wanted his readers to focus on individualism following our own voice rather than conforming to the path set by society.  Thank you, Anna Banana Kruchten CRS, Phoenix Broker for being here.

yes indeed, to be misunderstood could very well mean that you are the only one on the right track

Agreed! Rocky Dickerson. It takes courage and confidence to stand alone! Thank you for stopping by. It's good to see you here.

"A foolish consistency is the hobgoblin of little minds, adored by little statesmen and philosophers and divines."

I have always loved that Emerson quote.

CONGRATULATIONS Aura, on having this blog FEATURED in the Old Farts Club group!

Myrl Jeffcoat, I am glad you liked it. Thank you for the honor of the featured post.

Like
Erik Hiss
Keller Williams Capital Partners Realty - Worthington, OH
You can trust me for all your real estate needs!

I'm very consistent but small changes over 17 years have tweaked my business and made life much more enjoyable.

Hi, Erik Hiss; I believe consistency is a prerequisite for growth, but foolish consistency serves little purpose. I am glad that you're doing well. Thanks for sharing.

Awwww...hobgoblins. One of my favorite things to do with the grandbabies is go on a hike and hunt hobgoblins. They love it.

Sharon Tara, look behind you, be careful!!  🤡

When Ross Perot was running for office, he described the revocation of NAFTA as detrimental to our economy. He used the tern a great sucking sound that was jobs going overseas.

It was a reality as our government subsidized manufacturers setting up plants in this country and then sending them i their entirety to a country in the Pacific Rim with cheap labor.

That change is long gone

Hi Ed Silva. My experience primarily involved the "hi-tech" era when major manufacturing companies built semiconductor plants overseas (mainly in Asia) to address potential supply shortages. The investment fueled the growth of the hi-tech electronic industry during the early and mid-90s. Unfortunately, despite the heavy-duty investment in R&D and manufacturing operations, demand continued to outpace supply, creating "shortages" for critical electronic components. For many U.S. hi-tech giants, to stay competitive meant that they must find ways to reduce costs. Outsourcing was the name of the survival game! Your reference of NAFTA might have more to do with the auto industry that Mexico and Canada were two of the significant role players. Thank you for sharing your experience.

North Carolina also saw many of its manufacturing jobs go and have had to go back into those areas with new companies and re-train people to do new things. Unfortunately, those people had little choice but to embrace change.

Hello, Carla Freund; thank you for your comment. I echo your thought and am glad that you are doing well. During my earlier career in real estate, I knew of a few agents who were unwilling to embrace technological change. And, sadly, they had to leave the RE industry for less-paying and outmoded jobs. Thank you for your thoughtful comments. I appreciate that very much.

It is easy to become set in our ways when our habits bring us success. We may not even notice that success ebbs away due to our commitment to doing things the way we always have done them. Change can be scary and difficult. Not changing can be the beginning of the end.

Yes, indeed, John Juarez, when we feel we have "made it," the trick is to stay there. And why "fix it when it's not broken." I get it. I love your words, "we may not even notice that success ebbs away...."  Thank you so very much for sharing your thoughts. All the best to you!

Excellent post on a subject that affects us every day.

I believe there are some core concepts that stand the test of time, efficiency and effectiveness BUT there may be new and innovative ways to incorporate the core concepts.

Hello, faye schubert; thank you for sharing your thought. I agree with you wholeheartedly that some core concepts stand the test of time. The challenge for all of us is to recognize and embrace the "new and innovative" ways to incorporate those, we believe, are core concepts. Make sense?