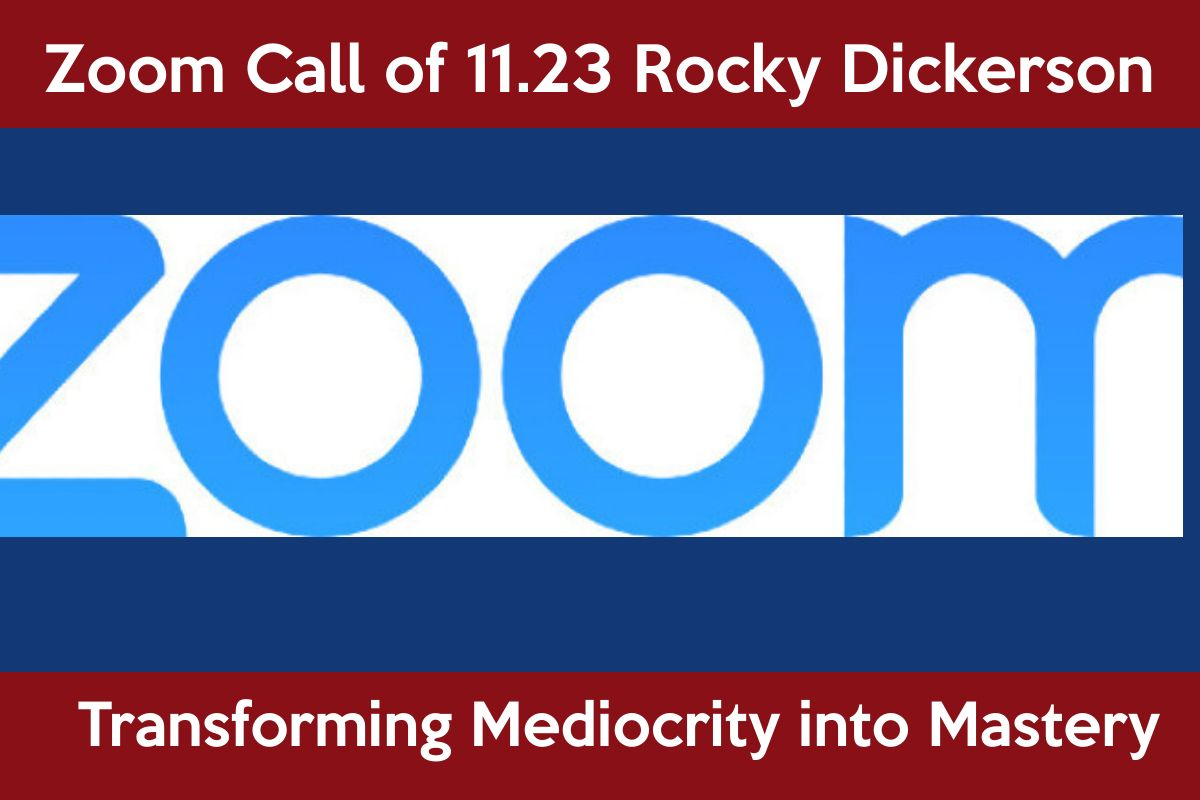 The title of the recent Zoom call with Rocky Dickerson was one of Turning Mediocrity into Mastery:  A guide for Achieving a New Personal Best.  The title offered little to the explosion of information that was presented in a dynamic and excited manner.

Rocky was fresh off of a seminar and for the manner and enthusiasm he made his presentation I would venture that all that did exit those doors looked like a thundering herd and woe to anyone that was in their way.

He defined Mediocrity as a term of recovery and Mastery as the pinnacle of success. I must admit that I was mesmerized with his presentation and my notes were greatly lacking. He offered several points of emphasis; all intended to excite and incite the desire to be just better and to not accept complacency.

One example he offered described a real estate professional that was so accomplished that in the late 1980's this individual was already surpassing 400 transactions a year and over $1,000,000 in commissions. For many that would be sufficient to want to maintain but that person focused on getting better. They analyzed their business model and tried to modify it to do just better

As an example of making a team stronger and also creating a business model that would serve the team leader well until the time to sell the business arose, he discussed a team that would look at a failed transaction as a fluke and just continue on to the next one.

Whereas a more sensible and practical pause would be made to analyze the cause of the failure and not only seek to not duplicate the error but write down the manner in which the correction was made and to also write it down in detail.  These points become the business model that gets placed into a binder and as the binder gets filled the business plan becomes a model and a valuable saleable asset.  He described this as learning from adversity.

Jerry Rice is the most prolific tight end in NFL history and his combined records may never be surpassed by one individual.

Jerry Rice practiced with the same intensity that he would display in a game. In running his practice patterns, he was never satisfied to just catch the pass and would finish the play in the same manner as if he were in a game situation by running as far as he could to reach the end zone. He practiced success and did it repeatedly.

Tiger Woods is known to be the best shot maker in the game and came about this skill at a young age.  This I can equate to very well.  He started golf at 3 years old and when he would go to a course to play his father would only allow him to use 1 club.  Depending on the day it could be anything from a 2 iron to a pitching.  Rocky didn't describe in this detail but I have read of this. The purpose was to try and compete the round with just the 1 club and thus learn to use each club for more than what it was originally designed to do. To be creative.

These lessons carried forward to allow him to be the second most prolific winner of Major tournaments, second only to Jack Nicklaus and the most successful winner of all time in tournaments.

As a way of visualizing success, he offered an analogy that works for me and many others. A person must visualize the direction they wish to go otherwise they would struggle to get there.  I understand this all too well as whenever I approach a tough shot I focus on hitting away or over the obstacle and make an effort to not see my shot fall into the hazard.  Seeing the success and keeping it in one's mind is a far more positive outcome.

Rocky believes in working to one's positives and when facing something that we are unsure of outsource that problem to someone that would do it more proficiently and better.  It was something he did with his latest website as technology has gotten more difficult for us to accept and achieve.

Rocky gave a strong 90-minute presentation but did it in 35 minutes. A very full Zoom meeting and ne that all just exhaled when it was over.

Good morning Ed.
I enjoyed Rocky's presentation very much and you did a great job of summarizing it. "Good enough" is never good enough unless it's the absolute best you can do.  The best you can do should always be improving.

Have a wonderful Thanksgiving, Ed!

Hi Ed - Rocky had a great motivational presentations.  One thing I always teach is leverage your strengths and get someone else to handle your weaknesses.

Hello Ed - there's no denying that notes can be important but there are times when connection with the topic and the speaker make the experience more memorable.

Thank you very much, Ed, for telling us about this successful presentation by Rocky.

HI Ed Silva - this was one that I really wanted to see.   I only wish these could be recorded so we can view them outside business hours.  Of course, we are so lucky to have you give us a synopsis of each call.  Thank you so much.  Happy Thanksgiving!

Ed excellent recap of Rocky's presentation.  Those who failed to attend really missed out.

Hello Ed, this is one I wanted to see but was driving up the mountain cabin at that time.  Thanks for sharing.

Such a great summary!  Rocky Dickerson is an outstanding speaker and has so much knowledge to share with us!  I hope that you have a wonderful Thanksgiving!

Thanks for pinch hitting at the last minute Rocky! Nice recap of the Zoom Ed !

Thank you for another terrific recap of the presentation by Rocky Dickerson. He is a master of his craft and has a special delivery. On his blog, he put the entire outline of notes. Thankful today for both of you and how much you continue to share with the members.