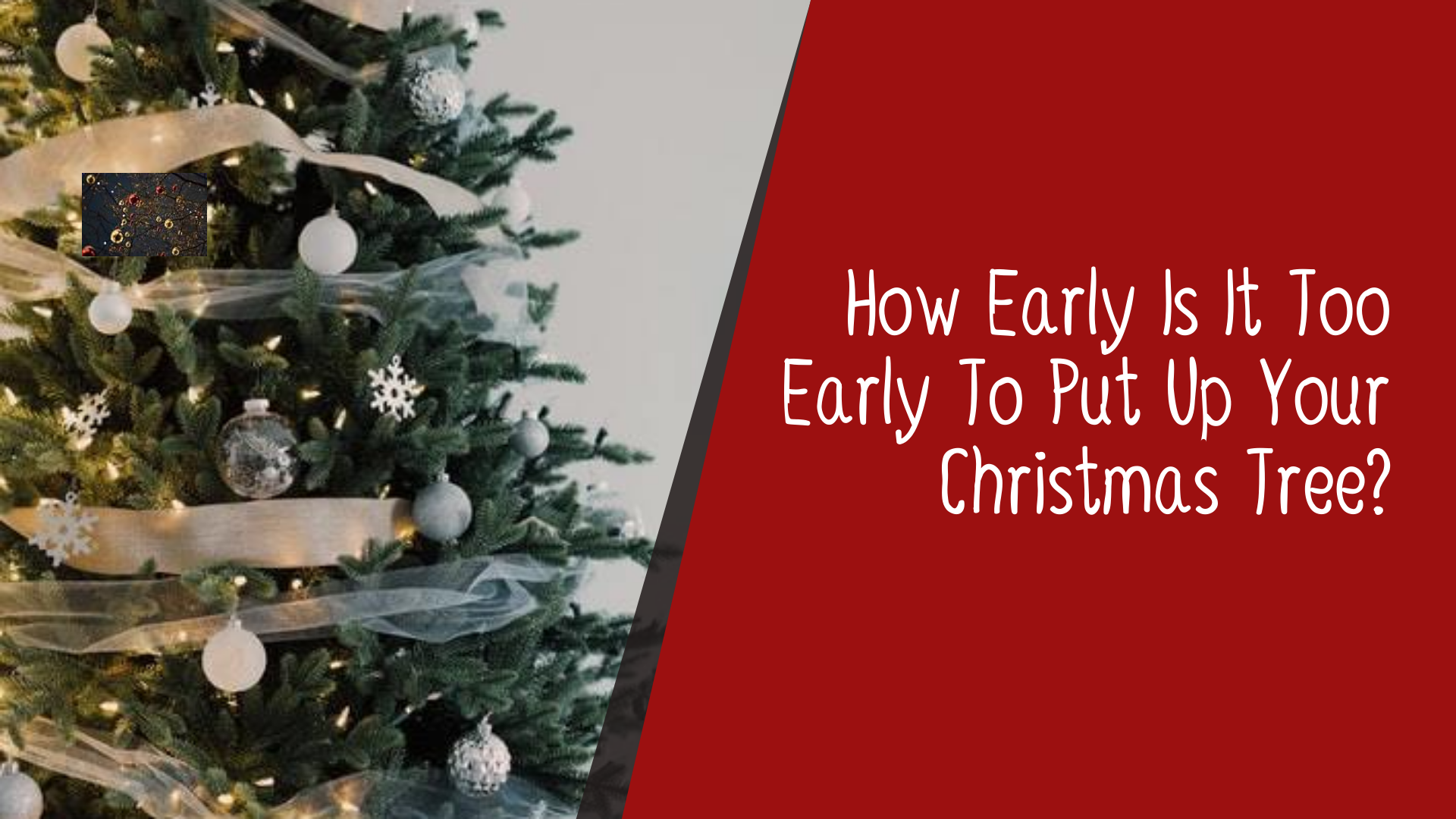 IS IT EVER TOO EARLY TO PUT UP YOUR CHRISTMAS TREE?

As I've been driving through my own neighborhood the last two weeks, I've noticed that a large number of homes have had all their Christmas decorations up and decorated trees twinkling in their windows since at least one week before Thanksgiving. And it seemed that this year more homes were decorated well ahead of Thanksgiving than in past years.

Obviously, I'm not the only person asking how early is it too early to put a Christmas Tree. Axios Charlotte recently polled Charlotteans, asking when it was acceptable to put up one's Christmas tree. According to the Axios survey of the 455 Charlotteans who responded to the survey: Per the Axios Christmas Tree surveys, Charlotte wins the award for putting up its trees earlier than just about any other city with the highest percentage of Axios reader who put up their trees before Thanksgiving.

So I guess it wasn't my imagination that I was seeing so many homes decorated and trees up before Thanksgiving this year.

Of course, Thanksgiving has come and gone now. If you're in the market to buy a fresh tree and wondering where to go to do so, click here for list from WBTV.com.

So what do you think?

How early is it too early to put up your Christmas tree?

Once you're done shopping for and decorating your Christmas tree, if you've been thinking about buying or selling a Greater Charlotte home during the holiday season, it's not toO late to do either. And I can help. Just call or text Nina Hollander with Coldwell Banker at 704-779-0813 or email at nina@ninahollander.com. There's absolutely NO OBLIGATION. A consultation with Nina Hollander is FREE. I'd love an opportunity to earn your business, to exceed your expectations, and to show you why experience matters and how:

Joan Cox hi Joan... we have radio stations here that started playing Christmas music last week already. And they quit on Christmas Day... never understood why they didn't keep playing until New Year. This is my weekend to get my trees up... lots of work ahead of me.

Nina the earlies we have ever put up a Christmas tree has been the weekend following Thanksgiving, but most of the time it is a couple of weeks after Thanksgiving.

I am not a fan of Christmas trees or decorations on or before Thanksgiving.

George Souto hi George... I agree with you about no Christmas decorations on or before Thanksgiving. This is my weekend to get my trees up so I can spend December doing what I need to do with clients, Christmas cards, etc.

We get our decorations up shortly after Thanksgiving and take them down after little Christmas, Jan 7.  People may be anxious to get away from the past year quicker and bring on the cheer quicker

Nina, My goal is always to set up for Christmas the weekend after Thanksgiving however my clients often come first and I bow to the first week in December 🎅

Nina, as far as I am concerned anyone who decorates for Christmas before Thanksgiving is not aware of the American Traditions..... as to what I find ironic is eight or ten years ago it was so Politically Incorrect to say " Merry Christmas" find it funny I see people who are proud Atheist saying how much they love Christmas:)) and not going around "Happy Holidays" comments... but that is just me laughing at the hypocrites, Endre

Hello Nina - time on this planet has shown me that "timing" is rather subjective and I have heard examples of people who have Christmas trees decorated  in their homes year-round.

I did not ever see that in the house of my childhood.  And there have been many years where there was no tree at all.

When I was a young kid, we would put the tree up on Christmas Eve. On purpose. I'm not sure what the reasoning was, but that was the way it was. I think I put mine up a few weeks before Christmas last year. This year might be a week or so before. One of my sons is coming in January and I'd love for it to still be alive... We'll see.

I am in line with when you would put the Christmas tree up and having an Advent calendar was always something we hung up.

Ed Silva good morning, Ed... we normally keep our Christmas decorations up until Russian Christmas which is after the new year.

Paul S. Henderson, REALTOR®, CRS good morning, Paul... I always try to get it all done during Thanksgiving weekend. That way I can focus on clients and Christmas activities the rest of the season. It's rare that I have clients out looking at homes on Thanksgiving weekend.

Endre Barath, Jr. good morning, Endre... I'm one of those people who has stubbornly stuck with saying "Merry Christmas." Let's face it, if we didn't have Christmas there would be no need for happy holidays. Of course, if I know someone is Jewish, I wish them "Happy Holidays or Happy Hannukah."

Michael Jacobs good morning, Michael... there were only two years in my life that I didn't have a Christmas tree up in my house... the first was when we moved to Abu Dhabi from Paris in the month of November and were living in temporary housing until I found a house. We spent two weeks in Kenya during Christmas and New Years that year. The second time was last year... I had knee surgery on December 8th and had spent all of November walking with the assistance of a walker... so Christmas decorating was somewhat past my abilities.

Kat Palmiotti hi Kat... I've heard of others putting up their trees on Christmas Eve. We celebrated German-style when I was growing up, so Christmas Eve was for church, family supper, and gift opening. Our tree would go up early in December for Advent and would stay up till Russian Christmas for my Grandmother who was Russian Orthodox.

Brian England good morning, Brian. I had a new Advent Calendar each year until I was 48, when my mother died. She gave me a new one each year all of my life and I looked forward to it. Then I had none for many years, until Debe Maxwell, CRS  learned of that through one of my Christmas posts and brought me one to my home a few years ago. I treasure that Advent Calendar, pack it away very carefully each year, and then put it up each December 1st (something I'm about to do again this year).

I love to hear that you and Debe Maxwell, CRS are friends, I treasure you both as friends of mine!

Brian England hi Brian... Debe and I worked at the same brokerage firms here in Charlotte, not once, but twice... albeit in different offices of these firms.

This is timely information to share. I do not think we have ever put up a tree before the end of November.

Roy Kelley good morning, Roy... typically, Thanksgiving weekend is my weekend to do my holiday decorating. Otherwise I start running out of time comes December.

Kathy Streib hi Kathy... my trees and decorations are all up as of last night. And that's my feeling, as well... just too much work if you can enjoy it all for at least a month.

Once again...we are of the same mindset!!!