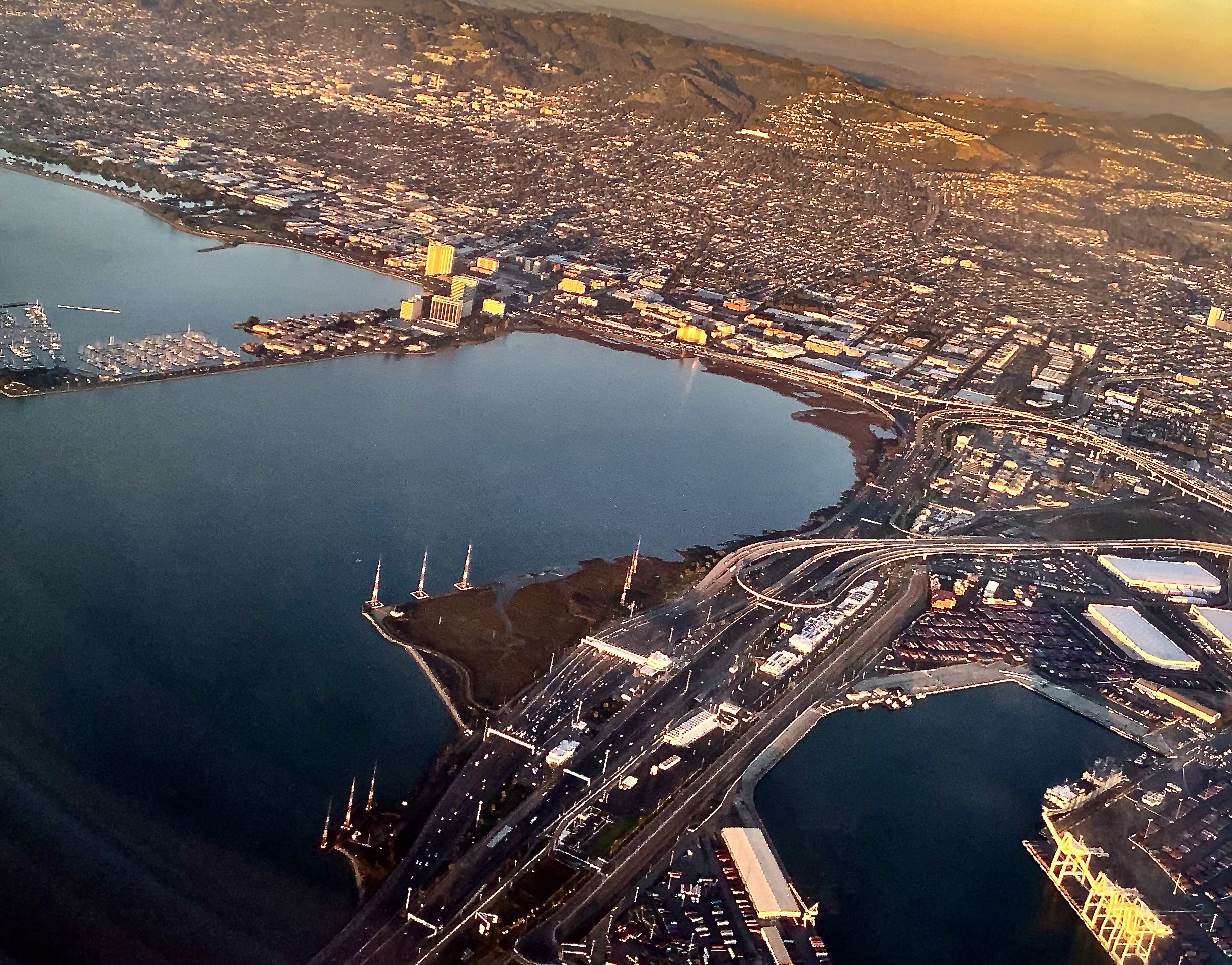 As we boarded the small United Airlines jet heading back to Santa Barbara, the pilot promised a tour of San Francisco at sunset. It was breath taking. It you have ever landed in San Francisco,  you no doubt know that the jets land and take off just beyond the water of the Pacific Ocean.  Looking out of the window, it feels like the plane is going to skim over the water, and fingers crossed, land on a solid tarmac. As we left civilization, the Monterey Peninsula came into view.  A mere 45 minutes later we were landing in Santa Barbara!

Grant Schneider We spent lots of time in San Francisco and had an office there (not real estate related).  We were well known to the airline we used, and they would always seat us in first class regardless of our ticket. They would be deadheading to Los Angeles on the evening flights.A

Wayne Martin It is a beautiful city.  We knew it inside and out, when were doing a lot of business there.  This time we were headed to the Napa Valley, and had lunch in the Embarcadero area. A

Patricia Feager, MBA, CRS, GRI,MRP I agree with you, I love Earth!  I hear that there is a strong possiblity that Elon Musk is considering hiring Brian England for his head of real estate on Mars.  🚀.  Happy Sunday!  A

Ron and Alexandra Seigel - if the rumors are right, Brian England is a lucky man! His blog posts and marketing will be out of this world!!!

As long as it includes room and board while I am working on Mars Ron and Alexandra Seigel and I love how supportive Patricia Feager, MBA, CRS, GRI,MRP always is!!!

Michael Jacobs I enjoy travel!  And in our married life we have logged millions of miles and amazing adventures.  Happy Sunday.  A

Buzz Mackintosh I know that airport well, we have taken off from there a few times.  Happy Sunday.  A

Wow, what gorgeous views! Looks like you had a beautiful clear day for San Francisco.

Hi Ron and Alexandra Seigel - Your shots are stunning.  Of course, I lose perspective when I don't have the Golden Gate Bridge in the picture.

Hello A and Ron and thank you for sharing these ever photos with you.  Never been in that airport.

Thank you very much for sharing your photographs.

I am now reading a book recommended by Dolores and I think you would like it.

Yes! I enjoyed The Paris Library very much!

Wow!  That is absolutely beautiful and I think you are all having too much fun today talking about Brian England heading to Mars!

We saw parts of that skyline when we were in San Francisco 3 years ago and it is very pretty.

As for airport landings, the scariest for me was landing in Little Rock, AK as the field is within the mountains and the only way is to just crest on mountain and make sure not to go into the next one when it lands

Hi Ron and Alexandra- What beautiful views!!! I love them. Try flying with Larry...he critiques each pilot.

Kathy Streib Our bestest friend is an Air Force Academy grad.  He was not a flyer because of his eyes, but they gave them a day to chose a division.  He joined the fighter pilots (which I am assuming Larry was one) and mentionned the skill and the prep it took.  Another friend we see on Sat in the wine country, is 99 years old was a fighter pilot in WWI was honored in Normandy for the 75th anniversary!  He still passes his medical test for his license and flies his plane...and want to still fly when he turns 100.  A

Carla Freund , we had beautiful views of the city.  A

Sheri Sperry - MCNE® The airport is all the way South in Daly City.  And the Golden Gate is way North of that along with the Bay Bridge. A

Ed Silva we have no been to Little Rock Arkansas, so I have no idea.  My mother told me tales of flying in small planes to Saudi Arabia with me as a little one, and the pilot tossing stuff out of the plane to lighten the load.  Perhaps that is why I have so little fear.  A

Roy Kelley Thank you for the recommendation.  I wil buy the book.  My grandfather sister ended up in Prague after the revolution and was head librarian.  I am sad that i did not get to meet her.  A

Will Hamm it definitely is an eye opener landing,  We have been there so many times, that it is ho hum for us.  A

Brenda J. Andrew I think that Brian England is having too much fun playing tennis and is ignoring us.  A

Brian England just shows how much we appreciate you, and the Arboretum in Phoenix is one of our favorites.  A

I was actually at the arboretum today enjoying the outdoors Ron and Alexandra Seigel and had no idea that I became a topic in the Rain today, haha.

Alexandra loved the post and the photos, sadly last time we were in San Francisco was about five years ago and we were so disappointed with the same thing that is happening in Los Angeles... people who should be institutionalized destroying the beauty of both cities... Endre