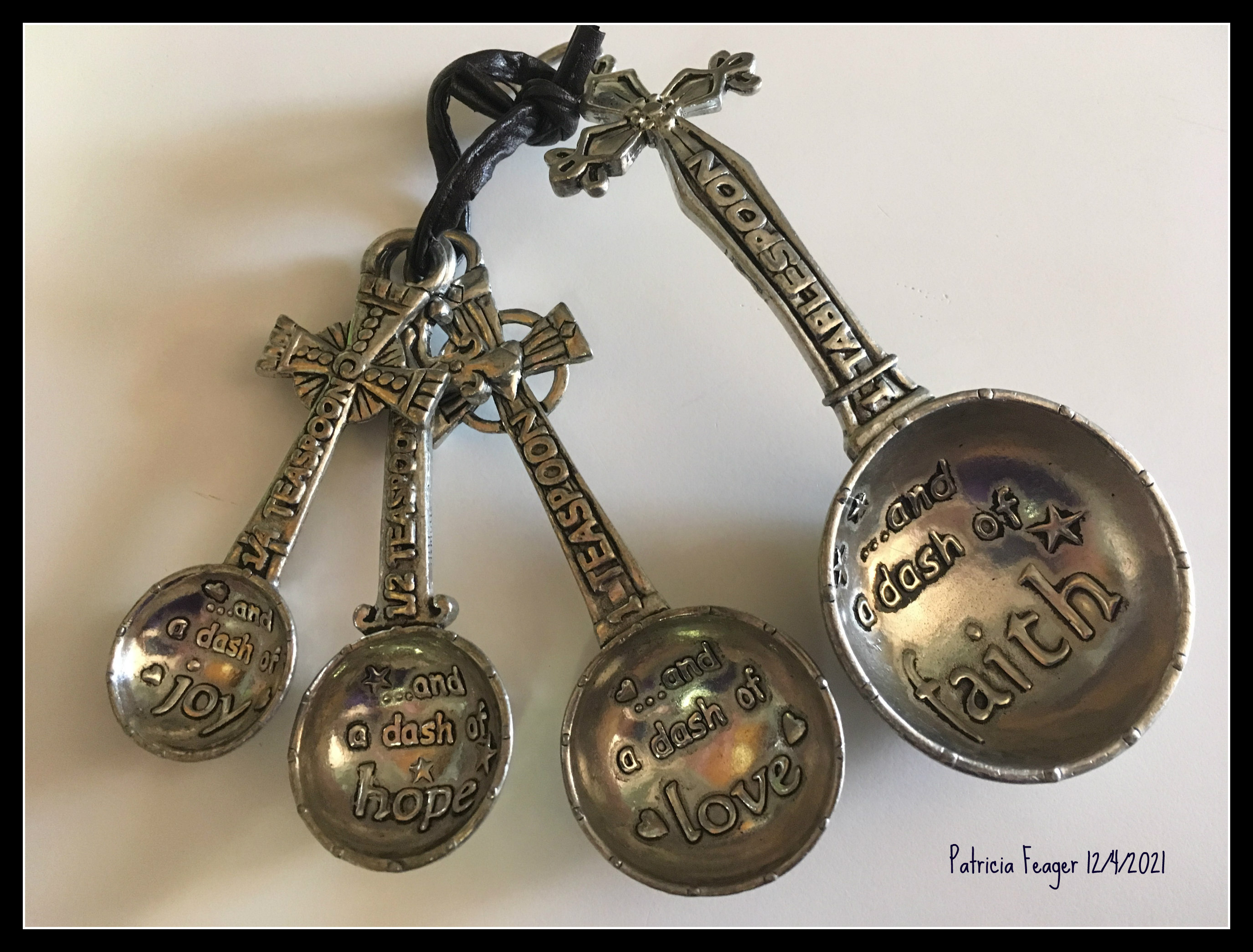 J is for joy. During this holiday season, it applies to the joy we give to others. Whether one gives something that is tangible or intangible, is irrelevant if it comes from the heart and changes someone’s heart. Give joy freely.

H is for hope. No matter how hard your life may be, others may have it worse. Hope can be the great neutralizer for someone else’s misfortune. Supporting others in good times and bad may play a role which is possible for the unfortunate to survive with dignity and respect.

L is for love. “It’s not how much you do, but how much love you put into what you do that counts,” said Mother Teresa. The first time I heard about Mother Teresa was when I began my college education. Those who read my previous posts and know something about me, may recall that I didn’t begin college until I was a single mother who had to raise and support my children alone. In a class on Critical Thinking, we had to write an essay about someone who influenced our lives. The Professor randomly selected students, and if your name was called, that person had to read their essay to the class. One student, a nurse gave a powerful speech about faith, hope, joy, and love and it was about Mother Teresa.  Then she went on to talk about why this nun was so influential to people around the world. Mother Teresa was alive but I never heard of her from my Catholic education. I listened while sitting on the edge of my seat but it was the last three words, she said that I never forgot. “I am an atheist.” It was in that moment, I realized, a miracle doesn't have to be because of who you are, whether or not you were raised with a religious education or any type of education, rich or poor, mother, nurse, or even a nun, every single person on earth can do great things for others and that in itself is a miracle. F is for faith. Every phenomenon, whether it be called faith, chance, fortune, or opportunity has a cause, also known as the principle. The principal is the beginning, the genesis of everything. For many people, everything good that has been accomplished is because of their faith. Now, I realize for some people there is no faith, joy, hope, or love, and perhaps they do succeed. But where there is joy, hope, love, and faith, religious or not, they can change the world because miracles really do exist---Patricia Feager

It wasn't until Mother Teresa died around the same time as Princess Diana that I began to fully know more and understand how this simple woman, Mother Teresa, went against everything she learned about being a nun in the convent to going out into the world, the poorest places in the world like Calcutta, and changed the world because of her joy, hope, love, and faith. She remains my great inspiration. This is my entry for the AR December Challenge for Andrea Bedard on miracles.

Hi Patricia,
Oh... I love your measuring spoon set!  Those 4 ingredients are the recipe for miracles.

Mother Teresa was so right about everyone being able to do small things, which really are big things to the recipients.   One of my favorite quotes by Princess Diana was: "Everyone needs to be valued. Everyone has the potential to give something back."

Thank you for your entry into our December Challenge.

Carol, I really didn't think I could participate in this challenge until this morning when I made pancakes. I pulled out my measuring spoons and as I was using the faith spoon, it suddenly dawned on me, that with faith, anything is possible. As the griddle sizzled and my coffee was brewing, I started thinking about the message I got this morning on joy, hope, love and faith and then I started composing after breakfast. Isn't it interesting how Princess Diana and Mother Teresa had a lot in common and how inspiration can come from something as simple as making pancakes?

I would like to believe that Mother Teresa was, and continues to be, an inspiration to everyone.

When we become the embodiment of love we can change the world!

The spoon set is a treasure!

Kathleen Daniels, Probate & Trust Specialist - I believe Mother Teresa is in Heaven. She was canonized a Saint on September 4, 2016. Love changes  everything. For a woman, a nun who took the vow of chastity, and had no children of her own naturally, she became one of the greatest mothers of the world!

Patricia those are four qualities that make a huge impact in our lives.

George Souto - When I reflect back as young as young can be, I remember singing songs with my family in the car or at home or school with my teachers and classmates, wonderful lyrics, such as: "You Gotta Have Faith, Hope and Charity, that's the way to live successfully," or "The Bible Tells Me So." Those values were instilled and I remain grateful for learning how impactful it made to me growing up and becoming an adult.

What a lovely take on miracles.  I enjoy and appreciate you take on things!  Brilliant! A

Ron and Alexandra Seigel - thank you! It means a lot to me.

John Pusa - Providence gives us many chances in life at different stages and challenges too!

Patricia Feager, MBA, CRS, GRI,MRP   You are right! no matter how hard things may get you must have HOPE - and Faith - others may and do have it worse - love and be joyful and thankful

Thanks, Hannah! I enjoy my measuring spoons lot and the reminders are always in my kitchen. Have a nice day!

Patricia loved your measuring spoons where did you find them?? Endre

Endre I bought the measuring spoons early on in my career in a local store somewhere in my area of DFW. I purchased a set for a client's gift and one for myself. They are a lot more durable than plastic and alway a good reminder to me. If I see them again for sale, I'll let you know!

What a lovely post, Patricia... and so clever linking these concepts to those gorgeous measuring spoons. That quote by Mother Teresa that you featured has always been a favorite of mine... a wonderful reminder that little things we can do also count and add up.

Nina Hollander, Broker - Your comments are always welcomed. It sounds like my spoons are becoming popular here on AR! Mother Teresa has done and said a lot of things to refresh my weary spirit and refuel my troubled heart when it is breaking.

Patricia, thank you for your thoughtful entry. I truly enjoyed reading you post and while reading it reflected most on hope. Perhaps it's that this time of the year brings out the best in people, and the promise of a new chapter is just around the corner but the Holiday season always renews my hope for a better future.

Hi Patricia! I love that Mother Theresa was so inspiring to you as she was to me as well. The more I read about her, the more I love her!

And, those measuring spoons are beautiful! I had a similar set that had birds but, these are just gorgeous!