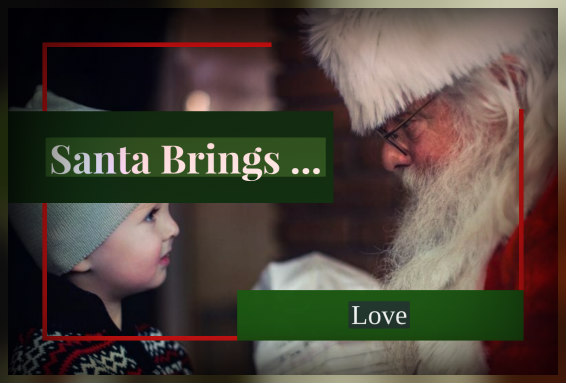 Do you believe in miracles?  What about Santa Claus?  Well, I believe in them both. Put them together and they can be powerful tools to help us through tough times.

They made need a little assistance though…

We all needed our spirits lifted after what happened to our country on September 11. Since the patriarch of my extended family was traveling to his middle son’s home in PA, I was put in charge of the annual Christmas Eve dinner for the family. No one felt like going out so we planned dinner at our home. Just before he left, Tom (the patriarch) reminded me that Santa ALWAYS makes an appearance at the Christmas Eve dinner.

I wanted to make the evening special.

For the children (Erin & Megan who were 5 & 3) I had a small table set up for them complete with battery-operated candles. It was a child’s picnic table that we placed next to the dining table.  There were Christmas poppers and little snow globes for them as well. The adult’s table had the same except we had real candles and adult beverages. Every place setting had a small miniature that was a clue as to who was supposed to sit there.

The best part was when there was a knock on the door and Santa showed up!  Eyes lit up and not just the children’s!!!

And that’s not all…

Our neighbor’s daughter was outside when Santa drove up and got out of the car. She slowly stood up and wanted desperately to run over to him. Thankfully her mom came out and distracted her.

Nineteen years later and after a year of being apart, washing our hands, and Zooming everyone, we were in need of some spirit-lifting.

We had just a small part of our family over 14, I think. For the first part of 2020, we would see everyone from afar…standing in the driveway while we delivered cookies or bread. We waved and shouted our hello’s.

By the end of the year, we were all dining out, getting our hair done, etc but respecting those who felt more comfortable not being so physically close. The children were a little down because they missed their other cousins and the large group we normally have.  And, finding a place to sit on Santa’s knee so you could recite your long list of what you wanted had been hard to find due to Covid.

Once again, I enlisted Jolly St. Nick to light up the room, and that he did.  Santa ( thanks to our neighbor, Jerry) arrived and the room came alive. Mini-me and Raffe jumped up and down and the adults could not take enough pictures!!!

Miracles and Santa are there. Sometimes they need a little assist…but they’re there!!!

Miracles only happen if you believe in miracles. Paulo Coelho

This is an entry in the December Challenge: ‘Tis the Season for Miracles & Scares hosted by Andrea Bedard and Carol Williams .

Two lovely stories of Santa's appearance and very fitting to the season.  Happy Tuesday. A

I love Santa's quote, and he's right. I, too, believe in the magic of the season and did my part assisting Santa to see the wonder in my children's eyes. Now I have teens, who've figured it all out a few years ago, but still believe in miracles.

Thank you for sharing your two Christmas miracle stories! Jumping with excitement.. that's the best reaction!

Good morning Kathy - those are both wonderful miracles.  Seeing joy in children's eyes is always a miracle.

Hi Kathy Streib - Leave it to Santa to put nothing but smiles and excitement on the faces of our little ones.  What a wonderful Christmas miracle!

Kathy I always taught that Santa wore boots as in the 2020 pictures, but did not realize the also sported a more casual look with loafers as in the 2001 pictures ........ LOL

We have had two very special Santas in our life. Both men were friends who took their role quite seriously. One has passed on. I believe the other (used to live across the street from us) is still playing his part and delighting children of all ages. It has been many years since we had Santa visit our home, but the memories of the years that Santa did visit are very special.

I do believe in Santa!!  And OMG Kathy - the kids jumping up and down in front of Santa couldn't be  any cuter and sweeter!  Made me smile ear to ear!

Santa is real and continues to live in our hearts, that is part of the magic of Christmas. Thank you so much for the touching post Kathy!

Wayne Martin I get so much joy and fun from bringing them all smiles on their faces.

You really do love children, don't you! Brian England

Michael Jacobs miracle worker and miracle lover. We all need them.

Nina Hollander, Broker I don't ever want to lose that joy, and I know you don't either!

Joan Cox I sent your post to both of my nieces (the one with the Santa letter.

Norma J. Elkins so glad that you enjoyed it!!!!

Carol Williams I agree...how could you not believe!!!!  I remember leaving cookies and milk and a small calendar with my birthday circled on it!!

I was one of those kids who was always disappointed after my visits to Santa.  I suspect it was the fake beards that always had me looking for the "real" Santa.  I love the video of Santa in your living room, and the children, especially the little girl jumping up and down.  So adorable!  She's a true believer!

I always took my role as Santa with a great deal of respect. My miracle came when every year a 90 year old man sat on my lap at a large event. Each year he had me guess how old he was and he said I was the only Santa that knew the answer. That lasted 7 years and on the eighth year his daughter came up and thanked me for being her dads favorite Santa 🎅

The shear joy in the kids eyes and faces is why I might wear the red suit every December.  This year, I have decided to wear it every day I go skiing in December too.

faye schubert I love doing these kinds of things. I may be the bigger kid.

Kat Palmiotti all is do is give things a little assist. And it sure makes me smile.

Roy Kelley Thank you and very happy to bring a smile to your face.

I agree Ed Silva If we can keep the kid inside us alive...that's the key.

Thank you Ron and Alexandra Seigel It's all about the spirit!

Andrea Bedard I've decided that the key in staying young is to have children in your life. They don't have to be your own but make sure you have them around...through your family and friends.

Like the smiles on those children's faces, you brought a smile to mine with your miracles!