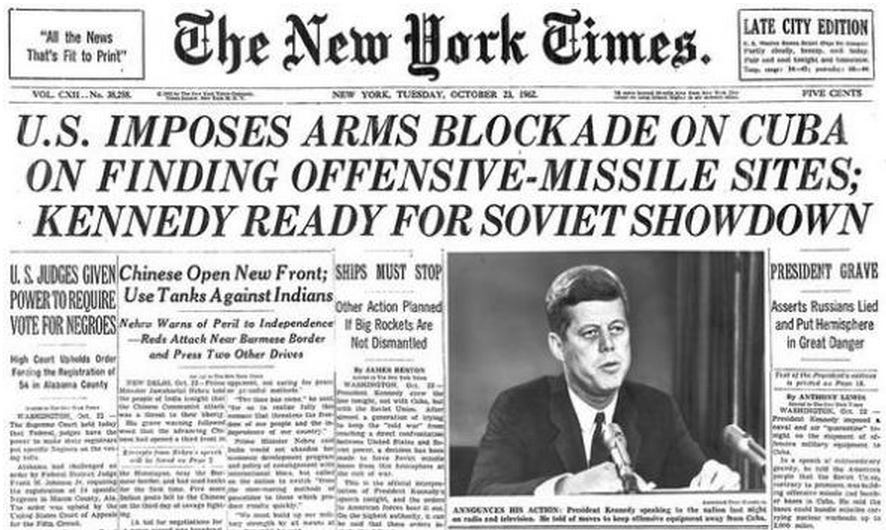 Christmas in 1962 was a scary time to be a kid. A new Christmas Carol was written in October 1962 with a Call For Peace...."Do You Hear What I Hear"...with symbolism as A Call from God or was it Streaming Missiles?

For some reason we (as kids) did not really understand we had air raid warnings at schools and we had to get underneath our school desks until the sirens ended. We were in the middle of the "Cold War" and Russians had nuclear warheads in Cuba pointed at the US Mainland. This was only 21 years after the sneak attack (80 years ago today) at Pearl Harbor by the Japanese resulting in the use of Nuclear Warheads to end World War 2. Missile silos were placed all around the world and we in America were dreading streaming missiles and their plume tails flying across the sky destroying cities world wide in a nuclear devastation of mankind.

"The Cuban Missile Crisis of October 1962 was a direct and dangerous confrontation between the United States and the Soviet Union during the Cold War and was the moment when the two superpowers came closest to nuclear conflict. The crisis was unique in a number of ways, featuring calculations and miscalculations as well as direct and secret communications and miscommunications between the two sides. The dramatic crisis was also characterized by the fact that it was primarily played out at the White House and the Kremlin level with relatively little input from the respective bureaucracies typically involved in the foreign policy process." https://history.state.gov/milestones/1961-1968/cuban-missile-crisis In October through November 1962, the US circled Cuba with a naval blockade and installed in a counter measure pointed nuclear missiles at Russia based in Turkey...the world was on edge!

Do you Hear What I Hear? A Christmas Hymn or Air Raid Warning...

Listen to the symbolic lyrics in Bing Crosby's rendition of Do You Hear What I Hear...written in October 1962

"Do You Hear What I Hear?" was released shortly after Thanksgiving in 1962. It was first recorded by Harry Simeone Chorale and sold more than a quarter-million copies during the 1962 holiday season. Bing Crosby recorded the song in 1963, which made it a worldwide hit.

Regney was inspired to write the lyrics "Said the night wind to the little lamb, 'Do you see what I see?'" and "Pray for peace, people everywhere" after watching babies being pushed in strollers on the sidewalks of New York City. Shayne stated in an interview years later that neither could personally perform the entire song at the time they wrote it because of the emotions surrounding the Cuban Missile Crisis: "Our little song broke us up. You must realize there was a threat of war at the time".

"Do You Hear What I Hear?" tells a story loosely based upon the story of the Nativity of Jesus as told in the Gospel of Matthew, incorporating fragments of the annunciation to the shepherds from the Gospel of Luke, though Jesus is never mentioned by name or explicitly identified. A "night wind" tells a lamb of a star, following which the lamb tells his young shepherd that he also hears a loud song. They are each led to a "mighty king," whom they tell of a child in the cold and ask to bring the child silver and gold (much as the Biblical Magi, which in tradition with prophecies in the Book of Isaiah and Psalm 72 are often characterized as kings, did with their gifts of gold, frankincense, and myrrh). The king proclaims a prayer of peace and announces that the child will "bring goodness and light". The lyrics are inconsistent with the response of Herod the Great, the reigning monarch over the region at the time, who feared the arrival of a new "king of the Jews" and ordered the child massacred. The Magi did not receive word of Christ's birth from the shepherds (who instead went directly to Bethlehem), but by noticing an astronomical event, interpreting it as a new Jewish king, and going to Jerusalem, where Herod informed them of Old Testament prophecies and pointed them toward Bethlehem.".....Wikepedia

A Miracle?  "Do You Hear What I Hear" and the Crisis Averted November 1962

At the time this new hymn was released, as the final verses of the song said "People Pray For Peace Everywhere"...there were prayers and pleas for peace all around the world. Then on November 30, 1962, shortly after the first recorded song was released... a treaty was signed and the immediate Cuban missile crisis was averted as the world took a sigh of relief. A Christmas miracle? God knows.

Gloria Adele Shain to a Jewish family[2] in Brookline, Massachusetts, on September 4, 1923, daughter of Attorney Mark Shain and Professor Rose Wies Shain, she grew up next door to Joseph and Rose Kennedy and their children, including John F. Kennedy. She began her music career as part of a singing trio, The Shain Sisters, alongside her older sisters, Esther and Thelma.[1] She changed the spelling of her last name from Shain to Shayne early on in her career for professional reasons.[1] She earned her bachelor's degree from the Boston University School of Music.[1] She moved to New York City during the 1940s, where she worked as a pianist performing on demos and in front of live audiences.[3] She also arranged music for composers such as Stephen Sondheim and Irving Berlin.Shayne met her first husband, French born Noël Regney, "....Wikepedia What an interesting post Jeffrey!  I remember those songs but was too little to truly have any idea of what was going on in the world.  I also remember the getting under our desk thing which now seems totally useless.  But, for some reason that's what they had us all do.  We're still praying for peace....and lots of it.

Hello Jeff - while I was too young to realize what was going on when it was actually happening in 1962, I can imagine the scary times that were felt.  Music-wise I remain just as clueless today as back then.

I remember my father talking about this.  And I had no idea that its the story of this song.  Interesting story.  A

Jeff - I too found this to be an enlightening story. I remember the drills where we got under our desks and how frightened the adults were. I also love that song but until now had no idea of the meaning

Interesting story about the song. As for the desks, I remember the drills where we had to hide under our desks. I don't think that would have been helpful at all.

Thank you Jeff Masich-Scottsdale AZ Associate Broker,MBA,GRI, thank you for sharing this insight into history and the Christmas miracle of 1962! I learned something new today, I did not know that this was the song's story.