The attack on Pearl Harbor was a surprise military strike by the Imperial Japanese Navy Air Service upon the United States against the naval base at Pearl Harbor in Honolulu, Territory of Hawaii, just before 08:00, on Sunday, December 7, 1941. ... The attack commenced at 7:48 a.m. Hawaiian Time.  After hearing of the attack the next morning, President Roosevelt said, "Yesterday, December 7, 1941 — a date which will live in infamy — the United States of America was suddenly and deliberately attacked by naval and air forces of the Empire of Japan." 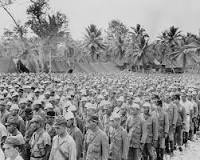 Wednesday September. 2, 1945, was the surrender of Japan to the United States, when documents were signed officially ending years of bloody fighting in a ceremony aboard the USS Missouri in Tokyo Bay. It's known as V-J Day in some countries.
Like favorite_border
favorite_border 0
Re-Blog
repeat 0
bookmark_borderbookmark