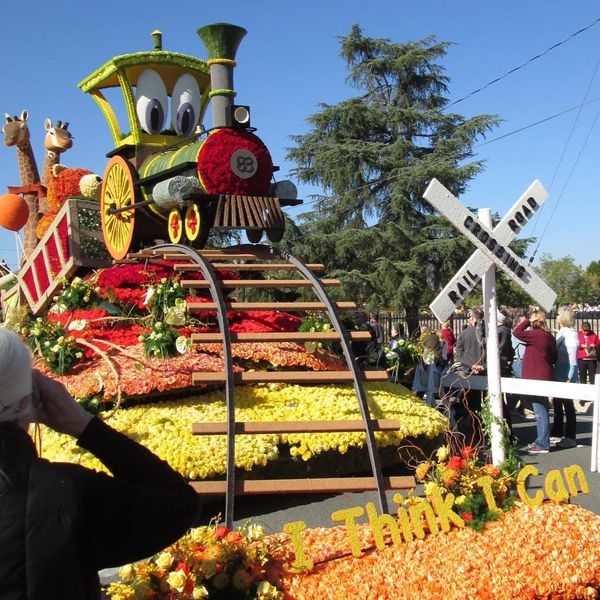 I actually think that

the most efficacious way of making a difference

is to lead through example

is setting a good example

of how to behave in the world.

Who could disagree, right? The word efficacious was not one I have ever used. Some quick thinking allowed me to fill in the blanks as to its probable meaning. That works so much of the time, doesn't it?

Eventually, I found my way to an online dictionary and thesaurus to verify my initial thoughts. Just in case.

I also thought of what other word could have been used. And why not? People choose words and all sorts of things for many reasons. I digress. . .

Sundays are ideal for exploring. As it turns out, it can happen any day. And why not?

The photo in this post is from a float in a previous year's Tournament of Roses parade which is held each January 1 in Pasadena, California.

And, by the way, efficacious is defined by Merriam-Webster as having the power to produce a desired effect. Happy Sunday.

Surely, sir your vocabulary is anything but infintesimal. In my opinion

Ed Silva - that's interesting you used "I think I can. . ." and repeated it three times because I was going to use it as part of this post but cut it before publishing.  😃

Dorie Dillard Austin TX - the details and creativity used each year in the floats are unbelievable but obviously quite real.

Will Hamm - I am a member of that club too as I have yet to use that word.

Ron and Alexandra Seigel - some words seem to "fit" the conversation or flow of thought even when we may not always use them.

Kathleen Daniels, Probate & Trust Specialist - the ability to look up word definitions is certainly enhanced by the introduction of the Internet.  As the AR contest you're co-hosting this month proves.

Rocky Dickerson - I try to regularly add to it.

OMG, you took me back to my nursing days with this term, Michael!

Efficacious is routinely used in the medical profession when discussing the effectiveness/results of various therapies, including medications. I used to date a medical sales rep who would practice his presentations on me. My only critique was that he overused that word - no kidding!

Debe Maxwell, CRS - your comment gave me a "flashback" moment.  I didn't think I had previously encountered that word, but you put it into a context that "pulls" it together.  Thank you for that as well as the laugh that resulted from imagining that guy "practicing his presentation".  Too funny.  🤣

Hi Michael- I often use the word efficacy but rarely efficacious. Don't know why!  Love the quote and I remember the posts you've done on the Tournament of Roses floats.

Roy Kelley - I hope your week is off to a great start and hope the snow-shoveling is down to a minimum too.

Kathy Streib - it seemed kinda appropriate to find some photos of parade floats from past this month as a bit of a homage to those days.

Good Tuesday morning, Michael. My morning was spent on our estate planning. It is time to update our wills.

Roy Kelley - it's good to be kind.  To others and to ourselves.  It's important too.   Often, if not always.

I always feel honored to have comments from such a beloved member of ActiveRain. Thank you Michael.  I hope you had an awesome Tuesday 🙂

Michael, we hope to "make a difference" in every transaction we have.   Hopefully our clients feel the same way!

What a wonderful word. And yes, while you can fill in the blanks in terms of how a word is used, it's best to confirm its meaning. My daughter, with a nursing degree, also introduced me to the word. Used as Debe describes.

Debb Janes EcoBroker and Bernie Stea JD - everyday life and the extraordinary people in it introduce us to all sorts of things including words.

I don't know how I didn't know your daughter was a nurse, Debb Janes EcoBroker and Bernie Stea JD but, now I understand the connection!

Glad to spark a memory, Michael Jacobs - that happens to me all of the time! As you said, our lives and the amazing people in it, offer up a wide variety of life's experiences - and things like words. Isn't life so grand?!

Debe Maxwell, CRS - ActiveRain "teaches" us so many things.  Not only in the posts we read but comments left by others and replies.   Plus the insights gained from questions and answers.  It can (and does) lead in (and to) many directions.

Michael not sure how I missed this great post, and like you I believe in Leadership is set by example... unlike politicians and some AR Ambassadors using the do as I say not as I do philosophy:))Endre

Endre Barath, Jr. - it's easy to "miss" posts on ActiveRain as the blog roll sometimes seem to speed by us especially when time is not on our side.  Thank you for finding it and your comment.