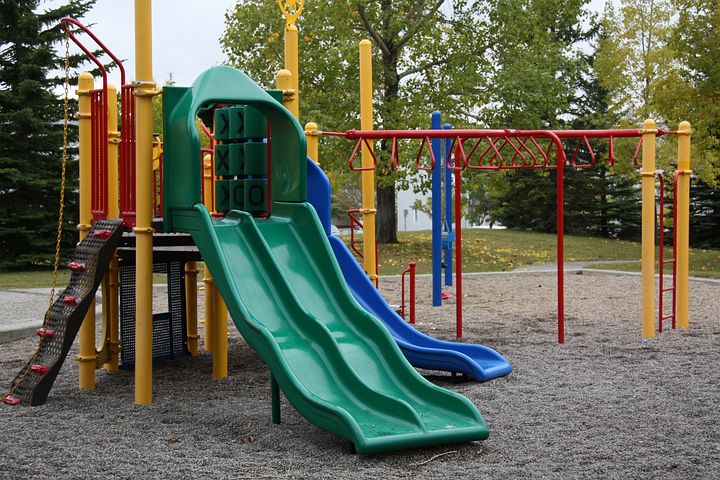 I grew up with merry-go-rounds, see-saws, monkey bars over hard ground, and hot metal slides in blazing hot Southern sun.  We played Red Rover and dodge ball and other games that would never fly in modern times!  And while it might have seemed chaotic, there were rules of the playground.  Don't cut in line, stay inside the playground fence and you can't beat gravity.  Break the rules and there were penalties.

Fast forward a handful of decades and my playground has changed, more often virtual than physical, but there are still rules for each playground.

Here in ActiveRain there are some written rules (e.g. the Community Guidelines).

Don't write content that will get the community in trouble.

Then there are various unwritten rules and you may or may not agree (or comply with).

An expectation that certain topics are more or less off-limits (politics, sex, religion) for the sake of the community well-being and avoidance of becoming ActiveRain Fight Club.

And while the playground may have changed from my youth until now, there are still penalties for breaking the rules. Kicking people in the shins comes with a cost.  Maybe it's less engagement, maybe it's an addition to a "no referral" list.

We can make the ActiveRain community as social or as business oriented as we each choose to, with the understanding that how we follow the rules of this playground has both positive and negative consequences.

Ultimately, I don't own this playground and don't control what happens to it.  I trade my time and content for Ben keeping the lights on and the doors open in what I hope is a win-win for everyone.

Until next Tuesday, just Ask An Ambassador if you need help,

Groups:
Ask An Ambassador
Bartender, Make it a Double
Bananatude

Hello Bill(and Liz too) - while there can be a few playground faux-pas from time to time, the ActiveRain sandlot is a relatively civil place.  Well  in the social media world as well as the everyday world where we currently live.

Hi Bill what a great analogy!  AR is a great playground and far more folks are respectful of others, at least that's what I've experienced over the years.  Everyone once in a great while up pops a playground bully......which typically doesn't last long - thankfully!

I think the fact that this community typically works so well with each other makes it even more obvious when someone fails to "get it".

I think so too Bill.

This is a wonderful analogy.  Like many have said in their comments, this is a relatively sane place.  And I make sure to play with those who want to play and not disrupt. A

I have the folks I'm willing to play with, and those that I avoid.

Good post reviewing the rules of the road here.

Just understanding the basics can make it a better experience for all of us.

It seems to me Bill of Liz and Bill Spear that some people feel like a comment is kicking them in the chins (OUCH) and taking a comment personally when a comment is general in nature.

I deleted my own comment the other day because the author was clearly having a hissy fit. No doubt felt my comment was directed at them and it was not.  We never know if we may inadvertently hit a nerve with people.

Avoiding politics, sex, religion is my mantra. If those conversations are had, they are had privately.

Thank you for all that you do for this community.  I appreciate you.

It's the challenge with a flat medium, sometimes tone and intent don't transfer.  I think there can be exceptions to avoided topics, e.g. I'm not adverse to mentioning my religion as it relates to some of the local community events our church has held (Build the Walls).
And you're welcome!

Keep the sand in the sandbox :)

I am still cringing over the thought of literally being kicked in the shins.

It reminds me of all the times I have banged my shin or knee on a coffee table.

Fortunately in my soccer goalie days I had shin guards that protected me against most kicks to the shins :)

I have yet to read a post of yours that I have not thoroughly enjoyed and benefited from and this one will be added to that group... Thanks, Bill

Beth, Always happy to give you a reason to smile :)

Yes I remember when children did childish things and decided not to take responsibility. Too bad some folks still want to do that. Luckily the other 99% are far nicer.

I took some knocks in my playground days, fortunately the majority of physical knocks are not new knocks, but remnants of my old mistakes.

Great post!  Playgrounds have really changed over time (I am old enough as you to remember Dodge Ball and really liking it!), but following the rules should always be important to us.

Some level of order maintained keeps the community functioning smoothly (for the most part).

I think many confuse rule adherence with censorship.... and that's unfortunate.

We all make a willing trade when we enter the ActiveRain doors.  We have someone host and do all the technical work to keep the site functioning, and we get to play in the playground based on the owner's rules.  I don't have an issue with that.

Thank you for this post. Kicking shins or sand at others, whether in the sandbox or on the beach is never well received. Most of the time (I think) if I see a post or comment that I do not agree with, I move along without commenting. Other times, when someone has been personally attacked, I likely do not let that go unchallenged. Many of us have strong opinions but Bullies do not belong here, IMHO.

We all have a Gandalf line of "you shall not PASS!!" that switches us from observer to guardian.  Fortunately not too often needed in this community.

That's a great analogy for the AR community. And it works pretty well for the most part.

Sadly the social media world that has developed seems to adhere to a different set of rules...and they may be few and far between...than many us grew up with on those playgrounds. And it's not just generational!

Jeff, true, the age range of people that are running roughshod over each other on social media is across the entire spectrum of ages.  It's a false perception that there are no consequences for bad behavior.  Sometimes the consequences may be minor (so how long would it take someone to notice on Facebook that a particular person no longer follows/likes/comments?), other times I could see a broker hauling an agent on the carpet and sending the agent off to seek another office if the broker became aware of what was being associated with their office name.

Things are much better when everyone is following the rules and when the rules actually make sense, haha.

Wherever there is a large group of people, differences will inevitably erupt in how we handle things.  This is a people platform and not everyone sees things the same way or acts the same way.  Boundary testers are always the ones that get upset when they trip on the boundary they just crossed.

Playing nice and being respectful is the best advice.  When I feel my feathers ruffled, I check out for a while.  I can only control my own reactions.  It's amazing what time away from social media platforms, here included, can do for someone's perspective.

A lot of social media outlets I'm not present on.  Facebook I found I had to do some serious filtering over the last 5 years to flush the negative out.

Thanks for the group feature! I do feel like this is a online network where most follow the rules, with only the occasional rule-breaker. And I agree with Kathleen Daniels, Probate & Trust Specialist that sometimes things we write may strike a nerve, unintentionally. That's just another thing to keep in mind - the written word comes without the facial expressions and eye contact. Something that might be said with smiles in person might be taken in another context in writing. We just have to pay attention to our perceived tone as well.

You never know with an audience this large who might have a hot button over some statement.  Some are easy to predict, others...where did THAT come from?

And as a former soccer goalie, if you can run more than 18 yards you're probably home free!

I think it speaks volumes that any real conflict stands out like a sore thumb in the Rain, while it is commonplace on most sites.

Matt, it's one of the reasons I'm  willing to be here daily, even if it might just be in lurking mode.

There are forums where you can find sex, politics, religion, and whatever may be your interest. Active Rain is not one of those forums. If the AR rules of engagement do not suite you, there are alternatives.

Exactly, plenty of other places to go if one MUST discuss the topics that don't fit here.  Have at it, just not here!

No kicking in the Funyuns! LOL LOL LOL

REALTORS(R). Serving Warren County Ohio and adjacent areas from Cincinnati to south Dayton. Observing and reporting on real estate and related topics to help your quality of life! And if you're asking where is Warren County Ohio? We fill the space between Cincinnati and Dayton. Perfect for enjoying the bigger cities without living in them. Places like Mason, Lebanon, Springboro, Waynesville, Franklin and more. Plus lots of rural properties available too. We work with both residential home buyers and sellers and have extensive knowledge of low maintenance living options (patio homes, condos, etc.).