Golden Hill (2016) by Francis Spufford, a work of historical fiction, provides an interesting story in the setting of New York when it was still a small town on the tip of Manhattan Island in 1746. Click on the links to learn more about the author and this novel. Spufford began as a writer of non-fiction, though always with a strong element of story-telling. Among his early books are I May Be Some Time, The Child That Books Built, and Backroom Boys. He has also edited two volumes of polar literature. But beginning in 2010 with Red Plenty, which explored the Soviet Union around the time of Sputnik using a mixture of fiction and history, he has been drawing steadily closer and closer to writing novels, and after a slight detour into religious controversy with Unapologetic, arrived definitely at fiction in 2016 with Golden Hill. It won the Costa First Novel Award for 2017 and three other prizes, and was shortlisted for three more. His next book Light Perpetual, due February 2021, shifts from New York to London, and from the eighteenth century to the second half of the twentieth.
Spufford studied English at Cambridge University. He was a Royal Literary Fund fellow at Anglia Ruskin University from 2005 to 2007, and since 2008 has taught at Goldsmiths College in London, where he is Professor of Creative Writing.

New York, a small town on the tip of Manhattan Island, 1746.

One rainy evening in November, a handsome young stranger fresh off the boat pitches up at a counting-house door in Golden Hill Street: this is Mr. Smith, amiable, charming, yet strangely determined to keep suspicion simmering. For in his pocket, he has what seems to be an order for a thousand pounds, a huge amount, and he won't explain why, or where he comes from, or what he can be planning to do in the colonies that requires so much money.

Should the New York merchants trust him? Should they risk their credit and refuse to pay? Should they befriend him, seduce him, arrest him; maybe even kill him?

As fast as a heist movie, as stuffed with incident as a whole shelf of conventional fiction, Golden Hill is both a novel about the 18th century, and itself a book cranked back to the novel's 18th century beginnings, when anything could happen on the page, and usually did, and a hero was not a hero unless he ran the frequent risk of being hanged.

This is Fielding's Tom Jones recast on Broadway - when Broadway was a tree-lined avenue two hundred yards long, with a fort at one end flying the Union Jack and a common at the other, grazed by cows.

Rich in language and historical perception, yet compulsively readable, Golden Hill has a plot that twists every chapter, and a puzzle at its heart that won't let go till the last paragraph of the last page.

Set a generation before the American Revolution, it paints an irresistible picture of a New York provokingly different from its later self: but subtly shadowed by the great city to come, and already entirely a place where a young man with a fast tongue can invent himself afresh, fall in love - and find a world of trouble. 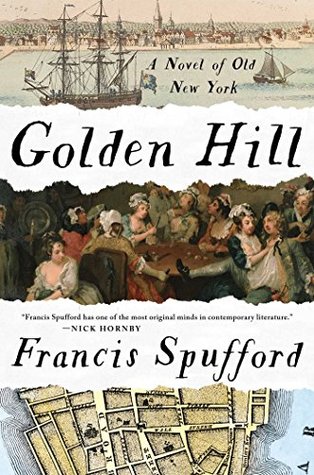 Good morning Roy. Will add this to my list. Presently reading a very long book, 996 pages, and making progress. Enjoy your day.

Good morning, Roy... another author I've not heard about. Thank you for these posts... I really enjoy them.

I hope you will read and enjoy this novel.

I am so happy you brought your book series back.  Reading is one of my favorite pastimes. A

Sounds wonderful, i am so fascinated in History, and especially the Revolutionary Period.  Well, it is Friday-Eve, have a very productive Thursday, Thanks for a great post. bill

Another good book to add to the list. Enjoy!

Good morning Roy! Sounds like a fascinating read - especially for those who love history

"Golden Hill" by Francis Spufford sounds like a great read for bookworms, Roy.

Roy, hadn't seen any book reviews in a while, thought you had stopped reading.

Sounds great! Takes place a little later than "The island at the center of the world," by Russell Shorto, which I finished earlier this year.

Dolores and I have read The Island at the Center of the World and Amsterday, A History of the World's Most liberal City by Russell Shorto.

Ah, did not know of the second one. Gotta check it out in the future.