The World Played Chess (2021) by Robert Dugoni is a excellent novel and I recommend it for your reading list. Click on the links to learn more about the author and this book.

Robert Dugoni is the critically acclaimed New York Times, Wall Street Journal, Washington Post and #1 Amazon bestselling author of the Tracy Crosswhite police series set in Seattle, which has sold more than 8 million books worldwide. He is also the author of The Charles Jenkins espionage series, the David Sloane legal thriller series, and  several stand-alone novels including The 7th Canon, Damage Control, and the literary novels, The Extraordinary Life of Sam Hell - Suspense Magazine’s 2018 Book of the Year, for which Dugoni’s narration won an AudioFile Earphones Award and the critically acclaimed, The World Played Chess; as well as the nonfiction exposé The Cyanide Canary, a Washington Post Best Book of the Year. Several of his novels have been optioned for movies and television series. Dugoni is the recipient of the Nancy Pearl Award for Fiction and a three-time winner of the Friends of Mystery Spotted Owl Award for best novel set in the Pacific Northwest. He has also been a finalist for many other awards including the International Thriller Award, the Harper Lee Prize for Legal Fiction, the Silver Falchion Award for mystery, and the Mystery Writers of America Edgar Award.

Robert Dugoni’s books are sold in more than twenty-five countries and have been translated into more than thirty languages.

In 1979, Vincent Bianco has just graduated high school. His only desire: collect a little beer money and enjoy his final summer before college. So he lands a job as a laborer on a construction crew. Working alongside two Vietnam vets, one suffering from PTSD, Vincent gets the education of a lifetime. Now forty years later, with his own son leaving for college, the lessons of that summer—Vincent’s last taste of innocence and first taste of real life—dramatically unfold in a novel about breaking away, shaping a life, and seeking one’s own destiny. 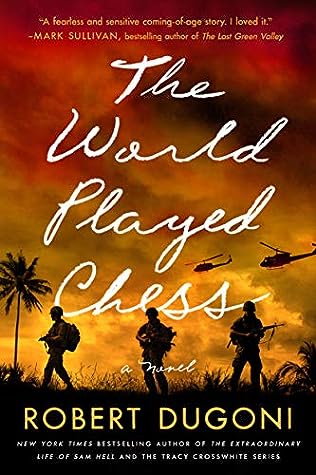 Good morning Roy. You are on a reading binge that has my reading list a project in itself. Keep it up and enjoy your next read.

Good morning, Roy... this sounds like a fascinating book. I'll keep a look out for it.

I hope you will read and enjoy this book.

Hi Roy,
This does sound like an interesting read.  Thanks for the recommendation.

I so love a good thriller book.  Have a productive day, and Merry Christmas. bill

What an interesting plot and the title is very intriguing .  It summons all kinds of  curiosity.  A

I would read this book just for the title, but the story line does sound intriguing too.  Thank you for the recommendation.

"The World Played Chess" sounds like a great read for the bookworms out there, Roy.