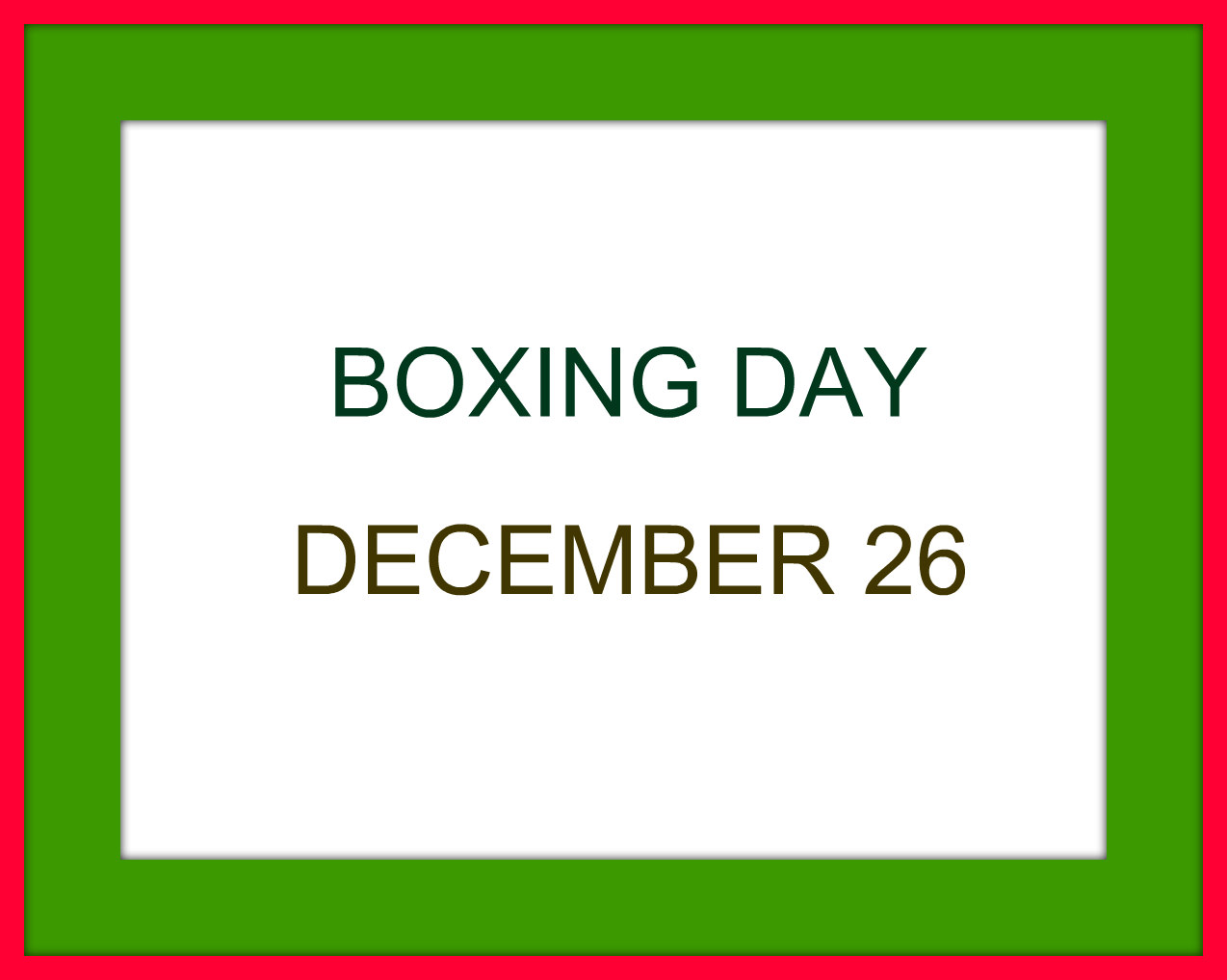 The day after Christmas (December 26) is a pubic holiday in Britain, Canada, Australia, New Zealand, and other Commonwealth countries. Today, many people in the United States enjoy boxing day too! For those who received cash or gift cards this can be a very exciting day. Believe it or not, it has been recorded that boxing day began in 1663. The idea for boxing day began in Britain and the shopping disease for people who like to shop has remained a big tradition around the world.

For people who have to work on Christmas Day this can work to their advantage and for those who love to shop for the  thrill of finding bargains, shopping often begins early in the day. Some people save lots of money by buying gifts for next year at a cost savings and keep have them ready for next year.

It has been told that the idea for collecting for the poor started during the Victorian era (1837-1901) and churches began putting out boxes for church donations.

If you're a Beatles Fan, you might want to play your sound tracks and sing "I Want To Hold Your Hand" and I Saw Her Standing There," since 1963 marks the anniversary of when these two famous Beatles hits were released in the United States. Do you remember when the Beatles bobbing heads where popular? Did  you have a Beatles haircut? I didn't have either but I did fake a pretty good Brittish accent with my friends  and wore white Go-Go boots! No matter how you spend your day, if you are not relaxing, singing Beatles songs, or shopping on Boxing Day, I hope you have a very nice day!

Good morning Patricia. My Boxing Day consists of getting down the boxes so the Christmas ornaments can be stored away for next year. Enjoy your day.

Wayne Martin - WOW! You waste no time taking down your Christmas ornaments! I hope you get the job done and find time to relax.

I don't believe that I have ever participated in boxing day but perhaps I have without knowing it, haha.  I hope that you had a wonderful Christmas!

Brian England - I'm not a shopper and never participated. Crowds never thrilled me. I hope you enjoyed your Christmas!

Good morning, Patricia... I did not have a Beatles-style haircut. Nor did I have go-go boots (in any color). My mother didn't allow it. But I do remember those Beatles' songs and still know all the words to them. Happy Boxing Day to you. (I'll be cleaning my office today.)

Nina Hollander, Broker - It's always nice to hear from you! When I think of the Beatles, I think of "Yesterday!"

Happy Sunday to you.

Do you know what other famous event happened in 1963?  I was born!  I did become a fan of the Beatles a few years later, but I never owned any white go-go boots. I can't dance!  I did own cowboy boots sometime around late 1970 something.

Raymond Henson, eXp Realty - WOW! A STAR was born in 1963! I did not know that about you! I was alive but not a teenager when the Beatles began their band but weren't they great! I liked their music until it got Psychedelic. With or without Go-Go boots, I couldn't dance either. 1970's were popular with cowboy boots, Stetson Hats, and of course everyone who was anyone wore blue jeans!

For retailers it is a day to get large boxes for the returns that re sure to happen. Also, a day to start deep discounts so as to get clear of inventory and make the year end business inventory easier to record. Have a great day

Ed Silva - Inventory has to move, but will it? I only went to a couple cities to shop around before Christmas for my granddaughter but I have to say, everything looked OLD! I wonder what effect the lock-downs had on store merchandise? I hope you enjoy your day!

I recently read what "boxing day" really was, and it was so interesting.

I do remember the Beatles very well and I had to have a pair of "go go boots".

faye schubert - Wasn't there a lot of good information about the history regarding boxing day? I was very surprised myself but didn't want to load this blog down with all those facts. I'm glad to hear you read about it too!

Wearing go-go boots was so much fun!

Hello Patricia - my first memories of Boxing Day may not go back as far as its origination or even December 26 each year, but it included this advice from my Mother who wanted the house removed of signs of Christmas decoration before the start of the new year.  It was quite the different approach from the woman across the street who kept her aluminum tree with blue bulbs in place until February (or was it March?) each year.   Perhaps this is an example of "meeting of the minds".  Maybe.

Thank you for sharing another post where the thoughts and ideas presented have allowed me to ponder.  I appreciate that in many of the writings you have shared in ActiveRainLand.

Michael Jacobs - Oh yes, my mother had rules too. She was the BOSS! That's pretty funny about your neighbor across the street! I had an eccentric woman who lived alone who lived directly across the street from me too. I don't know if she ever put up a Christmas Tree, but it appeared that no matter what the weather was like, she sat on her front bench and spied on everyone. We (my mother and all the people in the neighborhood) called her Nosey! She was the neighborhood gossiper. Too bad she didn't live across the street from the lady with the aluminum tree with her blue bulbs! As always, I enjoy your comments!

In my experience France and Italy observe Boxing Day also when we visited.  I was communicating with my niece who is living with her new husband in London, and she was telling me how her sweet mother-in-law is making a charcuterie board for Boxing Day.    It is sunny and bright today after a major downpour yesterday, and tomorrow more rain...A

Ron and Alexandra Seigel - you're lucky to have so many cultured family, friends and life experiences! It was foggy this morning here in Flower Mound - a very unusual occurrence. The sun is starting to peak out behind the clouds. I'm sure glad to hear your weather is finally sunny and bright! Enjoy the light and brightness of this day! Perhaps the rain will move on by...

Enjoy Boxing Day and have an outstanding week.

Roy Kelley - I'm sure those who celebrate Boxing Day will get their exercise. I wish you a great week too!

Thank you for exposing the history of boxing day. I must admit I was not as well informed as I thought Patricia. I hope you have a wonderful Sunday 🙂

Paul S. Henderson, REALTOR®, CRS - There is a lot of history behind Boxing Day. I just didn't want to re-write history. It's quite interesting how it all evolved. I hope you have a beautiful day!

Good morning, Patricia.
I hope you had a wonderful Christmas Day.

My husband was born and raised in Canada so I am familiar with Boxing day. I love the premise of Boxing Day.  As for what my day holds, it falls into the "relaxing" category.

Carol Williams - You are packed with information about Boxing Day! I hope you have a very relaxing day and that it will be happy too.

Patricia I had not heard of "Boxing Day" before reading your blog.

George Souto - It's good to learn something new every single day! I'm glad to hear you learned something new as a result of my blog post! It's a good day every day you learn!

I received several gift cards for presents this year.  However, I didn't have any motivation to get out of pajamas to go spend them this Boxing Day!  I guess I'll need to wait until the rush subsides!

Myrl Jeffcoat - I understand. Meeting crowds head-on is not my thing. I also never got into gift cards either. Somewhere, I'm sure there is a stack of them somewhere around here from long ago. By now, mine are probably worthless. I hope you put yours to good use!

Patricia we went to Vroman's  for the after Christmas Sale and bought all of our Christmas Cards for next year so we did what the message is from Boxing Day??Endre

Endre Barath, Jr. - Good for you! I must confess, I never lived anywhere where there was a Vroman's store. Out of curiosity I found it and WOW! I was impressed. It is so much more than just a book store! I really liked that giant pillow, "Life without a Dog is Possible, but what's the Point?

The mural in the kid's section is beautiful. It reminds me of my Kindergarten. I had a classroom and a separate room with murals on the wall. I remember I was always more fascinated with the pictures on the walls instead of the toys.

And they sell wine too! WOW! Now that's a good business!!!