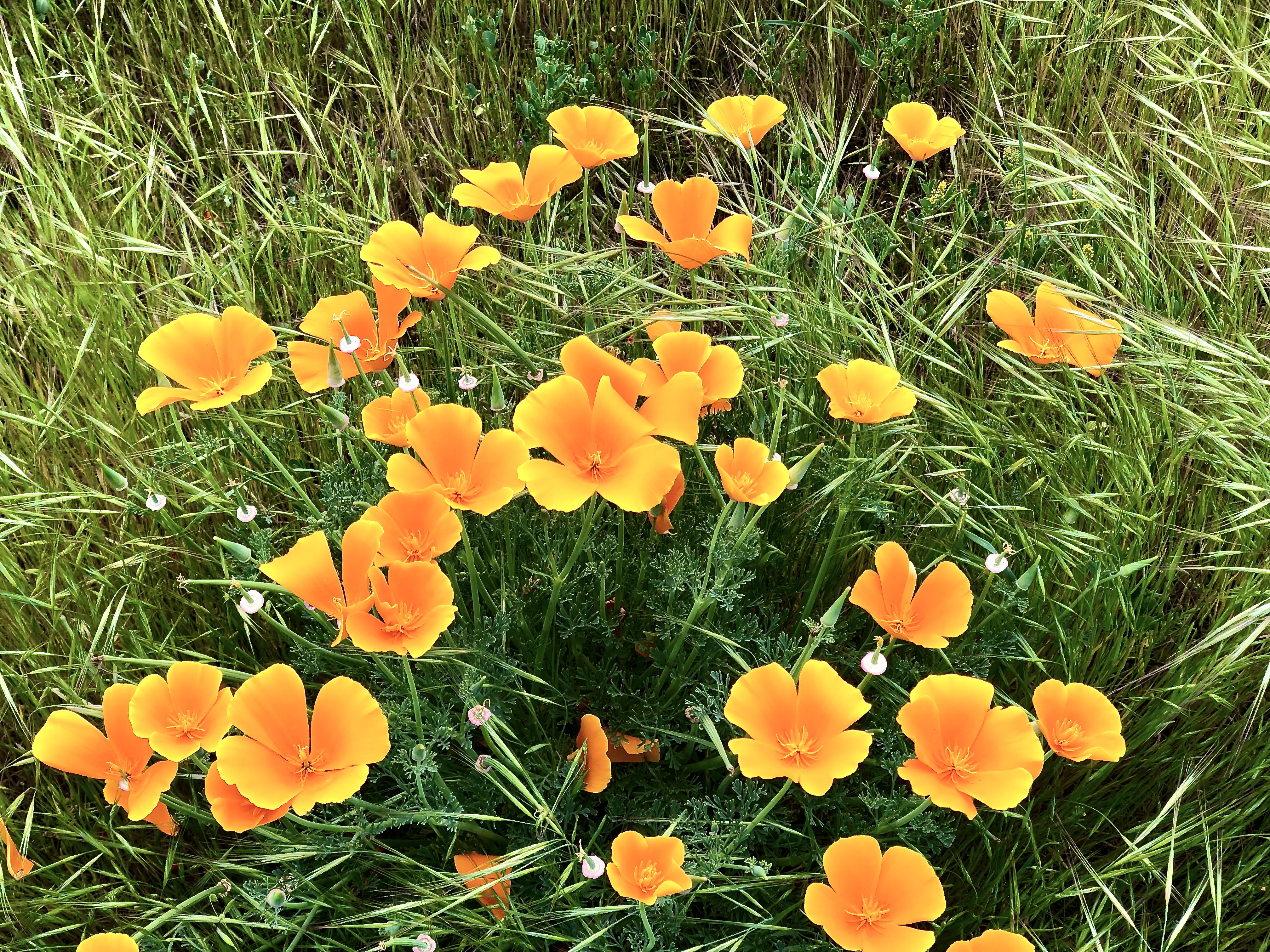 Pictured above is a small patch of California poppies.  Its native habitat includes California and extends to Oregon, Washington, Nevada, Arizona, New Mexico, Sonora and northwest Baja California. The Antelope Valley California Poppy Reserve is located in northern in Northern Los Angeles County.At the peak of the blooming season, orange flowers seem to cover all 1,745 acres  of the reserve.  Wikipedia

Usually a patch of lupines would be growing nearby. The two side by side make a lovely contrast.   However, we did not find them that year together.

When we were in the Burgundy region of France a few years ago, we found California poppies growing there also...

These lovely flowers became known as "California" poppies when the State deemed it its official state flower!

I love poppies... no matter the color... they are like a blanket of happiness!

HI Ron and Alexandra Seigel - I always loved seeing images of  California Poppys and even better when I came upon them in person.  Spring is coming! As is the case in California, spring comes early in Sedona and all of Arizona.  It makes for the longest season of the year.  I love it. Happy Friday!

Hello Alexandra and Ron - nature never ceases to provide sensory delights.  Up close and from a distance.

Michael Jacobs we agree, and we feel blessed living here and seeing so many sensory delights.  They never bore. A

Sheri Sperry - MCNE® I am wishing for more rainfall, and that would encourage more poppies, mustard and lupines along with other greenery.  I also love spring...A

Kat Palmiotti They are for me too.  I always love discovering poppies.  One of our neighbors grew some, and it was a delight to see them. A

Nina Hollander, Broker I love your analogy of a "blanket of happiness". That it is.  Happy Friday.  A

Roy Kelley Thank you for taking the time to comment.  We wish Dolores and you a wonderful weekend. A

Endre Barath, Jr. I do remember your photos and the posts.  I have a vague recollection of  having been to the Preserve ages ago.  Wishing Diane and you a wonderful weekend. A

Kathy Streib the two colors go together so well...Happy Friday.  A

Raymond Henson, eXp Realty I keep pulling off the road to see them and take a photo.  They pop up in the oddest of places.  A

Thomas J. Nelson, REALTOR ® e-Pro CRS RCS-D Vets they are fun to look at, and I don't pick them...no warning needed.  In my mind, they do not belong in a vase.  A

Oh it was a childhood "trauma" reflection😂, I wasn't warning you, just remembering almost getting in a lot of trouble as a kid as stooped over one day in a park to pick some for my mom and to my surprise was scolded, then educated by her instead.

Paul S. Henderson, REALTOR®, CRS Thursday was a great day, and today I expect the same. A

Ed Silva I enjoy seeing waves of poppies especially when we drive by the mountains. A

Tony Busanich and we wish you all the best also and a very delightful weekend. A

Bob "RealMan" Timm Wow that is beautiful.  This is the first time I have see that.  The only agriculture we see here is  are wine grapes, alfalfa, corn, tomatoes and other vegetable.  I would have to travel further for the crops you shared.  Happy Friday.  A

Wanda Kubat-Nerdin - Wanda Can! they are definitely smile worthy...Happy Friday, wishing you a wonderful weekend. A

California poppies and lupines are among my favorite of flowers in this state.  I will never forget a very large field of lupines in Yosemite's high country.  I have a picture I took of my mother in the midst of them, way back in 1967.

Thanks for sharing. I learned what the California State flower is. Maryland is the Black Eyed Susan.