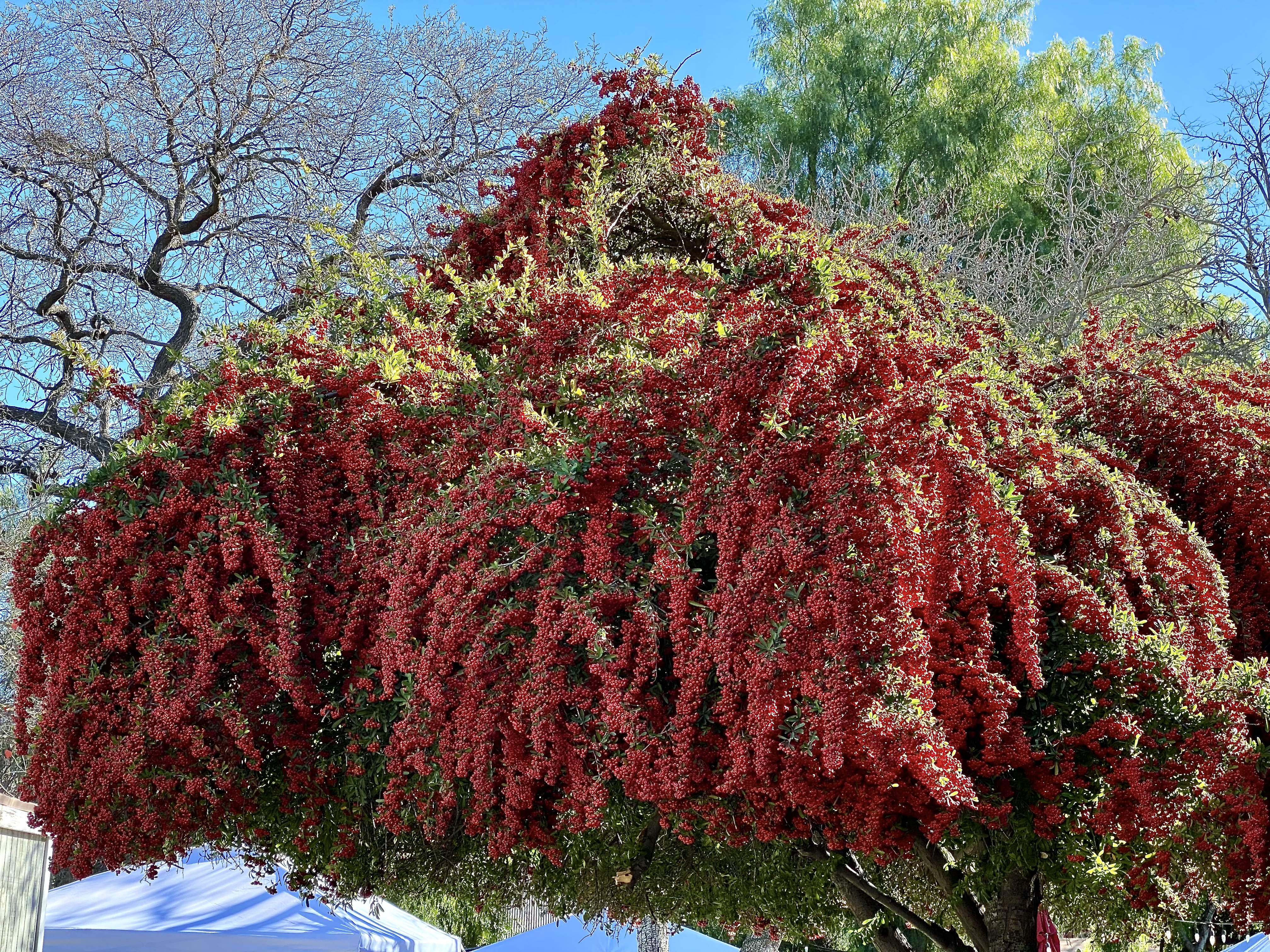 Pictured above is a magnificent pyracantha the blooms every year at this time.  You can see if take a trip to Los Olivos, a tiny town in the Santa Ynez Valley of Santa Barbara County. Los Olivos is an unincorporated community in the Santa Ynez Valley of Santa Barbara County, California, United States. Tourism is popular in this rural area which is an agricultural region with a emphasis on wine grapes. For statistical purposes, the United States Census Bureau has defined Los Olivos as a census-designated place. The population was 1,132 at the 2010 census. The ZIP Code is 93441, and the community is within the area code 805.Wikipedia

This beautify tree is by a small winery called Coquelicot, which is the French word for the red poppy. It adds shade to the store's picnic area.   On the opposite end of Grand Avenue is where Woeste's garden store is located.  Most of the retail involves tasting rooms of wines and olive oil.  There are small eateries and a new restaurant we have not tried.   It is well worth a visit if you are in the area.

great picture.  Thank you for sharing them with us. bill

Those blooms are amazing!  Does it only happen one time each year?  Is it just green the rest of the year?

Hi Ron and Alexandra Seigel - Very beautiful and so delightful to see these images of spring. Have a great weekend.

Hello Alexandra and Ron - while Los Olivos may be smaller in population than some other places, it is big on showcasing the many aspects of the community that make it a destination for those who are fortunate enough to enjoy it.

That is so cool. I would love to have one in my yard. Love tropical foliage.

Jeffrey DiMuria 321.223.6253 Waves Realty I love this plant, it is so bright, and we see it growing wild in the mountains also.  A

Michael Jacobs we need to go visit it again, and make a detour from our usual route. A

Sheri Sperry - MCNE® This lovely plant start in Nov-December.  I had it at our home in Los Angeles, and it always was part of the Christmas decorations.  A

Brian England it start in the winter months Nov-December, and is done around May.  A

Bill Salvatore - YVP Blog you are welcome, and we wish you a great weekend. A

Kat Palmiotti It is fun to visit and walk around the tiny place, and taste wine also.  A

Wayne Martin we will enjoy some wine, so many to choose from...Happy Friday and have a great weekend. A

Nina Hollander, Broker we make a special trip to visit it, and detour from our usual path.  A

Happy Friday, enjoy the weekend, and thank you for your comment. A

Hello A and Ron,  I can not wait for the home and garden show that starts next week in out area.

Magnificent is the perfect word for that plant A. I wonder if it's one that I can move in and out with the seasons here in ND Ron and Alexandra Seigel ?

HI Ron and Alexandra- this is one of those trees that you'd want to keep taking photos from all angles of it. You want to make sure you get just the right shot.

I have never seen a Pyracantha with so many berries on it.  It is really outdoing itself!

Alexandra, We have no blooms on any of our winter trees so it's nice to take a look at this blooming variety in Los Olivos!

That's really beautiful.  My friend has one she keeps cut very short and it grows up a trellis.   I love it when it is completely red with berries.