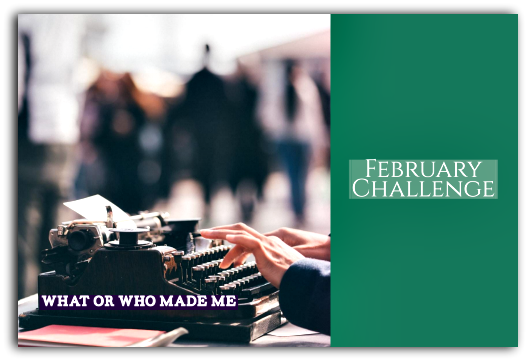 February Challenge…What or Who Made Me (Part 1)

It’s in my nature to try to understand why someone is the way they are…what went into influencing their behavior. I’ve pondered the same about myself.

The many cultures I grew up in had as big an impact on me as did any individual.

When we moved to Florida in 1987, I almost bit someone’s head off when they told me that I was now a Floridian.

Texas is not just a state you grow up in…it stays with you wherever you are.

Helping others whether or not you knew them…and treating everyone equally and with respect is what comes to mind when I think of how I was influenced. Texas made me tough and strong not because I faced adversity but because I saw others shrug off their misfortunes and move forward…no whining. That’s what you do.

My love of football?  In the Fall, it was all about High School football…big time!  And my uncle was a Rice alum so I loved going to Saturday games with my cousins and uncle.

I grew up hearing people address each other as “Miss Kathy” or “Mr. Larry” whether or not you were friends. When standing in line, it was nothing to strike up a conversation with the person standing next to you. When we moved to Florida, I had a rude awakening when people gave me a weird look for speaking to them without knowing them.

Texas proud isn’t just a logo on a billboard.

Even though I grew up in Houston, there was always a Southern influence, We were taught to be respectful of our elders and polite to people we met. If you came into our home, you were treated like a guest, and that always meant a meal! My grandmother who did the majority of the cooking would not have heard of a guest leaving without being fed!

I also learned how to politely tell someone off without seeming to do so. If you’ve ever been on the receiving end of…Bless your little heart…it may NOT have been the blessing you thought you were getting.

I am Chinese as were my parents and grandparents. But because both parents were born here and my grandparents came over when they were young, the influence was not as strong as it was with some of my friends.

I did learn a deep respect for my “elders.” When we entered a home, we had to go immediately to the oldest adult and say hello… the same thing when we left. We had an abundance of “aunts” and “uncles” because we were taught to call my family’s friends “Aunt” or “Uncle.” To this day, I still address my mother’s friend as Aunt and she’s in her 90s. We had a small family store and my parents worked 6 days a week, so I began helping out at an early age with household chores. Saturday chores had to be done before going out to play.

My father and uncle served in World War II so our family loved this country. They did not suffer anyone who would speak against it.

If as I believe to be true, we are influenced by our environment, then this is why I am the mish-mash that I am. And I wouldn’t have it any other way.

This has been in an entry in the “February 2022 Challenge: What’s Your Story?” hosted by Carol Williams and Anna Banana Kruchten CRS, Phoenix Broker

There were similarities in your Chinese "aunts" and "uncles" that were your parents' friends. I, too, had many aunts and uncles back in my homeland, Thailand. Now that I am in this country, I have many Thai "sisters" and "brothers." I also have two "younger sisters" in Houston, and we are not blood-related.

When we meet old friends or family members in Thailand, we don't say, "how are you? Instead, we ask, "have you eaten yet?" God forbid, if you're in a hurry, you have to say "yes, I have eaten" otherwise, you would be forced (nicely) to come in, sit down, and eat!! If not, it's "disrespect."

Kathy I need to remember the "Bless Your Heart" response.  There is a number of people I may be using it on.   😆

While you may have had parents born in this country, those are old world values, regardless of where that old world may have been

Kathy, sounds like you were raised to be a responsible and respectable adult, lots of great customs.   You can't take the Texan out when you move to FL?  LOL

I really enjoyed reading your post and hearing about the many influences that made you the wonderful person you are.

Nina Hollander, Broker I think we also share growing up in a time when values were hammered into us, which is good. There is much we have in common.

Wayne Martin you've got that right!!!  I remember the first time we flew back into Texas...I realized how much I missed the accent!!!

Kat Palmiotti it's interesting how so many of us have been influenced by our environment...more than we'd like to think.

Bill Salvatore - YVP Blog you bet I am!!!

Hi Grant Schneider ,many had parents who immigrated from another country so it's always interesting to see how the cultures come together.

Bob "RealMan" Timm it's wonderful being older because what people see is who you are. When we're younger, we're still trying to figure it out.

Brian England I feel the same way, friend. And I know how much your family means to you!!! It's a good thing.

Ron and Alexandra Seigel Thank you!  I still remember our meeting!!!

Michael Jacobs exactly!  Once we appreciate that we're all different we begin to understand that we also have much in common.

Roy Kelley you are very welcome. Hope that you and Chef Dolores are doing well.

Kathleen Daniels, Probate & Trust Specialist use that line in good health!!!!! And I'd forgotten about "speak when spoken to."

Buzz Mackintosh oh yes, the Cowboys-Redskins !!!  I actually enjoy watching the Redskins. Remember John Riggins?  Larry went to KU with him and worked a summer job together.

Oh my gosh Beth Atalay that is too funny!!!!! Kathy Streib  I met Riggo at our local home show a couple years ago !

Aura Alex that is too funny about making sure you say you've eaten!!! If you visit them in Houston, let me know so we can meet for coffee.

George Souto Careful if they're from the south! LOL  The trick is to say it with a smile and a certain look in your eyes.

OK, we have a date in Houston! I'll try to remember not to ask you if you have eaten! It's a long way from Seattle to Houston!😄

Ed Silva you're right. And I like many of the old world values.

Joan CoxI'm sure the person thought I was nuts!

Hi Kathy,
You are a wonderful mish-mash and I'm glad we got to spend time together during my road trip last Fall.  😊

You have the perfect mish-mash of growing up to be who you are and we all love you to pieces Kathy!  Love all the photos - you kids were all so adorable!  I've seen the one with you on the toy horse and it's still warms my heart!  I can relate with being respectful and polite to all the adults.  We called them Mr ___ Mrs --- if they weren't in the family.  It wasn't even considered (in my mind) not be be polite. Isn't it great that many of us carry that gift forward to this day! Fun entry Kathy!

That's a heartwarming story, Kathy.  My grandson grew up in Texas, and graduated from Rice University.  I can attest to what you say about being from that state sticking with you!

Sharing a bit of the AHA that formed you means more will be given as you spend it.