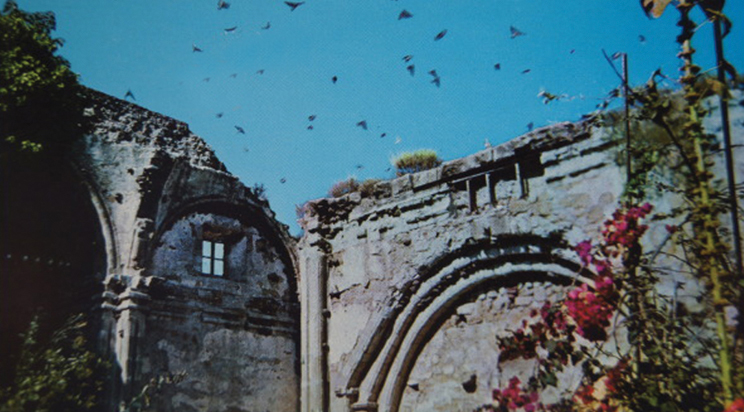 The cliff swallows are noted for their distinctive mud nests they build under the Mission's eaves and archways. The flocks traditionally leave in the fall on October 23, the Feast of Saint John. Capistrano from spring through fall. Since then, the swallows have been considered the "signature icon" and symbol of Mission San Juan Capistrano.

Mission bell ringer Acú used to regale visitors with a romantic tale that the swallows (las golondrinas) flew over the Atlantic Ocean to Jerusalem each winter, carrying small twigs on which they could rest atop the water along the way back to Mission San Juan Capistrano.

Composer Leon René was so inspired by the annual swallows return that he penned the song "When the Swallows Come Back to Capistrano" in tribute back in 1939. The song has been recorded by such musicians as Guy Lombardo, Glenn Miller and even Christian crooner Pat Boone.

Prior to 2020, the Fiesta de las Golondrinas was held annually in the City of San Juan Capistrano. Presented by the San Juan Capistrano Fiesta Association, the Fiesta de las Golondrinas was a week-long celebration of this auspicious event culminating in the Swallows Day Parade and Mercado (street fair). No parade nor mercado occurred in either 2020, nor 2021. In 2022, the parade finally returned and photos can be viewed at https://www.facebook.com/SwallowsDayParade/

Learn about past and future San Juan Capistrano parade and events at www.swallowsparade.com. Past events include Ringing of the historic bells, Live mariachi music, Community presentations, Flamenco dance performances and History of St. Joseph’s Day and Swallows Legend. When the swallows come back to Capistrano

That's the day you promised to come back to me

When you whispered, "Farewell," in Capistrano
'twas the day the swallows flew out to sea

— excerpt from "When the Swallows Come Back to Capistrano" by Leon René.

Sadly, even prior to the plague years, decreasingly smaller flocks returned to the Mission in the 1990s and 2000s. The reduction in swallow flocks is connected to increased development in the area.

Mission San Juan Capistrano was founded on November 1, 1776. It is the seventh of the nine missions established by Saint "Father" Serra. A total of twenty-one California missions were built.

Thanks for reading "Will San Juan Capistrano's Swallows Return Mar. 19?"

I had no idea about the date the swallows return to San Juan Capistrano.  I learned something new.  A

Yes, it's one of those mysteries of nature, isn't it?