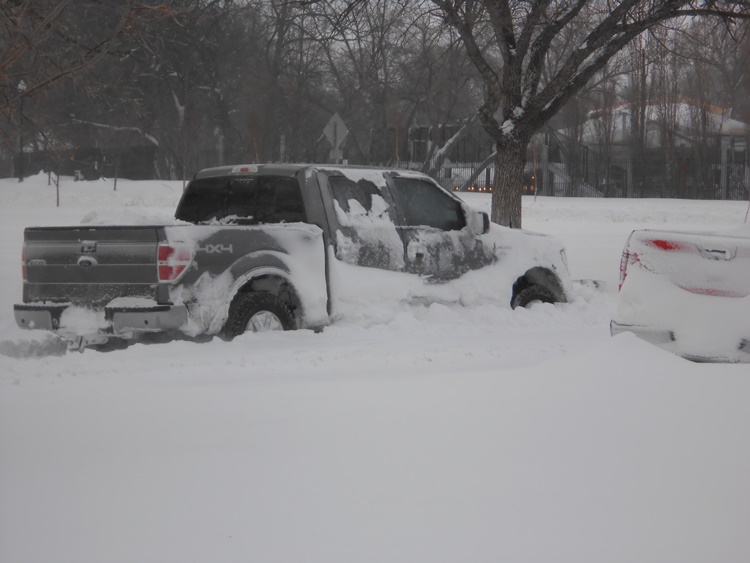 It is over and it is a record!

The biggest April blizzard in Minot's history is over and it officially left us with 36" of new snow on the ground.

Timmothy and I did a pretty good job of keeping up and tomorrow morning if the street department has done their part overnight I will be headed back to the office and the job of notarizing loan documents so folks can be one step closer to being in the new homes of their dreams.

One of the two cars that was stuck and abandon in the street in front of our house has been removed by the owner and I believe the street department can work around the other if they have to.

There is still another snow in the forecast (Easter Sunday) but after dealing with this one it should be a piece of cake. That being said I let Timmothy do most of the work because as many of you know I have had some very serious back issues over the last several months HOWEVER I had to be out there with a shovel to give my son moral support. Hopefully traction is not in my near future (pain pills certainly are and will be administered before bedtime tonight).

Thanks Kat Palmiotti . For years I have longed for a garden tractor with a snow thrower attachment but they take up a lot of storage space and sometimes we have gone years without the need of a snow thrower.

It was nearly an overwhelming challenge when we stood at the end of the driveway and watched the snow plow pile a 5' high ridge right at the end of our driveway that also buried Timmoty's car and my trailer. Not only was it 5' high it was about 5' wide and packed hard as well. All three of us (Timmothy, Carol, and I) got up at 5AM this morning and made a path just wide enough for my car to get out. We finished at 7PM. Timmothy worked longer and got his car out along with the help of Carol and our neighbor pushing from behind.

Oh my goodness, Bob... I can't believe you actually have more snow in the forecast! You and your family are amazing... I think I'd have just stayed in my house and waited for things to melt! :)

Staying in the house was/is a very tempting idea Nina Hollander, Broker but I had an eye appointment at 8:30 and a signing at 9:00. It took the three of us to dig through the 4' high by 4' wide (packed hard) ridge the plows left at the end of the driveway. We started at 5:00 and finished at 7:00 so I could still get to the office by 8:00.

Oh my gosh Bob that is a lot of snow. Don't pick up that shovel again, ok?  Taking care of your health is good plan of action.  I'm sure Timothy will be happy (well maybe not happy) but willing to take it on to prevent things from getting worse for you.  He's a good young man.

God really blessed me with Timmothy as a son Anna Banana Kruchten CRS, Phoenix Broker . Once he has been shown how things work (a couple of times) he has it down BUT I still want to be there as encouragement.

Totally agree Bob.  But no more shoveling for you!!!!

Sorry to hear about your back Bob - been there, done that!   Hope your snow season ends very soon!  That's some crazy snow.  Good that you have your son to help you!

I am truly blessed to have my son at home while he goes to college Jan Green . Even though he is here to help I do hope the season is over too but it sounds like we may get 4 more inches on Easter Sunday.

Enjoy the respite, Bob.  And, I hope you enjoy a delightful holiday weekend.

Thanks, Bob, your your spring blizzard update.

Have a lovely Easter with your family and friends.

Good morning Bob - I guess there are no Easter lilies blooming outside your home yet.  None here either.

Oh Wow! I hope you love it there Tim!

Wow Bob, glad we missed this one the Denver area, but we can still get one so snow blower is still full of gas.

I guess the respite will be short Myrl Jeffcoat as they are now predicting another 6" tomorrow, Easter Sunday.

If the weather guessers are correct Roy Kelley it may only be with family being another 6" is on order for us.

That is for sure Grant Schneider . Anyhing that started to grow has had to go back to sleep for now.

There are many aspects of living up North that I do love Carla Freund but the long winters never has been a favorite of mine.

I imagine summers are great there.

Funny you should mention the gas and the snow blower Will Hamm as I just asked Timmothy this morning how we are doing. We have nearly exhausted the 5 gallons I had set aside for it.

Glad to see, you have a real tool. I like to shovel every 4+ inches, so that one would have kept me going for the duration.

This one gave everyone a work out Dorte Engel . Carol had not shoveled for 25 years.  She only shoveled for a half hour but has been sore for 2 or 3 days now.