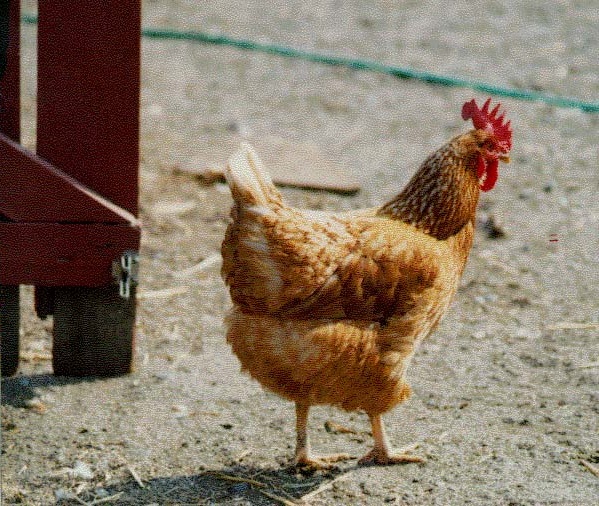 To get to the Chicken.

Was it subliminal, good advertising, or a coincidence?

Maybe it was just blind luck.

As I was preparing for the day, fresh out of bed and not yet in the shower, I heard an interesting quote attributed to Colonial Harlan David Sanders and then I heard another one as we were leaving church around 11:00. Both were by radio show hosts on separate radio programs.

Whether the quotes influenced me, or the coupon I had from one of those coupon books I purchased, the fact is that I crossed the road to eat the chicken.

At age 65, by almost every measure, Harlan Sanders was a failure. Tire salesman, railroad fireman, farm hand, insurance salesman, steamboat pilot, and country lawyer, he failed at them all.

Then he took $105 from his first social security check and began visiting potential franchisers, pitching them on his secret recipe. He slept in his car and shaved in service station bathrooms. He was turned down more than 1000 times. But this approach finally proved successful and the Kentucky Fried Chicken corporation grew to more than 300 franchisees. Less than ten years after starting his new company, Colonel Sanders sold it for $2 million (roughly $15 million today).

The two quotes I heard today were:

Don't be against things so much as for things.

Hard work beats all the tonics and vitamins in the world. Good morning, Bob... both are quotes "to live your life by." No doubt that Colonel Sanders is one of America's best success stories.

Turned down 1000 times and he kept on going. Good for him!

Good morning, Bob.
The words belief and persistence come to mind.  If only we all could believe in ourselves as strongly as Colonel Sanders believed in himself and his secret recipe.

Good morning Bob. Don't be against things as much as for things! Reminds me of "the mind is like a parachute. It only works when open." Never give up! Enjoy your day.

Most "instant successes" were far from it.

It's so interesting to read their biographies and how hard work with innovation led to crossing the road to success.

I haven't had that chicken in a very long time but I remember it always being tasty!

Interesting story Bob.  I didn't know the history behind Mr Sanders. Pretty amazing really to finally become a 'success' at age 65.  Wish I could say I actually like that chicken but I don't like fried foods.  But our family does it's part as Gary likes to pick up stuff from there on occasion.

Endre Barath, Jr. you certainly would have a "leg up" on the Colonial as you have already been successful and would not have to promote your sauce while living in your car.

I prefer the original as well Myrl Jeffcoat but on this trip I used a coupon for a chicken strips meal. BTW it was excellent and I was surprised that the fries were even good reheated for lunch today. 😊

He really is an inspiration Nina Hollander, Broker giving hope to many that "it is never to late" to step out and fulfill your dreams.

It's hard to believe that there were 1,000 places he could go to sell his recipe to Kat Palmiotti but that is what the story says.

I think you really hit the key to his success Carol Williams . If more people believed in themselves we would have a lot less people on welfare.

I like the quote you found even better Wayne Martin however there is always that counterpoint that a wide open mind is one full of holes. 😊

faye schubert I am 67 and I am ready to become an over night success. I'm still looking for that key. 😊

Being there is a shop close to our church we manage to stop by on a quarterly basis in general Brian England . It's kind of on our higher end of fast food so it also depends on if we have a coupon or not.

Anna Banana Kruchten CRS, Phoenix Broker believe it or not Kentucky "Fried" chicken is not fried... it's cooked in a pressure cooker.

It always tasted oily and greasy to me.  I might be the only one who doesn't care for it!!

Ther as a lot of history for the colonel and not all of it was upright. In the end, he was very fortunate

Great quotes and I like the title of your post as well! I've heard his story before. I had forgotten how old he was. Sometimes I think about those people who were successful at an older age. It reminds me that I still have time to make a difference.

Considering all the things he has done, especially selling used cars, I'm sure it wouldn't be to hard to find people who were unhappy with his past dealings(s) with him Ed Silva . While I would like to believe my Real Estate record was that everyone I came in contact with thought I was a Saint I know that through other eyes I may be thought of as a devil.

That is how I thought as well Carla Freund (there is still time for me to be a success). Of course I am thinking business here as my number one goal was to not fail as a father to my children and God graciously granted that prayer to me.

I agree. You can't go back and change your kids childhood. Going back to work was probably one of the biggest guilts I had with raising my kids. My daughter hated it. Today, she gets it and all is well. I think she realizes how she benefited from seeing me work.