Love trivia? Learn about 12 interesting news items from May 10th.

1869 – The First Transcontinental Railroad, linking the eastern and western United States, is completed at Promontory Summit, Utah with the golden spike.

1872 – Victoria Woodhull becomes the first woman nominated for President of the United States. 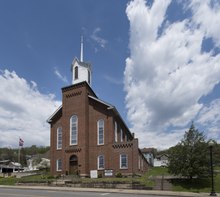 1908 – Mother's Day is observed for the first time in the United States at St. Andrews Methodist Episcopal Church (above), in Grafton, West Virginia.

1916 – Sailing in the lifeboat James Caird, Ernest Shackleton arrives at South Georgia after a journey of 800 nautical miles from Elephant Island.

1924 – J. Edgar Hoover is appointed first Director of the United States' Federal Bureau of Investigation (FBI), and remains so until his death in 1972.

1941 – World War II: Rudolf Hess parachutes into Scotland to try to negotiate a peace deal between the United Kingdom and Nazi Germany.

1962 – Marvel Comics publishes the first issue of The Incredible Hulk.

1967 – The Northrop M2-F2 crashes on landing, becoming the inspiration for the novel Cyborg and TV series The Six Million Dollar Man.

2002 – FBI agent Robert Hanssen is sentenced to life imprisonment without the possibility of parole for selling United States secrets to Russia for $1.4 million in cash and diamonds.

2013 – One World Trade Center becomes the tallest building in the Western Hemisphere.

Those are a lot of odd and interesting facts.  I knew Hoover was head of the FBI for a long time but never would have guessed all those years. I wonder what happened to Victoria Woodhull?

Believe it or not MichelleCherie Carr Crowe .Just Call. 408-252-8900 I had that first Hulk issue. Regretfully my mother could not stand "clutter" and she threw it away.

Thank you for reading and commenting. Bob, I'm sorry for your loss of that Hulk comic!