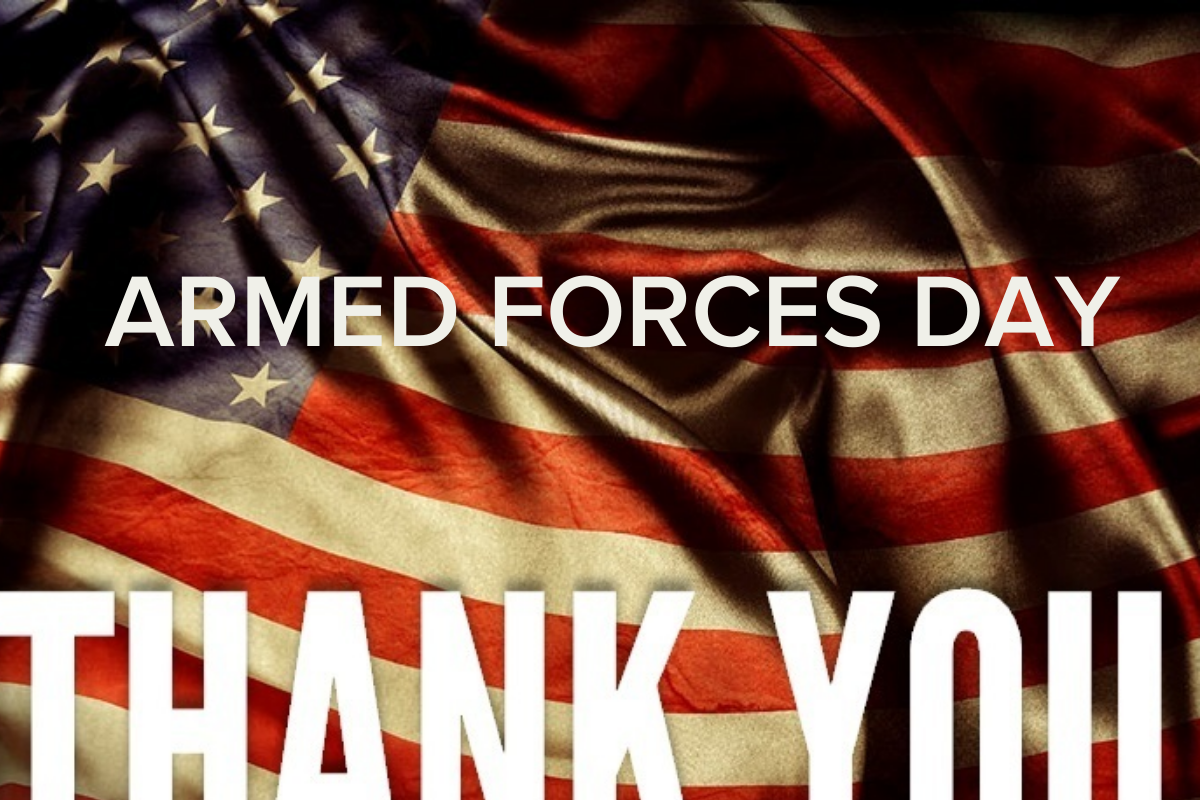 The third Saturday of each May is Armed Forces Day.  Although Armed Forces Day is not an official federal holiday, this day honors everyone currently serving in all six of the United States military branches -- Air Force, Army, Coast Guard, Marines, Navy, U.S. Space Force.

"History has taught us over and over again that freedom is not free. When push comes to shove, the ultimate protectors of freedom and liberty are the brave men and women of our Armed Forces. Throughout our history, they've answered the call in bravery and sacrifice."

President John F. Kennedy established Armed Forces Day as an official holiday in 1962. However, it was President Harry S. Truman, who began the effort to set aside a day to recognize the service of our armed forces. In 1949, Armed Forces Day was established to replace individual Army, Navy, Marine Corps, U.S. Coast Guard and Air Force Days. The first official Armed Forces Day took place on May 20, 1950, and was themed “Teamed for Defense.”

"The freedoms and prosperity we enjoy in America are thanks to the brave men and women who have served in our Armed Forces."

Armed Forces Day is a holiday that falls "under the radar," compared with Memorial Day and Veteran's Day. Nevertheless, take this opportunity to observe Armed Forces Day and Week by thanking a member of our brave military for their patriotism, their heroism, their service, and their sacrifice. There's truth to the saying that "heroes don't wear capes, they wear dog tags."

Let's remember that our armed forces members are volunteers. As General James H Doolittle said: "There is nothing stronger than the heart of a volunteer."

By the way, did you know that the flag patch on military uniforms has the stars on the right and the stripes on the left to give the effect that the flag is blowing in the breeze?

"Never in the history of the world has any soldier sacrificed more for the freedom and liberty of total strangers than the American soldier."

"The cost of freedom is always high, but Americans have always paid it. And one path we shall never choose and that is the path of surrender or submission."

"Freedom does not come without a price. We may sometimes take for granted the many liberties we enjoy in America, but they have all been earned through the ultimate sacrifice paid by so many of the members of our armed forces." "No duty is more urgent than that of returning thanks."

When You See a Soldier

When you see a soldier
Be sure to shake his or her hand,
And let that soldier know you're grateful
For the protection the military affords our land.

But most of all, express your thanks
For every soldier's personal sacrifice.
In order to serve our country,
They risked their entire lives.

Hello Nina Hollander, Broker thank you for the reminder. The Armed Forces Day is a very important day we all need to celebrate.

No Nina, I did not know anything about the flag patch representing the flag blowing in the breeze...very interesting!

John Pusa hi John... it's a shame that this particular day does fly under the radar compared with other days like Memorial and Veterans Days.

Hello Nina  and thanks for sharing this great information with us here in he rain.  Make it a great Saturday!

Will Hamm thanks, Will, for stopping by today. Trust you are having a lovely weekend despite the snow.

I admire people who recognize the importance and sentiment of the brave soldiers and go out of their way to share with the rest of us. Thank YOU, Nina. My son is a Marine Veteran.  I have always thought that if you put a uniform on and you put yourself in harm's way to protect us, you are a hero.  This is self-sacrifice for your fellow American.  There is no greater selflessness.

Thanks for reminding us.

Every time I see a person in uniform whether in public safety or our armed forces I tell them thank you for your service.

Hi Nina- it's unfortunate that some people take the military for granted. I appreciate everyone who serves in the military.

Nina I should be aware of Armed Forces Day, but I do not recall hearing about it before.  However, I am in full support of it now that I am aware of it.

George Souto hi George... amazing to me how many people are unaware of Armed Forces Day... maybe it's because it's not a federal holiday.

Aura Alex hi Aura... our military and first responders don't get half enough attention and respect that they should.

Sheri Sperry - MCNE® hi Sheri... there is no greater selflessness than to volunteer to serve in one of our armed forces branches. I know you are very proud of your son, as you should be. And I thank him for his service.

Kathy Streib hi Kathy... once we became an all volunteer military more people than not had little experience with the military, unlike when we had a draft. The service and sacrifice of many has become somewhat invisible to most Americans.

Nina Hollander, Broker  so many people forget the true meaning of this day. You however have told the story so beautifully

I hope you are having an outstanding weekend.

Hannah Williams thank you, Hannah... as I said in my post, this seems to be day that flies under the radar and it really shouldn't.

Good morning, Roy... my weekend is busy with all sorts of projects around the house and in between trying to negotiate an offer in a multiple offer situation.

Thank you for sharing this Nina! We've had many family members serve. It's important to set time aside to appreciate those fighting for or who have fought for our freedom!

Carla Freund good morning, Carla... personally, I think we don't do enough to recognize and appreciate our military and first responders.

I agree with that.