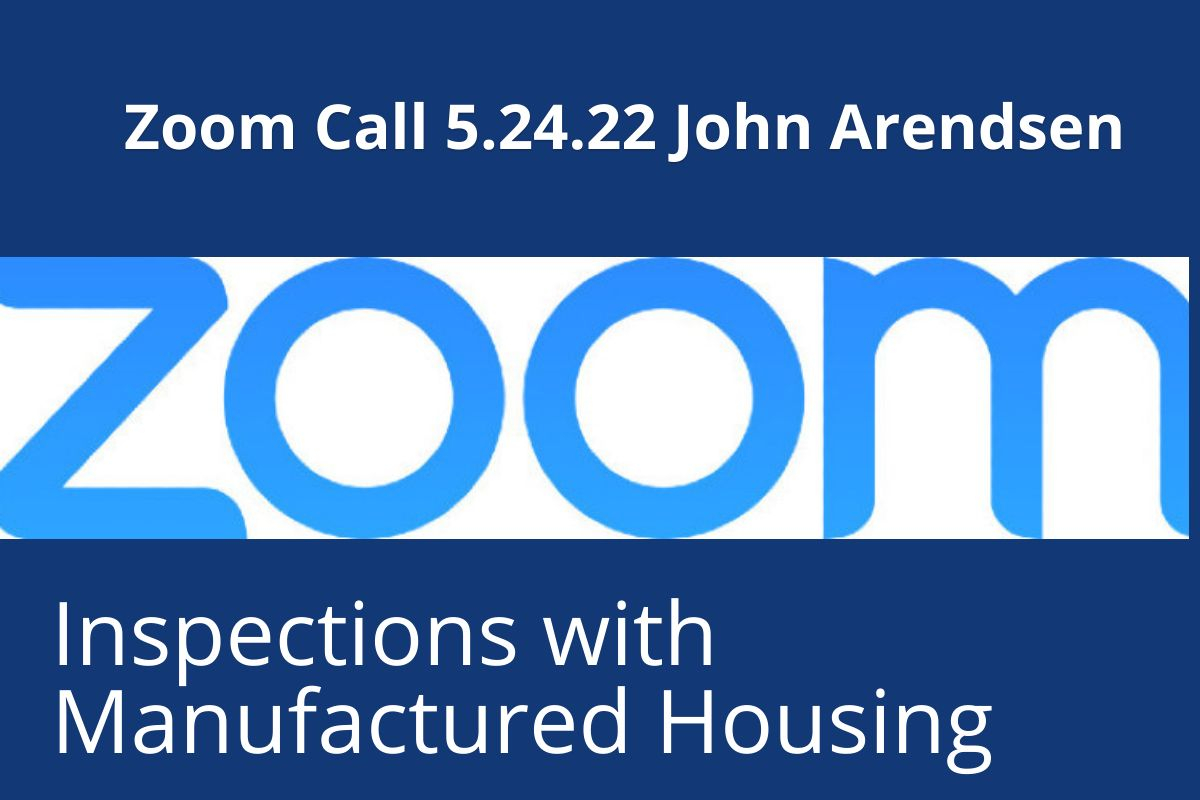 The Zoom call this past week was on HUD manufactured homes, formerly referred to as mobile homes. Factory built homes, offer economies as they are smaller and as they are built in standard models offer economies as well.  With the modern conveniences installed they can be an ideal residence for downsizing people looking for less maintenance.

The presentation was based on a community that John had inspected as part of a class action lawsuit against a mobile home operator that resulted in at least 30 residences having to be declared uninhabitable and in at least 1 instance the lack of maintenance resulted in a death due to mold in the home. Lipstick on a Pig

John called his presentation a typical case of lipstick on a pig. The operators of the park had been ignoring the ongoing maintenance and as a result, the homes started to decay at an accelerated rate.

As with any type of residence, curb appeal and exterior cosmetics can appear to be fine. It is only after a contract has been initiated and an inspection is done does the home show it's true issues, and hopefully there are none or minimal at the worse.

The jargon for inspectors when approaching a job is referred to as Shoes, Skins and Hats.  Shoes would be the foundation; skins are the exterior walls and Hats would be roofs. A primary source for water penetration would be from roofs. Wind and rain and in some areas, ice and snow can take their tolls on roofing materials and cause edges to lift and decay. In time, water gets under the shingles and starts to destroy the roofing sheathing which will also allow water to penetrated to the interior walls of the house.

Vent roof penetrations are also a source of penetration and John recommended that at least every 2 years a thorough inspection should be done of the roof and areas where vents exit. Trees overhanging roofs are also a concern. With wind blowing, the branches will rake the roofing materials and weaken them allowing water to get into the house.

In this instance, it as the overhanging tree that allowed for the water penetration which eventually turned into black mold and killed the owner. The water also created the discoloration on the side of the home and allowed penetration through the window. Gutters also need to be cleaned regularly so as to keep debris and weight out. In time, the water will back up because of a filled gutter and decay the fascia board of the residence.

This will lead to very expensive repairs both outside and inside of the house.

Gutter guards will help but the biggest concern there would be the vendors trying to take advantage of an unsuspecting homeowner. With a gutter filled with debris and water, The wood support of the homes becomes weakened and this is an expensive repair, which can also create issues within the walls

The exterior side walls of a manufactured home also need to be periodically inspected.  As manufactured homes are typically set on support piers which allow for the mechanicals to be accessed from an entry chase, the exterior skirting is susceptible to damage especially where the upper parts are joined. A trim board or skirting is normally placed around the joined area and sealed with a caulk. This will fail over time, so an inspection of the trim area is important. If it looks damaged or worn, the old caulk needs to be scrapped away and a new layer of fresh material applied. This keeps the water our and does not allow for the wood below to become rotted.

If this is ignored, then the water will not only rot the exterior wood, but also the box joist that supports the house will become damaged and then the entire floor structure of the home is compromised.

The shoes would be the support structure of the home as well as the pad on which it rests. The underside of a manufactured home is accessible through entry ports. If a door can be opened and there is vegetation present. then water is getting under the home.

This creates a hazard as the support columns can move which will affect the structure and make doors and windows difficult to open or close. The excessive moisture also is unhealthy and could lead to mold.

Improper drainage is typically the cause, and this starts from the outside areas of the home. As can be seen on the photo, insufficient spacing around the home, and on this instance too close to a retaining wall allows water to run directly to the home. This could be prevented by first allowing more space and also providing proper drainage around the outside of the home.

Drainage between the homes is also necessary and should be completed to allow water to drain away from the homes and into exterior storm drains.

When selecting an inspector for a manufactured home, it is important to find one that understands the construction difference between a site built and factory built home.

Mr. Arendsen spoke of the California Real Estate Inspectors Association, CRIA, as a source there for a qualified manufactured home inspector. In other states a search of a comparable association would be a place to start.

A lot of questions were asked and answered and at the end of the session many of the attendees had a much better understanding of manufactured homes and how to be better informed when helping a buyer find and purchase one.

Groups:
Be The Best In Your Field
Dedicated Bloggers
Bananatude
Old Farts Club

Hi Ed - I can see that I missed a good presentation on Tuesday.  Thanks for the recap.

This is such a great summary and I always learn a lot when I visit John DL Arendsen in person.

Thank you very much, Ed, for your excellent Zoom session report.

Ed, thanks for sharing the Zoom meeting, and sounds like lots of valuable information we can all use.

Very interesting information, Ed... manufactured homes are almost impossible to sell here in Charlotte so I rarely come across them.

Great summary Ed Silva! You did an amazing recap of my presentation and I really appreciated your attention to detail. As always I thoroughly enjoy having the opportunity to interact with all the wonderful folks at AR. I've learned a lot and have met a lot of terrific folks since I joined in '08. Thank you everyone and I look forward to many more years of fun with you folks. Have a great year!

John DL Arendsen gave an excellent presentation last Tuesday and I learned a lot about a niche that is not my market.  Hat, skins and shoes so reminds me of stick built homes and all the issues we've run into this past 35 years.  I see things from a different perspective now with mobile/manufactured homes as there appears to be more room for things to fall apart (all things being equal). Great recap as always Ed!  You don't miss a beat on even the tiniest of details!

Ed I had to leave half way through the meeting for a doctor's appointment, so thanks for filling me in on the rest.

Hi Ed- John DL Arendsen 's presentation was excellent and I continue to learn from him. His title was (lipstick on a pig)  perfect for sfome of the issues he showed us!

Thanks for a great recape, Ed, especially since I missed all that John shared. He clearly knows his stuff.

Sorry I had to sign off. Not sure what happened with my video and then I lost reception totally!

Hi Ed Silva
John DL Arendsen always gives a great presentation. The thing about this presentation is much of what he discussed is applicable to ALL homes, not just manufactured ones.  Thanks for the recap.

You're spot on about that Ed Silva. As constructions defect expert witness I've probably done as  many site built homes as I have MH's.

Hi Ed,  I'm so sorry to have missed this.  It sounds so interesting.  We see our fair share of mold in south Florida, but I have never heard of anyone dying of it.  Thank you for the recap.

I'm certain that all who were able to attend this Zoom session with John, benefitted from it.

Thank you for another wonderful overview! I appreciate that you take the time to do this, and I also appreciated John's manufactured housing overview. Pictures always help!

Sorry to have missed this Zoom!  Darn it!  Thank you for taking notes and sharing the info presented.  Would have really liked to watched it.  Next time!