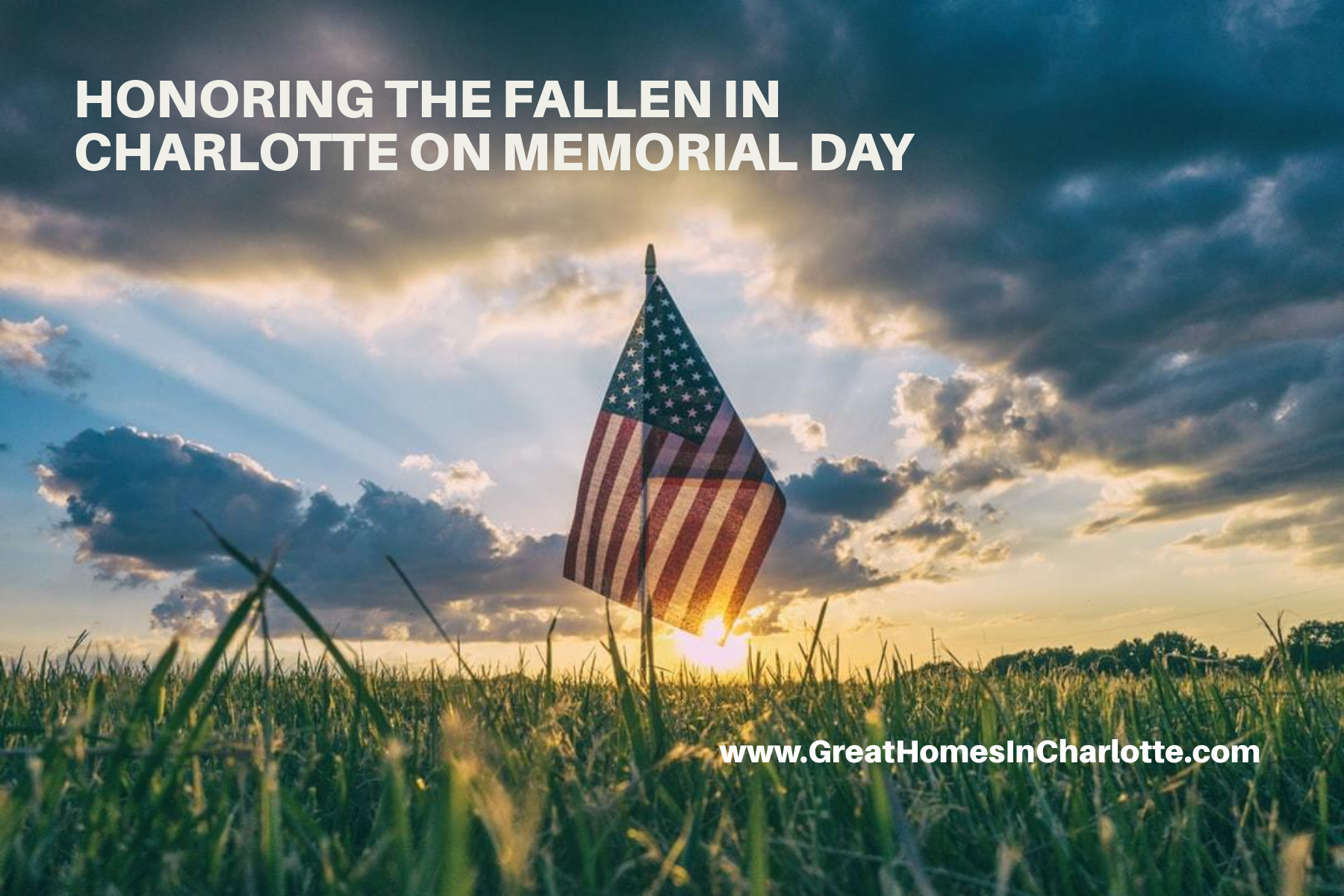 "And they who for their country die shall fill an honored grave, for glory lights the soldier's tomb, and beauty weeps the brave."

So many people just think of the upcoming Memorial Day weekend as the official start of the summer season... but let's not forget the real meaning and reason behind Memorial Day. Memorial Day exists for us to honor and celebrate the men and women who died while serving in the U. S. military. More information about the history of Memorial Day, click here.

DID YOU KNOW that each year on Memorial Day a national moment of remembrance takes place at 3:00 p.m. local time?

“America without her soldiers would be like God without His angels.”

In the Charlotte region, we have a number of venues to honor our fallen soldiers on Memorial Day, May 30, 2022. So why not begin your Memorial Day by honoring those who sacrificed their lives so that we can enjoy our upcoming summer.

"There is nothing nobler than risking your life for your country."

Eric Bouler good morning, Eric... thanks for popping by... are you decorating early for Christmas? :)))

Brian England good morning, Brian... I doubt you'd find anyone who would say war is a good thing... but sadly, they do need to be fought.  Look at Ukraine defending itself for the past three months against Russian aggression.

Grant Schneider good morning, Grant... I'm with you on that... it's why I wrote this post. I was hoping to get the message across that there's more to Memorial Day than bbq's and swimming.

Joan Cox good morning, Joan... I was happy to see in-person events back this year... but actually expected to have seen more.

Hi Nina- what an absolutely beautiful post. I share the same memories that you and Wayne Martin mentioned. We'll head to the Fallen Warrior Memorial near us on Monday.  I know that Larry had fellow pilots that were lost and we both had classmates as well. they never got to live the life that we have.

Nina good information to put out there.  I will be marching in our local Memorial Day parade. ☺️

Kathy Streib thanks, Kathy... Memorial Day should have some somber moments in it and it always grates on me when people say Happy Memorial Day.

George Souto hi George... how great that you still have a Memorial Day Parade! They seem to have disappeared in so many places. I used to march in mine as a Girl Scout... of course that was more than 60 years ago.

Thank you for sharing this tribute. I believe that ... Claudia Pemberton said it best 🙂.

Nina you and I are on the same page, there is an AR member who I used to follow he seldom interacted... at least with me... I just commented on his post and removed him from my circles... totally missed the point of Memorial Day ... you know the Flag with Happy Memorial Day.....grrrrrrrrrrr....

Paul S. Henderson, REALTOR®, CRS good morning, Paul... isn't that quote by Claudia Pemberton just wonderful! When I first saw it, I had chills go down my back.

Endre Barath, Jr. good morning, Endre... I have no issue with people enjoying their Memorial Day weekend... I just have an issue with people who don't understand the meaning behind Memorial Day and can't take a bit of time to honor those who died so we can enjoy the weekend. When I wrote this post, I knew you'd get it and I'd be hearing from you.

Good morning Nina.  With the BBQ's and party's, all good stuff, the meaning of this Holiday is often forgotten in the shuffle.  Hopefully we will never forget completely. Mark

Hi Nina,
I always love and appreciate your special day posts and most especially those honoring our military.  I love how you wrapped it up with the Benjamin Harrison quote!

Mark Don McInnes, Sandpoint-Idaho hi Mark... I just received my "gazillionth" email message for something or other wishing me a Happy Memorial Day. It's like no on understands how inappropriate saying that is.

Carol Williams thanks, Carol. I only just now came across that Benjamin Harrison quote... and just loved it.

A well rounded weekend activity list for those to honor the fallen. Thanks for the post Nina!

Wanda Kubat-Nerdin - Wanda Can! hi Wanda... I have no issue with people enjoying the weekend... I'd just like more people to focus on why we have Memorial Day and take a little bit of time to honor those who have sacrificed their lives for us to enjoy a holiday weekend.

Parents need to teach their young children about America's true history since public schools no longer do Nina. My generation is the last one that knew my cousin that passed away in the Vietnam War.

Wanda Kubat-Nerdin - Wanda Can! the entire Viet Nam war episode is a stain on our history, especially how our soldiers were treated upon their return to the USA.

Nina Hollander, Broker - Memorial Day means so much more to me than Thanksgiving Day (which isn't an option for me anymore). Memorial Day is a National Day that needs to be honored and respected. With so many observances all around the nation, there is no excuse for anyone.

Patricia Feager, MBA, CRS, GRI,MRP good morning again, Patricia... you are correct... all anyone has to do is open their eyes... they will find a way or a place to honor our military dead. As you said, no excuse.

Nina Hollander, Broker - Good morning to you too! This is one National Holiday observance that I find very meaningful. I wouldn't miss it. I like to go early because so many people show up and I want to get a parking space and good seat. I better stuff my purse with Kleenex too.