10 Minutes...if you got it to waste...give this a go!! Here is the Mike McCann version of the May Challenge. Actually turns out that I am quite boring. I can live with that. Mike

By the way...when I entered this...all the fonts looked nice and the photos all should be to the right. Not sure what happened but that pretty much is how my life goes and I just rolled with it! m

1. What was your first job and what did you learn from it?

My first job that paid and that I had to do everyday was being a Paperboy for the Omaha World Herald. I had a route of 59 papers. I later added the same almost identical route with the Grand Island Independent. I did this for four years. Consistency, patience, routine, responsibility. The paper is still a huge part of many people lives and I still critique the various newspaper carriers we have had in recent years. I personally read it online but my wife likes the print version.

2. How long have you been in the real estate or related service industry?

I transacted my first real estate deal in the late 1970's and my 2nd deal a year later. After my third deal in the early '80's I was told I should have a real estate license. Did not even know you needed one. Finally in 1992 I went into real estate full time! For a while my wife wanted me to flip burgers at McDonalds just to bring in some income. Getting started is hard...I did it twice in my real estate career. SO in October I will have been licensed 30 years with 17 of those as a Broker. 3. What is your biggest fear and what have you done to try to conquer it?

Growing old is my biggest fear... I can accept aging but not getting old. I stay young as possible both mentally and somewhat physically. I have watched too many people deteriorate and then spend their last days in a bed...and that will not be me.

4. What would you do if you knew you would not fail?Failure is not in my vocabulary. Learning what I did wrong and trying again is. I failed a lot when I was a young man because I did not have the right mind set. Now I still fail on occassion but I do have the right mindset and that is why I keep on working and working hard. To make up for when I was young and stupid and had little guidance.

5. What is a habit you would love to eliminate or change? Procrastination...I work better under pressure and sometimes that leads to needless last minute work.

6. What is your favorite meal (forget about calories or what you shouldn’t eat)

Nebraska boy here: Great medium rare steak with baked potato and lots of butter and mushrooms and ice cold beer!! If there is room...a bowl of ice cream with crushed nuts on top for dessert.

7. What is something you wish you’d done?

I wanted to join the military but was told I could not fly. It also was during the tail end of the Vietnam War and I did not want to go fight in a jungle in a war we were not trying to win. I should have joined the military anyway.

8. Who has been most influential in your life?

A man named Roger Taylor who lives near Plant City, Florida these days. He believed in me and he gave me a huge break in 1986 when he hired me to manage an ABC Staple Company store in Orlando. This little old country boy went down there and took the sales from $13,000/month to over $180,000/month in a year and a half. Roger was from Nebraska and knew my work ethic and morals. My 'soon to be' wife was in Nebraska so I worked a lot of extra hours that first year and it paid off!

9. What are your favorite business-related books?

I do not read many books.

10. Other than business books what are your favorite things to read? Online articles and topics on real estate, construction related articles.

12. If I came to visit your city for one day what is the one thing I must do or see? Come for Kearney Cruise night. 100's of vehicles moving around after the car show.

13. If I came to your city to visit for one day what is the one restaurant you would recommend? None, But I would suggest we drive a half hour to Sumner, NE and eat prime rib at Tub's Pub!

Pause here:  If it sounds like I do not do a lot or know a lot about this town I live in.  You are correct.  9 years ago our daughter graduated high school.  Since then I spend most of my time in other communities for work, family, friends, or events. We live here out of convenience but do not do a lot here in Kearney.  It is a very nice town...but my friends and our families do not live here. My office is even in a town 60 miles away. (see photo above)

14. If I was going to relocate to your area what advice would you give me that is unique to the area? Be prepared for the wind in the spring. And skeeters. If you can handle those two things...you will survive just fine.

15. Do you have any special talents? I

s being full of BS a special talent or is that acquired talent?

Yes...we will just leave those on the shelf for now though.

17. What is your best character trait? Honesty followed closely by ethics, morals, fairness, and compassion.

18. Have you ever done anything you would never do again because it was too hard or too dangerous? I have been fortunate to have many difficult jobs in my lifetime but none that I considered too hard or dangerous. As a former OSHA Compliance officer for a large Nebraska non-profit, I am keenly aware of the incredibly large number of people who put themselves in harms way...even in our industry. Most do not even realize it.

19. What is your favorite thing to do in your spare time? I like to build or rebuild things...wood, metal, toys, engines, equipment. I enjoy learning how something was built. I also enjoy spending time with my family hiking (hard to do in Central Nebraska) playing disc golf, concerts, and attending various events around the state.

I built our Pergola from western cedar rough milled wood and the Bench. The bench has 99 pieces of cedar wood in it made from the scraps left over from the pergola. I also built the brick steps at the same time. The brick patio I laid in the summer of 2004 and has over 3,000 bricks in it going around the side of the house to the garage.

20. If you could live anywhere in the world where would you want to live? I would like to have a couple thousand acres on the Loup River in Central Nebraska. 2nd choice would be in the mountains. Last choice would be near oceans...too much wasted space for me. I suppose I could live in abeautiful valley where the temperature ranges from the low 30 degrees in the winter and the low 90s in the summer...

21. What is something that we don’t know about you that would surprise us? How smart I actually am. My wife, Robyn thinks I am perhaps one the smartest men in the world...She has called me a Know-It-All since before we were even married!!

She knew a winner when she met me...I just had to convince her of it!!

Gotta run...something needs fixed around here or our daughters house...that is a guarantee!! Until next time...

Work hard so you can hire someone to screw it up and blame it on!!

I really enjoyed your post. I love your sense of humor and had a good time learning more about you. Had to laugh about the skeeters - we don't see too many in my area in SoCal but boy did we have them in New England!

A great blog that you did. I now followed you and made a comment. You can see mine and join me... Hi Mike- Thank you so much for taking the time to share your answers with us!!! Your sense of humor reminds me of Larry's father's...dry and funny!!!  Larry's daughter lives in Omaha and we've been there in the winter. I have never been so cold!!! But, I've also had some of the best food I've ever tasted in Omaha.

Good morning, Mike... so enjoyed reading your post and learning more about you. I get the fear of getting old. As a septuagenarian, I fight being old every day. People keep asking me when I'll retire and I tell them I have no plans... working is what keeps me youthful mentally and physically.

It was nice getting to know more about you, especially since we don't interact much in the Rain.  I am surprised that you do not have any favorite movies.

Hi Mike,
Based on your post I'd say you are right about being smart... a smart a$$.  LOL  How would we get through this life without a sense of humor?

What fun I had reading your answers to the 21 questions. I enjoyed learning a bit more about you. Thanks for sharing, especially #15! 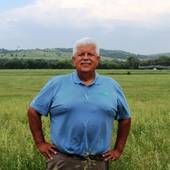