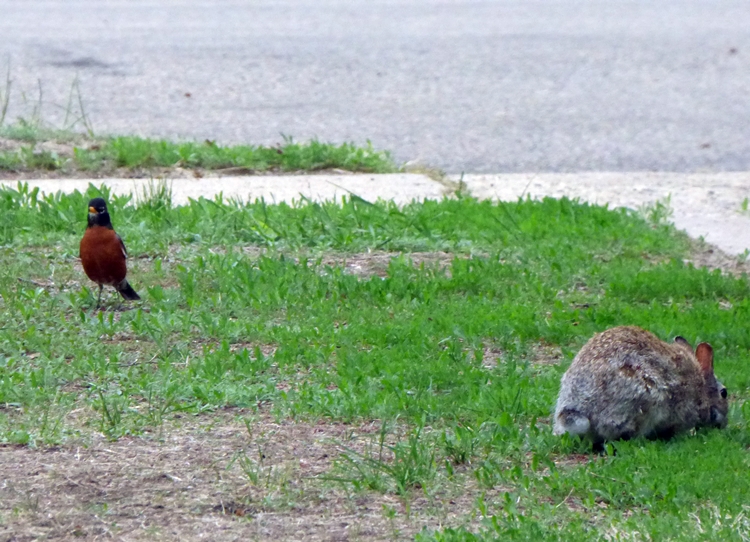 Although the sun never broke through the thick cloud cover and it was a bit windier than the norm there were plenty of blessings to be thankful for.

First and foremost it was a day of prayers of thanksgiving for those who gave their lives for our freedoms (all freedoms including the 2nd amendment). As you surely know we also thanked God for all who have served as well as those currently serving.

Even though the weather was less than one would wish for I did get out and did my favorite thing... tinkered. This included a little construction. I got a little unexpected, unlikely help. And then more help flew in (see the Robin in the top photograph). They keep my spirits bright even though I was already on a bit of a relaxing high for the day.

And then there was the food!

Lunch was at Slim Chickens. As far as I know our Slim Chickens is the only one out of the Arkansas area. The food was good and the service was GREAT!

Dinner was steaks on the grill with baked potatoes and all the "fixings".

A thought crossed my mind about Minot... we have a place called Slim Chickens and another restaurant called The Starving Rooster... is there something in the water?

I have been to Arkansas, but never to a Slim Chickens.  I will have to try one next time we visit family there.

The rabbit looks well feed.  The chickens and roosters must not be taking care of themselves. 😜

Bob, loved your post so many forget that today was the day about those who gave the ultimate sacrifice so we could be bantering about anything and everything... now with that said I love your helper, hope you fed her well:)Endre

I always keep my eyes out for bunnies, but rarely see them. But there sure are a lot of rabbit tracks in the winter so I know they are here!

Good question, Bob... what is in the Minot water? :) I've never heard of either Slim Chickens or The Starving Rooster. Sounds like, all-in-all, you had a nice Memorial Day.

I like that you have such a positive attitude, there are always so many blessings around for us to be grateful for!

Thanks for the morning LOL Ray Henson . From what I saw on the Slim Chickens website it appears that they have about 100 shops, almost all of them in that Southern region.

We have put food out for her Endre Barath, Jr. but it seems she finds better elsewhere as the stuff doesn't disappear. Honestly, I was shocked and a bit startled when she came up to me while I was working. We did have a good discussion after the initial surprise.

I can relate to that Kat Palmiotti as we always see more tracks than bunnies. They move around from neighbor to neighbor. I believe it's an effort to keep preying animals guessing.

As far as I know The Starving Rooster is a one of a kind restaurant Nina Hollander, Broker . The building was once an implement dealer and when the restaurant was remodeling the building they came across an old sign for a harvesting machine with that logo on it.

It was a wonderful weekend Nina BUT now Tina and Timmothy are off on a three week trip, the longest Timmothy has ever taken. Part of the trip is seeing my brother in Mexico. It is causing me some anxiety.

Those are the words I need to hear Nina Hollander, Broker . I am not the worrier that my dad was but I think I inherited the gene.

You can not count them all Brian England . People that think the Christian God is an angry God have it all wrong... he has blessed our socks off!

You as well Roy Kelley . I decided over this weekend that I am going to take the entire Summer much more lightly then I have in the past. Work is NOT going to interfere with my loving life.

There is something about rabbits that always puts a smile on my face.  We use to raise them when I was a kid.

I feel the same Myrl Jeffcoat . They are good sized, soft, and they are NEVER a threat. Bunnies are always welcome in my yard.

LOL must be something in the water Bob!  Slim Chickens and Starving Rooster says it all!  Gotta love that!

That is what I was thinking Anna Banana Kruchten CRS, Phoenix Broker . I wish what ever it is in the water that makes those chickens skinny would do the same to me. 😄