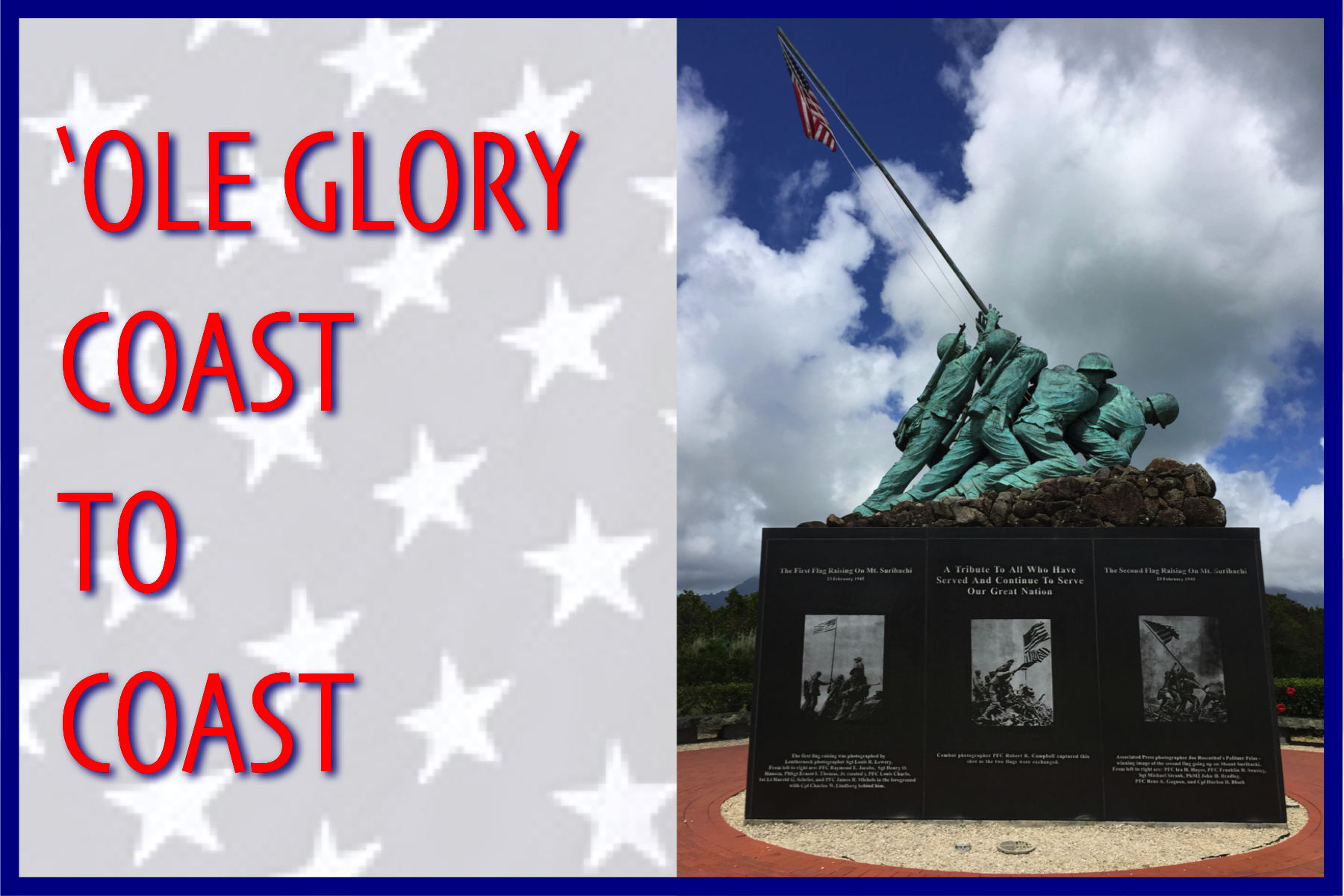 While on a trip to visit our son and daughter-in-law in Hawaii, both U.S. Navy sailors on the island of Maui, we did some sightseeing during the stay. We enjoy learning more about military history and have to say that the Iwo Jima War Memorial captures an important moment in time.

My husband is a retired U. S. Navy Chief, so visiting such monuments always brings out our patriotic side. The monument is a replica of the Joe Rosenthal-inspired memorial in Newington, Connecticut, and is slightly different from the memorials in Arlington, Virginia and Harlingen, Texas.

During WWII, training for the Battle of Iwo Jima took place on:

On Feb. 23, 1945, American flags were raised on Mt. Suribachi, signifying allied victory in the Pacific. The capture of Iwo Jima saved thousands of B-29 flights and the lives of 25,000+ Army/Air Corps crewmen.

The Iwo Jima War Memorial is located near the Main Gate aboard Marine Corps Base Hawaii, Kaneohe Bay, Hawaii. It pays tribute to all those who have served in a military capacity to protect our freedom.

And I thank them all, heroes every one!

This is an entry to 'Ole Glory Coast to Coast' - June Active Rain Challenge. Many thanks to Mark Don McInnes, Sandpoint-Idaho and Endre Barath, Jr. for hosting this month's challenge!

Good morning Wanda. You can never get enough of Old Glory and those who sacrificed to keep us free. Enjoy your day.

Good morning, Wanda... as often as I've been to Hawaii (three of our grands were born there), for some reason I missed this memorial. And now I'm very sad about it as I have no idea if I will ever return to Hawaii.

I think I remember visiting this during our last trip to Hawaii but that was a very long time ago.

This was quite impressive as we walked up on it, Wayne Martin. Also, the red bricks that surround the base of the monument have names of military heroes on them.

We may never visit again either, Nina Hollander, Broker. It was quite impressive and our children also showed us the true beauty of the area rather than just the touristy side of the island. We also went to Pearl Harbor and that was such a reverent place.

This one I will always remember, Brian England. I imagined see them soldiers bringing the flag pole straight up and the American flag waving in victory. What a sight!

What a wonderful site for you to visit. I'm sure this moves many people when seeing this Memorial. I agree, I too imagine seeing the soldiers bringing the flag pole straight up and the American flag waving in victory!!

Hello Dorie Dillard Austin TX, I still get chill bumps when thinking of the Iwo Jima War Memorial, it is such an expressive display that hits the emotions, more so in person. Thanks for stopping by this morning!

Thank you for sharing the information. Wishing you continued success.  Have a wonderful day and sell a house.  bill

Thanks for offering a comment Bill, have a wonderful day as well!

Good morning Wanda Kubat-Nerdin - Wanda Can! I agree with Wayne Martin you can never get enough of Old Glory.

And I concur, Leanne Smith!

Hello Wanda and you pick a special way of showing Old Glory to us here in the rain for the contest.  Good Job.!

Hi Wanda - that picture is etched in my brain.  There may be variations but it represents the blood and sacrifice of our armed forces.

Wanda Kubat-Nerdin - Wanda Can! our flag has a special meaning to most people, but it is particularly special to those of us who have served.

Hi Will Hamm, am glad that you have enjoyed the posts so far. It's easy to write about something that is part of my military heart and patriotic soul!

It truly does Grant Schneider and shows the spirit of all soldiers that helped lead us to victory and grabs the emotions at the same time! Heroes wear dog tags.

As a child, I remember reciting the Pledge of Allegiance louder than any other child in the class. It was and still is a symbol that I am a free person in the greatest country in the world, George Souto. Thanks again for your service!