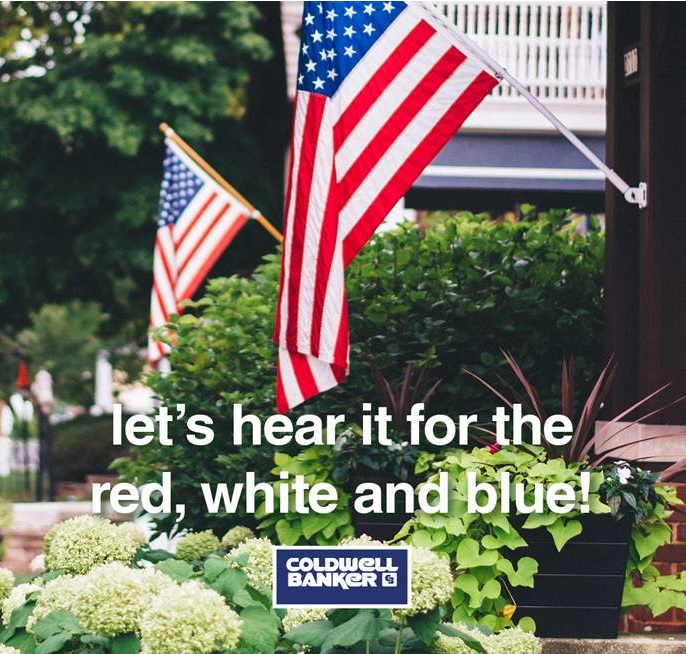 June 14th is Flag Day and our Stars & Stripes are celebrating their 245th birthday today. Flag Day commemorates the adoption of the American Flag on June 14th, 1777. Flag Day is one of those holidays that many people are not always aware of as we don't have parades, don't get the day off from work or school. As a result, it's easy to let the day pass without noticing.

In 1916, President Woodrow Wilson issued a proclamation officially establishing June 14th as Flag Day. In August 1949, National Flag Day was established by an Act of Congress, even though it's still not an official federal holiday. (Maybe if it was, more attention would be paid to Flag Day.)

If you haven't already put your flag, go out and proudly fly the Stars and Stripes today in your front yard! My flag is out there along with a red, white, and blue wreath on my front door, stars and stripes pillows on my garden bench, and bunting across my front porch. All were put out for Memorial Day Weekend and will continue to decorate my home through Independence Day.

DO YOU KNOW WHAT OUR FLAG'S RED, WHITE & BLUE COLORS STAND FOR?

Red stands for valor and hardiness.

White stands for purity and innocence.

HOW TO HANDLE & FLY THE AMERICAN FLAG:

"I pledge allegiance to the Flag of the United States of America and to the Republic for which it stands, one nation under God, indivisible, with liberty and justice for all."

I am the flag of the United States of America.

I fly atop the world's tallest buildings.
I stand watch in America's halls of justice.
I stand side by side with the Maple Leaf on
the worlds' longest undefended border.
I fly majestically over institutions of learning.
I stand guard with power in the world.
Look up and see me.

I stand for peace, honor, truth and justice.
I stand for freedom.
I am confident.
I am arrogant.
I am proud.

When I am flown with my fellow banners,
my head is a little higher,
my colors a little truer.

I bow to no one!
I am recognized all over the world.
I am worshipped — I am saluted.
I am loved — I am revered.
I am respected — and I am feared.

I have fought in every battle of every war
for more then 200 years.
I was flown at Valley Forge, Gettysburg, Shiloh and Appomattox.
I was there at San Juan Hill, the trenches of France,
in the Argonne Forest, Anzio, Rome and the beaches of Normandy.
Guam, Okinawa, Korea and KheSan, Saigon, Vietnam know me,
I was there.

I led my troops, I was dirty, battle worn and tired,
but my soldiers cheered me And I was proud.
I have been burned, torn and trampled on the streets of
countries I have helped set free. It does not hurt,
for I am invincible.

I have been soiled upon, burned, torn and trampled on
the streets of my country. And when it's by those whom
I've served in battle — it hurts.
But I shall overcome — for I am strong.

I have slipped the bonds of Earth and stood watch over
the uncharted frontiers of space from my vantage point on the moon.
I have borne silent witness to all of America's finest hours.
But my finest hours are yet to come.

When I am torn into strips and used as bandages for my wounded
comrades on the battlefield, When I am flown at
half-mast to honor my soldier, Or when I lie in the
trembling arms of a grieving parent at the grave of their
fallen son or daughter, I am proud.

MY NAME IS OLD GLORY. LONG MAY I WAVE.

Happy 245th Birthday to Old Glory! Long May She Wave!

Kat Palmiotti thanks, Kat... here's the answer on the left side of the door...

The union, or the blue section of the flag, should always be placed to the left of observers or visitors. This means your flag should be positioned to the left side of your front door, not the right.

Wayne Martin hi Wayne... here's the official explanation about why the flag should be on the left side of the door:

The union, or the blue section of the flag, should always be placed to the left of observers or visitors. This means your flag should be positioned to the left side of your front door, not the right.

Joan Cox hi Joan... we learned what the red, white, and blue represented in Girl Scouts... but I still need a reminder now and then.

I didn't even know it was flag day much less all of the great information you provided about the flag.

Brian England hi Brian... when I was in school, Flag Day was a big event... didn't they cover that when you were in school? Or was school out by Flag Day?

Flag Day (also known as Donald Trump's birthday) is a wonderful time to celebrate what has made America great (again).

Hello Nina,  I am out and about for 2 hours today and planning to count how many flags I can count.  It is a Special Day!

Will Hamm hi Will... can't say it's ever occurred to me to count flags... but happy counting to you! :)

Hi Nina- I love the poem by Howard Schneiber, especially the last stanza.  This morning on our way to and from our errands, I noticed all of the flags flying so proudly.

Nina Happy Flag Day to you also.  This is a National Day I can definitely get behind

Kathy Streib hi Kathy... we had huge rain storms this morning and the sun just came out. I've been inside all day getting material ready for a new listing so haven't been out to see if there are more flags out than usual.

George Souto hi George... totally agree... National Flag Day is a day I can and do get behind!

Paul S. Henderson, REALTOR®, CRS hi Paul... sounds like something I'd say to my brother! Happy Birthday to your sister!

I really enjoyed reading the information, little poems, and quotes below the video. I especially like the one referencing space exploration.  Nice Job!

Sheri Sperry - MCNE® hi Sheri... so important for us to keep getting the word out. I saw interviews on TV yesterday where people were being asked how many stripes or stars our flag had and they had no clue. When asked who sewed the first flag someone answered Donna Karan; someone else answered Abraham Lincoln. It's appalling.

Ricardo Mello thanks, Ricardo... I'm just happy the temperatures are down in the mid-80's this weekend!