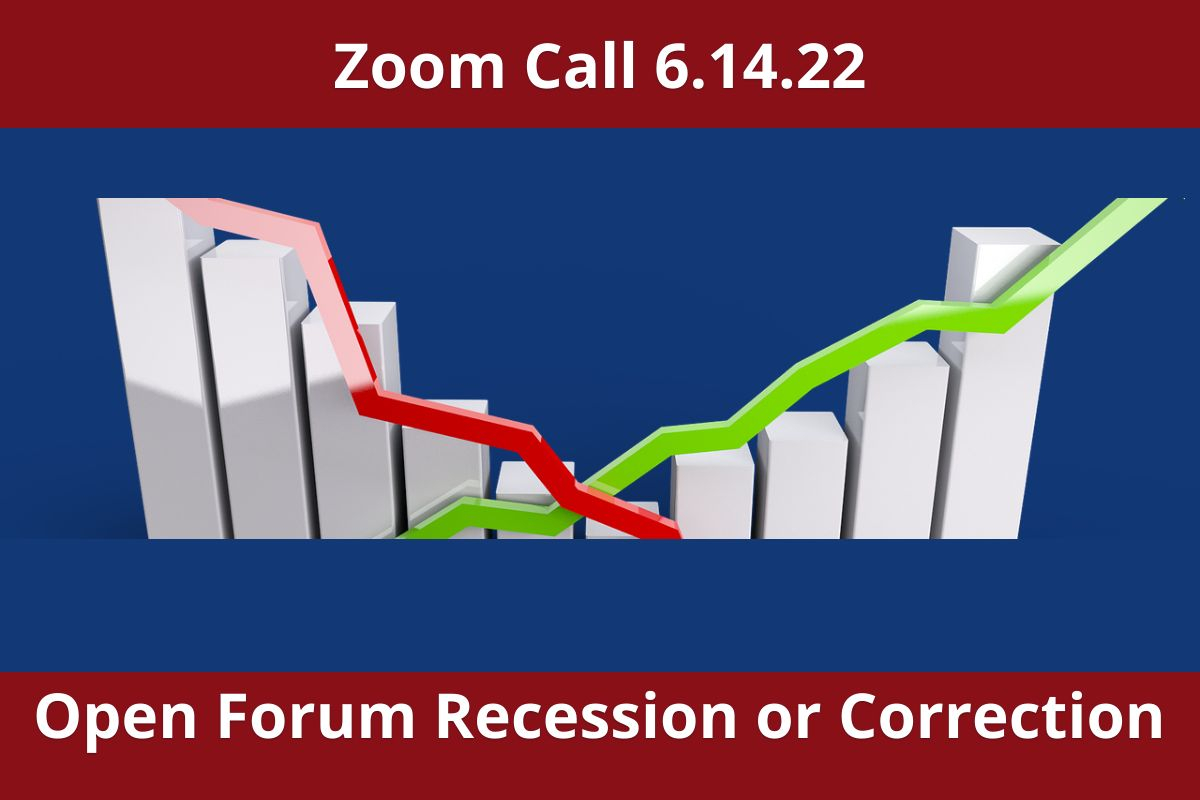 The Zoom call this week was an opportunity for ActiveRainers to share their experiences in the current market. With interest rates going up and the threat of runaway inflation are the current values in homes a repeat of the debacle of 2008

Debe Maxwell opened up the meeting with the request that it be in an orderly manner.

Eileen Burns from Florida opened up the conversation with her experiences with commercial sales in her area.  The feeling that the market is lowering a bit for commercial.

Hannah Williams offered that in her area, builders are having problems with keeping workers. The market in her area has a lot of individual workers doing side jobs for homeowners as it is more profitable to them than working on a construction site.

She also offered that commercial land in her area is seeing a down slide in prices.

She has no indications as to whether there is a bubble in the making and feels that it will be like it was in 2008 when the market crashed within a matter of days with little warning.

Carol Williams offered her perspective as a retiree and feels that the biggest issue affecting our economy is the prices of fuel, which impacts everything as well. She feels that she can get by with her essentials and will put off any major work at home until the economy stabilizes some.

John Meussner offered up details off of a presentation he was preparing. Back in 2008, he experienced a surplus on market of spec housing that was largely caused by the lending practices that were runaway at the time and led to the drop in the industry.

We are experiencing that opposite of that cycle and are inventories are still lagging but are coming into the annual spring/summer spurt. First time homebuyers are a large part of the economy but are being left out due to the demand and they have little capital.

His feeling is that there will be a slight decrease in appreciation which should make for more stability.

Rocky Dickerson feels that his market is shifting into his prime marketing. By adding statistics to his video channel, he is seeing more activity for areas that he has focused.

His market is extremely active for statistics and marketing data.

Will Hamm in Denver offered that the sales are still active but the biggest issue is on rentals where there is high demand and rentals are approaching $3,000 per month for small home rentals.

The inventory is so tight that he had one client that viewed 58 homes and put in 12 contracts with a cushion of $75,000 over asking on some contracts. Lease backs are also string for sellers for up to 2-3 months.

Dorie Dillard in Texas sees that there is still a strong sellers' market but buyers are starting to get more particular about the houses. She believes that many of the buyers are just backing off to allow the market to settle and may come back at end of summer or maybe even next year.

Sellers cannot get away with excessive prices and wait for multiple offers at auction. Buyes are being more particular.

Anna Kutchen in Phoenix has seen the levels of inventory drop by app 10% and prices coming down some with sellers being smarter with their asking prices.

She has seen higher end prices getting more negotiations in to the prices.

Multiple offers are staring to be less common as she also sees buyers backing off on the escalating values.

Ed Silva in Connecticut also offered that inventory levels are creeping up slightly but prices are not coming down very much, except for those sellers that just had overpriced homes to start.

The biggest factor in the CT economy is the labor forces that are sitting back and not seeking jobs. Manufacturing and retail sectors all have want ads as does the restaurant industry, but people have either moved away or are content to stay home and collect.

An example of young people not wanting to work is the shortage of lifeguards for the summer water recreational areas. As many as 40% of the public swimming areas will be with few guards and many will not open just so as to not be at liability.

Dorrie Dillard has seen premiums being offered for summer life guards and still not getting activity.

George Souto sees an increase in first time buyers seeking their first homes, but they have little in funds or marginal credit so they just need to work on saving to be able to buy while they work on their credit.

I'm sure there were others that contributed but I had to leave the call to attend to a personal matter.

Ed there was a lot of good discussion this week.  Thank you for the mention!!!

I am so appreciative of your summaries.  Until things slow down (and realistically), I don't want that to happen, I can't make these calls because of the activity.  I have found that the Sedona market is softening, but it is still a seller's market. Many sellers are not moving off their price point even though inventory is up a little.

Hi Ed great recap and we all thank you for doing this every week!  It was a lively call with lots of great information.

Hi Ed- what a great summary of Tuesday's zoom. It is such a good group of members and hope that more will join us.

Thanks for the recap from the various attendees! I had hoped to attend but life interfered. It's interesting to hear what people had to say regarding their respective markets. {Perhaps another session like this in another month or 2 would be insightful.

Great recap Ed. Glad I was able to tune in and hear how all the economic changes are effecting different areas in the country.

Good Morning Ed Silva, thanks for the recap. I was not able to attend but you take the best notes. Have a nice week.

Like your re-cap of the Zoom Meeting on Tuesday. It was a great discussion and interesting to get perspectives from Coast to Coast in our market. I think in September would be great to have another discussion evaluating July and August..any maybe even sooner.

I definitely missed a great meeting, so many solid insights from those that attended and contributed to the conversation.

Good morning, Ed... after yesterday's 75 point increase in rates with more increases projected, we will be in for some interesting times in the near term.

Another great summary  Ed Silva . We can always count on your recaps and appreciate all your time and effort!

Thank you SO much for giving a recap of the zoom call. We are experiencing a similar market; inventory is still incredibly low but creeping up ever so slightly. There is still a strong need for housing. Rentals are non-existent, and qualifications are stringent. My specialty is residential; business is brisk.

Thanks for the detailed summary of the zoom meeting, Ed. I think this is something that should be done at least once a month and enjoyed the discussion!

Thanks for the cliff notes of the exchange. Hopefully I can make the next one. Tuesdays are usually very full with clients and Association meetings.

Thank you for the "Ed Notes" and hitting the highlights @edsilva (Your name will not hyperlink for me.. only yours for some reason... put in @edwardsilva too and nope, won't kick start but we tried!) Why is that ARMS?