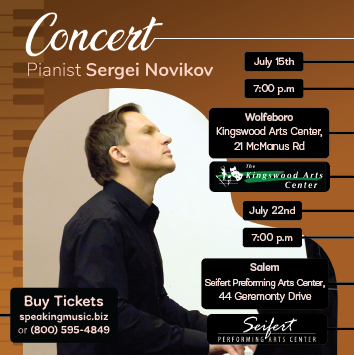 Accomplished pianist Sergei Novikov is returning to New Hampshire where he will perform concerts in Wolfeboro and Salem. First, on Friday July 15 at 7 p.m., Novikov will entertain the audience at the Kingswood Arts Center, 21 McManus Rd., in Wolfeboro. Then on Friday July 22 at 7 p.m. he will perform in Salem at the Seifert Performing Arts Center, 44 Geremonty Drive.

From Tchaikovsky to Phantom and from Ellington to Joel, his performance will delight the audience, all with a good sense of humor.

Sergei has performed for such luminaries as President George H.W. Bush, Secretary of State Condoleezza Rice, President Joe Biden as well as Billy Joel, Reba McEntire and Paul Newman. He opened a program for first lady Barbara Bush. Sergei received official recognition from the Queen Mother of England for his music. He performed a solo concert in the same WCRB Classical Concert series as the conductor of Boston Pops, Keith Lockhart, at Copley Square in the heart of Boston.

Part of the profits from concerts will be donated to the International Rescue Committee (IRC) to help assist Ukraine. Ticket reservations can be made online at speakingmusic.com or by calling the 24/7 ticket line at (800) 595-4849.

Great information.  Thanks for sharing and enjoy your week! 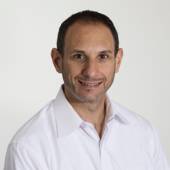