Last Wednesday, I got a mid-week break from work to take a 5-hour sail aboard one of the Windjammers on display in Boothbay Harbor for the town's annual Windjammer Days festival.  Each year, the town organizes the festival, which includes sailing, a parade, food and games for kids, along with some private receptions and parties put on by various local groups.  I was there with my boyfriend, who works on our Senator Susan Collins' campaign staff.

That morning, he picked me up with Mister Bagel and a coffee in hand (if you visit Portland, go there for breakfast - I'm addicted), and we headed up Rte. 1.  When we got to Boothbay (about an hour from Portland), we met Dawn Gilbert, owner of the Heads of the Harbor hair salon, and the Lincoln County chair for the campaign, and headed down to the schooner, The Spirit of Massachusetts.  The boat is one of three owed by Ocean Classrooms, a local non-profit that takes at-risk kids out of school to attend classes on the water.  According to the teachers, something about being away from normal life and relying on their classmates as teammates really changes kids' demeanors and helps them grow. We set out to sea on a perfect morning, and during our cruise Dawn pointed out the islands in the harbor, and told us stories about their history.  We also got an up-close look at the Navy Warship that was in the harbor for the day, along with a closer look at some of the other windjammers.  At one point, we had a musical battle with the Spirit of South Carolina - they had a bagpiper who was blasting out tunes, to which one of our crew members played back her fiddle. After the sail, we went straight to the high school, where we prepped for the parade.  Our float was a montage of patriotism, and staffed by Uncle Sam and some cute flag-waving kids.  But the best part was that a nice man donated his '65 Beetle convertable to the parade, which we got to lead the float in.  It was a standard, and a little scary on hills, but all in all the crowds were cheering and Herbie was a big hit! After the parade and dinner, we reluctantly got back in the car and pointed it South, with thoughts of work-day Thursday creeping in to our rejuvinated minds.  Sometimes the best vacations are taken one day at a time...

Michelle, Great photos sounds like a wonderful day, and we all need to look at the places that make our home towns so special. I will visit Maine this summer as my wife and I go to KennebunkPort each year to see some friends. Have a terrific Fourth of July. Steve

It sounds like  you had a wonderful time. I think most of my best vacation days are one day at a time.

P.S- how did you disappear from that picture while I was writing this?

Glad you had fun there, Michele. I know Dawn and have worked with your bf during campaigns. 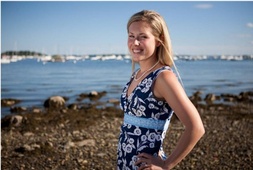