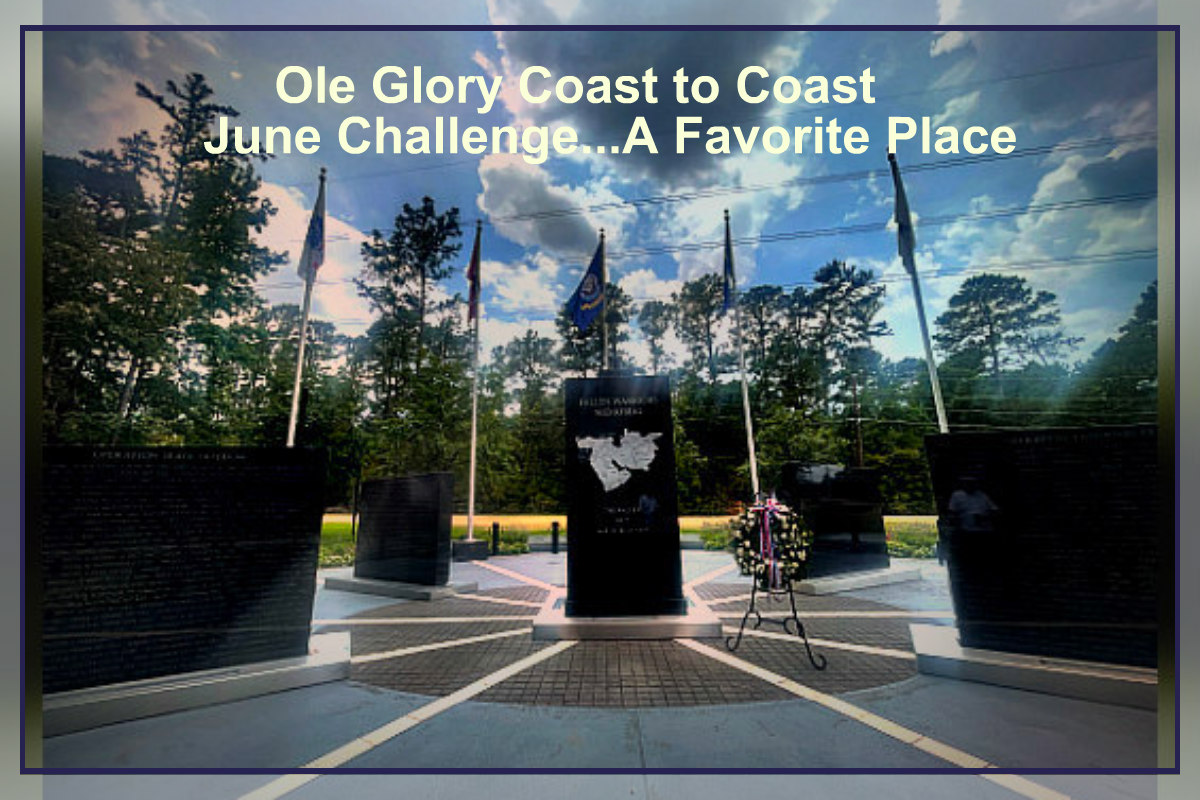 This month’s challenge…Ole’Glory Coast to Coast-June ActiveRain Challenge...has been a fun one and I have a feeling that it also caused many of us to be more aware of the homes and public places around us that proudly display Ole Glory.

When Larry and I returned to the Houston area, we discovered the Fallen Warrior Memorial…not far from where we walk at Kickerillo. The Memorial is dedicated to the more than 600 Texans who gave their lives in the war on terrorism…from the 9/11 attacks to the present. What I wish I could have picked up in a video are the names of the fallen announced in the background. It has a very spiritual feel to it.

There is also a separate Service Dog Memorial that reminds us of our furry friends who have played their part. Old Glory flies high from a pole in the esplanade as you approach the area. Around the Memorial are the flags from the different branches of the military.

A thoughtful mind, when it sees a nation’s flag,
sees not the flag, but the nation itself. Henry Ward Beecher.

This is my third and final entry in this month’s challenge. Thank you, Mark Don McInnes, Sandpoint-Idaho and Endre Barath, Jr. for hosting this.

Good morning Kathy. As a result of the challenge this month more attention was paid to displayed flags. This past weekend, one outside a post office drew my attention and commenced a slew of old memories. Unbelievable! Enjoy your day.

I have become so much more aware of flags flying in Austin. Some are even in some unlikely places while other places there is not one and I don't know why! Love the quote you used....its what i think of when I see our flag...the nation! Great post on what you found in Houston...every City has something we should take time to visit and appreciate.....just like you and Larry did.

Wow, that is an amazing memorial and you definitely put together an outstanding post for the challenge!  Now I see why my posts never get featured, haha.

Good morning, Kathy... what a beautiful place. If I ever get to Houston again it's something I'd want to put on my list to visit.

What a great idea Kathy Streib . ND has a 911 memorial located inside The International Pease Garden. This is a wonderful Garden/Park located on the boarder of the USA and Canada. This memorial includes some of the remaining steel beams from the building. Hi Kathy - that is a wonderful finale post.  There are memorials in many of our communities to this war on terror which came to our shores.  United We Stand.

As I have not been on here much I had not since the new "challenge" but I love it.  I will look forward to seeing everyone's posts especially if they are as good as yours.  Thanks for sharing and have a wonderful day!

What a beautiful tribute to the Fallen Warrior Memorial, and a wonderful visual tour. Your story and photos really bring the memorial, and Ole Glory, to life!

Hi Wayne Martin isn't it wonderful how this challenge has opened our eyes to something that has been there for us all along.

Dorie Dillard Austin TX I agree. We never would have gone to this Memorial but happened to drive by it. When Larry was geocaching, we discovered a lot of parks and areas we were unfamiliar with.

Brian England that was sweet of you but it doesn't matter if your post gets featured...it gets seen and read!!!

Nina Hollander, Broker  You would really like the Service Dog Memorial. There are always wreaths in the area.

Bob "RealMan" Timmo that really is special.  You should do a post on it.

Hi Hannah Williams Thank you!!!!  Hope all is well with you.

Norma J. Elkins be sure to check out the July Challenge...right around the corner.

Jeff Dowler, CRS Thank you so much for your very kind words!!!!  I appreciate it.

Kathy that is a beautiful memorial honoring our service men and women.

What a wonderful tribute to Ole Glory.  I really like the memorial to our Warrior Dogs.  That is a tribute that you rarely see.  It adds a nice touch to your post.  I really enjoyed reading it!

Kathy Streib , our Flag flying at a Memorial seems to evoke unexpected emotions from anyone visiting.  Our four legged friend are seldom mentioned.  Nice to see.  Thank you Kathy for your participation.  m

This is an amazing entry into the Old Glory Coast to Coast Challenge, Kathy.  I especially like that top photo.

What a fitting tribute to our fallen heroes. I agree this challenge has made me more aware of Ole Glory flying high as I travel around as well.

Have a wonderful 4th of July weekend!🇺🇸