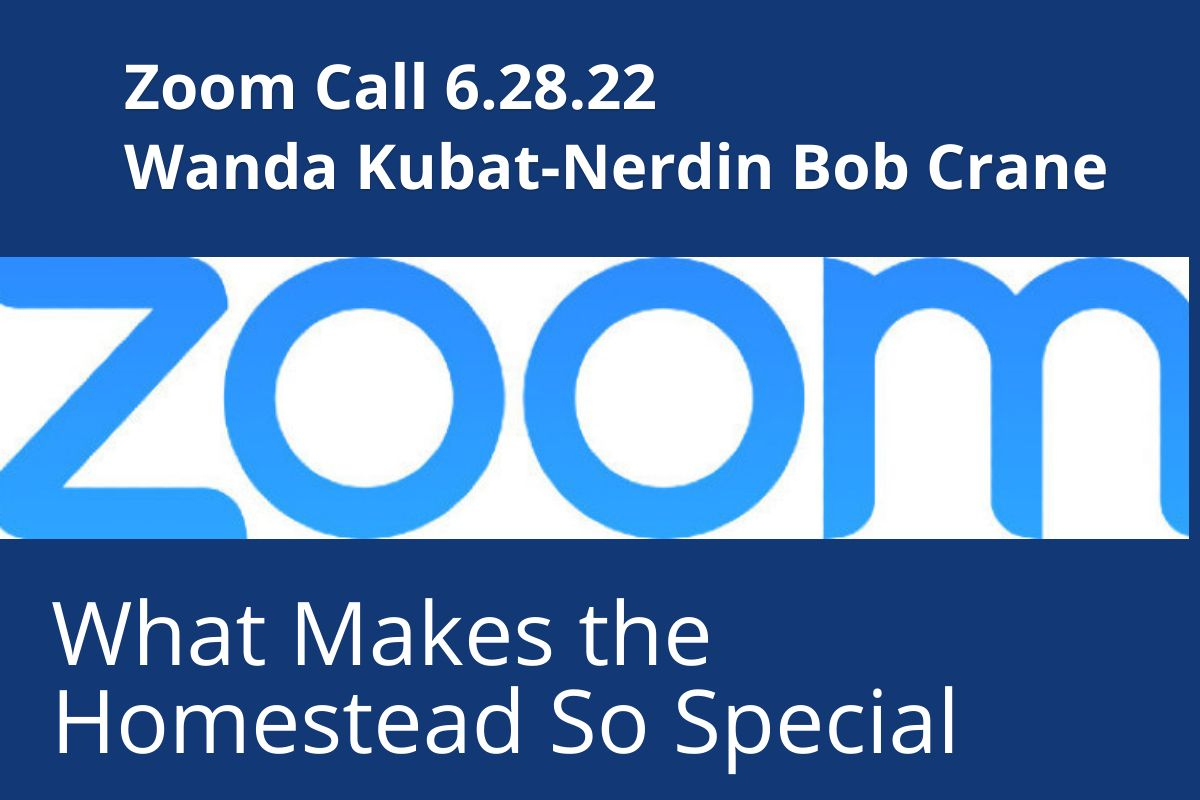 What Makes the Homestead So Special

The Zoom call this week, moderated by Eileen Burns featured 2 ActiveRain members. Wanda Kubat-Nerdin and Bob Crane.  Each gave a presentation on how they came to live where they are, and some of the reasons why they feel so comfortable there. Wanda started the session. She noted that the family greatly appreciate the outdoor activities that are available. Her grandparents settled into the area because of the moderate weather, with 360 days of sunshine a year, clean air, and so many things to do.

The So Utah area recently hosted the Ironman Triathlon, which has historically been held on the island of Hawaii. They also had the Huntsman Senior games which brought in people from 65 countries around the globe. Wanda offered some perspectives on home values in her area, much of which is comparable to areas of California. The difference would be the amount of space, however. Bob Crane calls Wisconsin home. Wisconsin is known for its dairy industry but there are also 17 million acres of forests.

Bob offered a brief description of the various industries that are served by the trees native to Wisconsin. When asked about his first slide, Bob explained, that it is just a rock formation. Unlike Utah, where there are so few trees, there are many such formations throughout Michigan but are mostly hidden by the large trees that are surrounding them.

Bob worked for the forestry service when he first got out of college and came to settle in Michigan due to the high levels of education, so many opportunities for families and the general feeling of security that prevail. Wisconsin has many miles of lakefront views due to the Great Lakes. Their water is also of high quality and most plentiful.

Hunting is popular in Wisconsin and highly regulated.

Both spoke with much zeal and knowledge of their home state and enthusiasm. There were questions as well, but I won't include them here.

What Makes the Homestead So Special

Sorry I missed this one but the end of the month is tough due to closings here in Boise, Idaho!  I have enjoyed some of what Utah has to offer, but have a lot to learn and experience in Wisconsin still.

I enjoy hearing why people fell in love with the place they call home!

Hello Ed - another well-documented recap of two very active AR members sharing their home court advantage.  Thanks to the presenters and to you who consistently keeps us informed with these Zoom summarizations.

Utah definitely seems like a beautiful place to call home and from the blog of Wanda Kubat-Nerdin - Wanda Can! I can tell that she loves living there!

I am certain all who attended last Tuesday's Zoom session benefitted from their presence, Ed.

Good morning, Ed... I was not able to attend on Tuesday, but after reading you recap I feel as if I was there!

Thanks again for the very detailed re-cap of Tuesday’s zoom meeting, Ed. I enjoyed discussing the many reasons why people choose to live in southern Utah, myself included!

Hello Ed and thank you for your recap for the zoom call, I wish I could of been on it but was on vacation in Pennsylvania visiting my family back east.

Ed both Bob and Wanda did an excellent job in presenting their states as very desirable places to live.

Hi Ed- both Wanda Kubat-Nerdin - Wanda Can! and Bob Crane did a splendid job of sharing with us why they love where they are.

Thanks for sharing this Ed, both Wanda Kubat-Nerdin - Wanda Can! live in states with plenty of beautiful sites and great places to live and work

Thanks for the recap of Wanda and Bob's presentations. I had really hope to be there but it was not to be.

Have a wonderful holiday weekend!

You did a stellar job recapping the call Ed Silva 😎

Hi Ed Silva - You always do a wonderful job with the recap.  I really appreciate it since I can rarely be on the call.  However, I think there is a typo for the number of days with sunshine.  360 is basically the entire year and I am pretty sure Tuscon has the sunniest days per year at a little more than 300.  If I am wrong, I stand corrected!