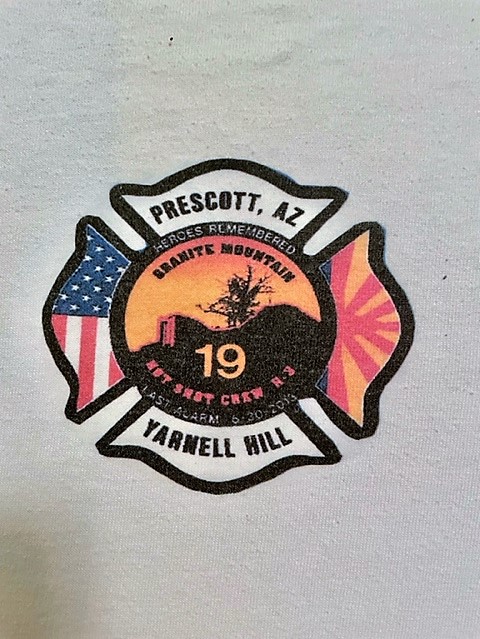 Anytime you drive by the area of Yarnell, Arizona, and if you're from Arizona, you know the significance of this town and the tragedy of June 30, 2013.  That day nineteen hot shot firefighters lost their lives in a tragic fire that had overtaken the area.

The Yarnell fire started from a lightening strike and spread quickly due to monsoon winds, a seasonal occurrence in Arizona.  A crew of 20 hotshot firefighters trained for this type of fire assembled to battle the fire.  One of the firefighters separated early on as a lookout.  The fire took a deadly turn and 19 firefighters perished in what is considered the worst fire tragedy in Arizona history.

I remember vividly driving back from my hometown in Kansas, on the last leg of my 1000 mile drive on July 9, 2013.  As I made a left turn and drove south of Flagstaff, a long train of fire trucks was driving south on I-17, having just been to the memorial that day.  The remembrance of it all was just overwhelming, driving next to those fire trucks.  I slowed down, joining them for a while.   I'll never forget that sad drive home.  Thinking of the families that had to endure that tragedy.

This is a simple tribute in their memory to honor them on this ninth anniversary, and to share where you can find the memorial that was opened to the public November 30, 2016.  Below you'll see the Memorial on July 9, 2013 with then Arizona Governor Jan Brewer, then Vice President Joe Biden and MANY others honoring the firefighters.   Firefighters came from across the country to pay tribute to all 20 firefighters, recognizing that Brendan McDonough has worked to maintain the legacy of the 19 who sacrificed their lives.

The Granite Mountain Hotshots Memorial State Park is comprised of 320 acres and is a seven mile hike to and from the tragedy site where 19 gabions are placed in the exact location of where the firefighters were found.   Each gabion is linked together by heavy chains, a symbolic gesture.

The hike starts out with the "hotshot trail" where you'll see 19 plaques as you traverse the trail of each fire fighter and their story.  As you hit the top of the hill, you'll be able to look down to the tragedy site and that trail is the "journey trail."

One of the trucks from the Granite Mountain crew is now on display in the         Hall of Flames Firefighting Museum with special remembrance of the 19 hotshots.   It's been said that this is the largest firefighter museum.

One of my fellow realtors created this t-shirt in their honor.  Prayers for their families and those that knew them. I think I mostly understand what you mean but I’m sure there’s more to learn overall. /

Yes, LOTS Laura Cerrano .   They are working to improve equipment and figure out how communication was lost and the 19 couldn't be located and perished.  Very sad.  There are about 100 hotshot firefighters in the US.  They are trained to fight wild land fires, a unique bunch.  So to lose 19 was a terrific blow.  The video of the 2+ hour memorial service with our former Governor and former VP was heart wrenching to watch, but I watched all of it as I felt a duty to those firefighters who gave their lives to save others.

That was a terrible tragedy. Thank you for your tribute on the anniversary of that day.

A friend of mine wanted to hike up to the memorial but he was out of shape and had to turn back after we were a third of the way up, haha.

What a touching tribute, Jan... I remember this story well and for some reason it feels like yesterday that we lost those brave heroes.

What a wonderful tribute for these hot shot firefighters ..they were brave heroes on their Anniversary of this terrible tragedy. Love the T-shirt created!

Thank you for stopping by Kat Palmiotti .  Just awful!

I know you wanted to make that hike happen Brian.  I'd love to make a field trip and hike to the memorial - but this winter!   Thank you for stopping by!

Thank you for commenting Nina Hollander, Broker .   Such an awful day!

Dorie Dillard Austin TX , I don't wear the shirt much.  Every once in a while.  The man who created the shirt also created a huge quilt.  Not sure where it's displayed, maybe at the real estate school I used to teach.  I'll have to visit that spot!

Have a wonderful 4th of July!

Jan- I do remember the tragedy. To lose one person to fire is horrible but 19 is unbearable. I'm glad that from this they have looked at better communication and even better equipment. We need to remember these 19 lives lost.

Hard to believe it has been that long ago, for those whose families were touched by this tragedy I am sure it feels like yesterday, what a great tribute, Endre

Good morning Jan - that is certainly a tragedy no one in Arizona will forget.  It tells us how much we should thank and appreciate fire fighters along with other first responders.

Bless the souls of those who perished. What a horrible tragedy for Arizona and the firefighter community.

There are no words for this tragedy that seems like it happened yesterday. Thank you for this heartfelt tribute!

Jan, these brave men and women are true heroes to take on such a dangerous occupation! I remember when living in Glenwood Springs, Colorado when 14 firefighters died in the Storm King fire in July of 1994. I remember driving past when it was raging and just crying! Those nineteen hot shot firefighters who perished in Yarnell will never be forgotten either. This is just so very sad!

Jan Green - Scottsdale, AZ we often talk about the dangerous job our men and women in blue have, but out firefighter also put their lives on the line keeping us safe from fires.  They deserve our thanks and respect.

Agreed Kathy Streib .  Such a sad anniversary. Thank you for the re-blog.

Thank you Endre Barath, Jr. .  I spent the weekend in Prescott, right by Yarnell.  Those hotshots were working under the Prescott Fire Department and my friend's house was overlooking Granite Mountain.  I weekend to remember.

It was and still is for those families Pat Starnes-Front Gate Realty .  Thank you for commenting!

For those families, even more so Jeff Dowler, CRS .  Thank you!

That's also a sad tragedy Wanda Kubat-Nerdin - Wanda Can! .  It would be GREAT if these never happened again. Organization is key to getting these firefighters home in one piece.  Thank you for your comments. -

Indeed George Souto .  Everyone in public service puts themselves last it seems, and yet they may be paying the ultimate sacrifice.  Spending this past weekend in Prescott and talking with others about this anniversary was so heartbreaking.  This is something that will long be remembered as a local tragedy that touched many lives!  Have a good 4th of July!