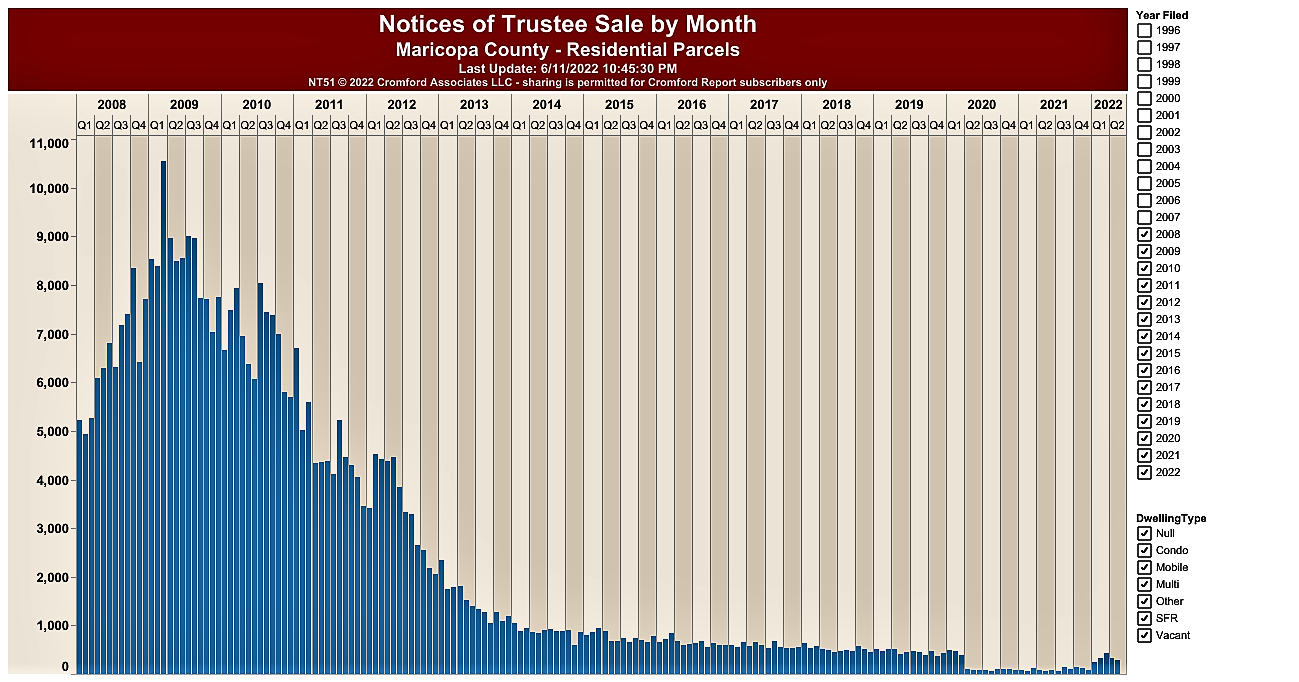 The opening graphic for the June housing market report reflects a tiny bump in foreclosures.  Tiny because if you look historically, these are still very low Notices of Default.  In Arizona, a Notice of Default is issued when someone has missed three mortgage payments.  If the home owner misses three more mortgage payments, the home is officially listed as a foreclosure with the home will either be referred to HUD to sell, be sold at auction on the courthouse steps.  Either way, these numbers are still very low and should put rumors to rest about mounting foreclosures in the Phoenix metro area.

Active listings have increased significantly year over year, by 56%.  The number of active listings is still low by normal market standards.  A normal housing market in Phoenix would have DOUBLE the number of listings shown.  While the number of available homes for sale is increasing, home sellers can take the time to make sure  their homes are in perfect condition now that the multiple offer scenario has slowed. With more homes on the market, you might expect to see the time it takes to sell those homes to increase significantly.  Don't rush to judgement on this aspect of the housing market, because, as you can see, homes are still stilling in about 27 days.  In June, 2021, homes took on average 25 days to sell.  So this aspect of the housing market is not changing as quickly as you might expect. As home prices have risen, the number of those homes available to sell in lower ranges has diminished.  But also, the sheer number of homes over $800,000 has increased significantly.  Notice that homes over $1 million are selling in a larger volume than previously seen.  Those with cash aren't worried about interest rates. Considering that inventory is increasing, you might expect sales prices to drop or stall.  That has not happened yet.  The leading indicator for market changes is price reductions.  This report is as of 7/1, while the others above are from 6/25. The annual sales rate for home has slowed since the peak of May, 2021.  That month outsold any other month in the history of the housing market in Phoenix.  The pandemic had a lot to do with that number.  Many employed by companies are now working from home and added an extra room or office space, hence more home sales.  The number of companies and people moving to the Phoenix metro area has increased after the decline from the housing recession.

For more detailed charts by zip code and price range, please reach out to me.  Do not save charts or share with others as these are subject to copyright infringement and provided by the Cromford Report.

If you are interested in selling your home, no matter where it is, please reach out to me.  I know all the best agents across the country!

Hi Jan,
What a great post on putting the current Phoenix area market situation in perspective. It's still all about supply and demand.

Have a great holiday weekend.

Thank you Carol Williams !  Definitely need to be aware of what's going on in today's market if you're buying or selling!  Have a great 4th!

Thank you Myrl Jeffcoat !  Likewise, I hope you had a great weekend.  Here's to a smooth week!

Families on the move will love your excellent local real estate reports.

Have a very productive summer.

Thank you Roy Kelley !  Have a great day!

Hello Jan Green and thank you for sharing this report with us here in the rain.  How much longer can we vote for you!