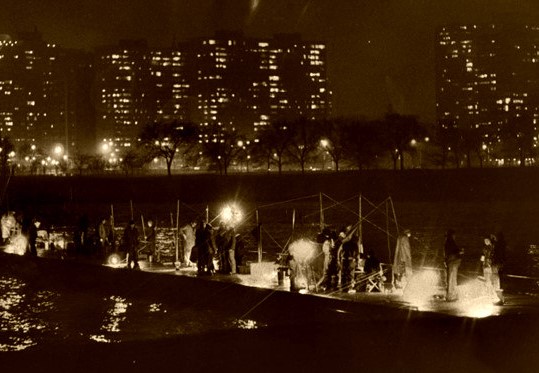 Thanks, Ray Henson and Margaret Rome for the August Challenge. Ray, I enjoyed reading about you and your dad's fishing stories. The older I get, I dare to say, the more I appreciate the good old days with family and their traditions. Gosh, I miss my dad and his brothers...

Here is the greatest fish story of the Great Lakes that I know that was passed on to me. Long before I was born, men had flocked to the shores of Lake Michigan to participate in a Chicago tradition called smelt fishing. My father and his brothers were no exception. Apparently, after the war, my father and his brothers planned their night trips during the cold and rainy month of April to fish on the piers between the hours of 7 p.m. and 1 a.m. The stories he told were the same.

They say, early April was the best time to fish because fish began to head to shore to spawn. As a child, I never saw a smelt fish in my life, but my father and uncles swore there were smelt fish in Lake Michigan and the smelt fish practically jumped into the nets by the thousands without effort, worms, or lures!

As a little girl, it sounded like magic! I would watch my mother pack my father's lunch box as she prepared sandwiches and snacks. I recall him leave the house with glee as he waved goodbye with a big smile on his face. My father got home before I woke up the next mornings. We enjoyed gathering around the kitchen table as he drank his hot tea and told us his whopping fish tales!  He swore the fish were jumping out to greet him! They tasted delicious. And of course, he was so hungry there were never any leftovers. His ice chest was always empty.

After I got married, my husband pulled all-nighters with friends of his as they gathered on the shores of the Great Lake Michigan at Montrose Beach. At least, that is what I was told, and once again, I never saw a single smelt fish in the ice chest. And his stories were similar to my dad’s stories. Because I was skeptical, I insisted on going smelt fishing with them to see with my own two eyes if this was just a fishy story, or was it real?

One day, I joined them, my father, spouse, brother-in-laws, and friends of theirs. I was told to dress warm because the nights got cold and to drink as little as possible because once I left the pier, my spot would be taken. It was a great sight to see Kerosene lanterns lit up on the shore and piers and campfires on shore burning too! The stars in the sky were brilliant, like diamonds reflecting on the waves of Lake Michigan. Skyscrapers lit up the backdrop and all around me it was dark with lights that seemed to twinkle. Those who smoked cigarettes were interesting to watch too because I could see the tip of their cigarettes and puffs of smoke come out their nose or mouth on the cold, cold night.

I learned, smelt fishing is as unpredictable as the weather in the Windy City. Dressing in layers to keep warm was taken very seriously. Whether or not you catch smelt depends a lot on the winter weather and your own patience. Seeing is believing! The first time I saw those silvery little fish being pulled up on nets I was mesmerized! The challenge depends a lot on the type of net and whether the fish can jump out before they came to shore. The burning lanterns cast a glow of silver fish squirming to be set free. Not everyone is lucky enough to catch smelt but when the smelt fish are brought up by the nets, everyone seems to rush by to hover over each other’s shoulder to see how many were caught and how many were shared and eaten. It really was a fish festival on the darkest and most glorious nights in April. If people still go smelt fishing in Chicago, is something I do not know. But the stories I heard were real. I really do miss all the men in my family who shared their greatest fish stories ever told---Patricia Feager

Endre Barath, Jr. - I loved what you shared too! It's so funny, because my grandfather on my mother's side often escaped from home and my grandmother was furious! It was a funny sight because she was so tiny and my grandfather so tall! Yours must have been exceptionally interesting, being an Artist and all! Was he a blood relative of your mother who also shared artistic talent that was superb? Oh, yes! I continue to hunger for family traditions and storytelling that were so sacred in those times way before Internet and Cell Phone. Word of mouth, was best!!!

Nina Hollander, Broker - oh, thank you! I was hoping my post wouldn't be cast aside as being ridiculous. Homespun tales from long ago make lovely memories and stories only family members who experienced it could appreciate but now I see, my writing a fish story that seemed rather fishy inspired you too!

Wayne Martin - it is wonderful to hear from you and learned you knew all about the art of smelt fishing and what a hit or miss it was but always fun! I was hoping you had a smelt fishing tale to tell too! Let's keep those fishy tales alive and well... humorous and memorable. Thanks, Wayne!

Kat Palmiotti - you would have loved it! Smelt fishing is something many men and kids I grew up with were familiar with. I am so glad I had that experience and got to see it. Feel it. Learn from the experience. And most of all enjoy the companionship with the members of my family that really came up with whoppers of fish tales that were hard to believe; yet so entertaining to hear all about it!

Ray Henson - I am happy to hear you enjoyed my story that sounded so fishy but was real! I was appreciative that I could reel in that fond memory of old family faces and their funny antics, especially the looks on my mother, aunts, and grandmother's faces after we heard their fish tales. Thank you for putting this challenge together. My own memories lifted my spirits to great heights!

Brian England - When you have a group of avid smelt fishermen, many who never caught any smelt fish in their nets, it was easier to understand that if one net came in, all would gather to gaze and cheer; then share in the celebration of success with each other and total strangers. Those cold nights makes a man mighty hungry and sitting by the fire cooking smelt kept them warm too.

Dorie Dillard Austin TX - I loved your comment! Seeing is believing! I don't know if I could have shared this story if I did not experience it myself. I am so glad you enjoyed it! Thank you!

Thank you very much, Patricia, for sharing this story.

Keep cool and have an outstanding week.

Thank you Roy. I hope your day goes great too!

Always love the way you tell a story. I can just imagine a nice pan with oil, butter and garlic over a stove warmed and hot to drop those smelt fish into, how tasty that would be.

Nick Vandekar, 610-203-4543 - I love how you whipped up a recipe as tasty as any Chef could describe from the top of their head! Thanks for the compliment. I like your stories too.

Hello Patricia, wonder why they never had any till you when with them, interesting.  You are a lucky charm all the time for people.

Will Hamm when one smelt fish team struck silver, they all hovered and watched in awe. That is probably what happened. I got to enjoy the experience a few times with my husband and that's when the smelt were spawning and got caught in the nets. A lot has to do with timing and the winter weather during that season. A lucky charm? I don't think so.

Ed Silva - my curiosity was satisfied! Good memories are always welcomed and a bright light to remember and reflect upon when time permits. Until the AR Challenge, I didn't give it much thought but know now, because all of the men related to me by blood or as in-laws are gone now. Retelling this story about smelt fishing in Lake Michigan ignited my passions and compassions both for wanting to be involved in the family male camaraderie and compassion for my mom and grandmother who griped and moaned about their fishy stories.

Patricia glad the stories were true.  I have never caught smelts, but I do love eating them.

George Souto - Can't wait to read what you end up writing! Your family is so interesting.

Patricia, You have a way of telling a story that pulls all of us in suspense until your final sentence. This is a great fishy tale...and it's true!

What an outstanding entry! Only you, Pat, could share a fish story within a fish story, and I would like to think it is the real deal. Thanks for sharing.

Margaret Rome Baltimore 410-530-2400 - it warms my heart to believe you really did appreciate my entry. Yes, back then smelt fishing was true and the real deal was having the privilege of sitting on those piers at night surrounded by the love of my male family members and counting the stars in the sky. Seeing how happy they were and how different men act together was one of the greatest and most cherished memories I have of each and everyone.

A true fish story!  Sounds like this was a great experience for you and has many found memories.  Thank you for sharing your story.

Hi Lynnea Miller - How wonderful it is to hear from you and happy to read your comments. Thank you, so much!

Hello Patricia Feager, MBA, CRS, GRI,MRP I did not think I would participate in the second part of the challenge - telling a fish story - but after reading yours I am inspired. I come from a fishing family and truly do have a lot of stories to tell.  Thank you, my friend.

As for your story, seeing is believing! A good experience for you and a wonderful memory captured with your family.

Patricia Feager with DFW FINE PROPERTIES has sold residential real estate in Dallas-Fort Worth for more than twenty years. She understands making choices needs informed decision making. She takes her career seriously and enjoys helping her clients transition to a new location, whether it is local or from out of town. Keeping clients informed throughout the process with effective communication and understanding their needs is important. Her assessments begin with taking into consideration the current market conditions and providing truthful information to her clients. Knowing what their highest to lowest priorities are and facts about what their specific needs and the current market conditions helps everyone to understand expectations. Clarity, facts, valuable feedback, observations are part of the journey when moving.