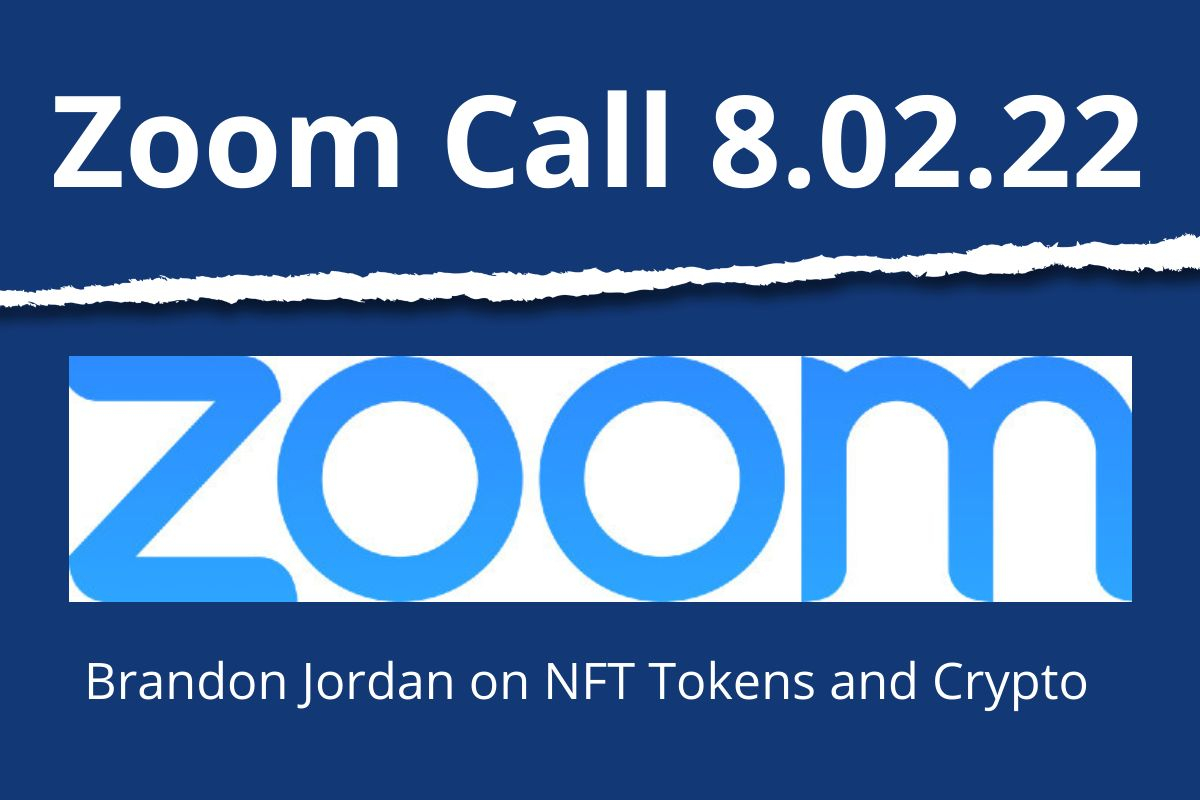 I must first apologize as the zoom call this week was a topic to which I have no familiarity and even my notes where hard for me to appreciate and understand after the call.

From the Internet, I got this definition of NFT:

An NFT is a cryptographic token, but unlike cryptocurrencies such as bitcoin and many network or utility tokens. NFTs are not mutually interchangeable, i.e. not fungible. From the call I was able to glean that NFT's are a manner of investing similar to the way one might buy stock or commodities, except it is all done online, and it is truly a matter of buyer beware.

Brandon offered that like the internet in its infancy, there are people trying to regulate NFTs which may be too early. When the Internet was new, the same attempts were made, and if they had succeeded, the World Wide Web may not have evolved into the force it has in our day-to-day activities across the world.

Brandon discussed several sites that track the available NFT's and also that can verify authenticity.

For example, if an NBA player were to get involved in a project or a celebrity, it could be tracked through an app titled Blockchain Wallet Tracker. With the exposure that it would get many different people will pick up on it.

He discussed a commodity site called board breakfast club and when you purchase the NFT you put in your shipping address, you will get shipments of different coffees just from the ownership of the NFT.

He also discussed an NFT called coin games, which is a company that is making a video game and if one owns the NFT, one will have a portion of ownership in the game and then would have shared revenue of that platform. He discussed Blockchain Real Estate which is part of a NAR group that through a venture group that is a license that will connect through securities tied through virtual land or securities.

This has connections through some of the banks that have placed assets and ledgers so that they can be traced through a title company and has all people that are connected through the chain have the ability to speed up a real estate transaction.

A question was raised relative to the coin game NFT regarding dilution of the product if additional people buy into the resource is the return reduced. He assured that it was not the case as it would be a max limited quantity and that that particular asset was such that the money deposited would allow them to build out the video game and expose it to the Metaverse and game and take care of marketing, etc. and get feedback from the community. By using some of the available analytics it strengthens the value of the NFT.

These NFTs can be similarly described as being diversified.

He suggested based on his experiences that it should be analyzed and offered that a potential investment could be put aside towards retirement much like stocks.

The question was asked: How do I start if I know nothing?

For someone that knows very little, start at coinmarketcap.com where there are tutorials on starting a wallet and starting to purchase coins. There one can go with the metamax wallet for interacting with NFTs.

He felt that is one were going with coins, then start with coin base which is easy. They would get your banking info and you would approve a dollar value going into a wallet with Coinbase as it is centralized and secured and locked.

Brandon is very knowledgeable in the process and the financials, and it was demonstrated with the ease with which he presented his information.

Hello Ed, It was a interesting calls and not sure if it is for me but you never know.  Make it a great day!

Sorry to have missed the presentation.  I understand twitter began with a nft token as well

Thanks Ed. I missed the call.  I have been following 'Making Money" with Charles Payne for many years on Fox Business.  He has many 'experts' on quite frequently regarding crypto and NFT's. Interesting to say the least.

Ed I understood NFT's better than before the ZOOM Meeting, BUT I would say you came away with a better understanding of NFT's than I did.

I am sure those who were able to attend Tuesday's Zoom meeting, benefitted from doing so, Ed.

This is a great overview of the meeting that helps even more with my understanding of it!

I feel like I am missing the boat with this stuff since I don't understand it either and it seems like a highly risky investment, haha.

Hello Ed - confusion continues to reign when the subject of NFTs is discussed.  Or is it rains?  Perhaps just word choice.  Or perhaps something else.  Regardless of when (and where or how often) it seems to pour. I digress. . .

Hi Ed,
Thanks for the recap. I was sorry to miss this presentation because it's all very foreign to me. I will go check out the coinmarketcap.com website.

Thanks, Ed, for telling us about this Zoom session.

Ed, this stuff is above me, and sounds risky.   At this stage of life, keeping my retirement money safe is very important.

What a great job on a subject you don't know well.  We all need to stay informed and learn more on the subject.

Ed - you are such a pro at recapping zoom meetings.  But this time you really nailed it and this topic isn't as familiar, as you point out.  You sound like you've been investing already and earning $$!

Great recap and thanks for attending the zoom call.  The buyer beware term in the web3 seems to be DYOR (do your own research thank you for mentioning that)

Most agents I think are familiar with RSS so used that for basic overview but many have started the switch to apis for our mls data feeds anyone handling the feeds themselves are likely familiar but I feel thats a small crowd and most have web hosting teams such as godaddy handling along with 3rd party website design.

The coins I personally have purchased are file coin $fil as mention runs the ipfs network which I feel most companies will have their data in the next 10 years onboarded to blockchain as mention above. I also like $eth which is the major player for smart contracts which are what nfts are built with smart contracts which are a new form of web apps as they expand with further use. Bitcoin I like as the rarity and use of their payment network through 2nd chain layers.

Thank you again for the recap they are always a great part of the zoom calls.

Thanks for the recap. I know nothing about this topic and this was a big help with a bit of education. Sounds like Brandon really knows his stuff and would be a good resource for answers to questions.