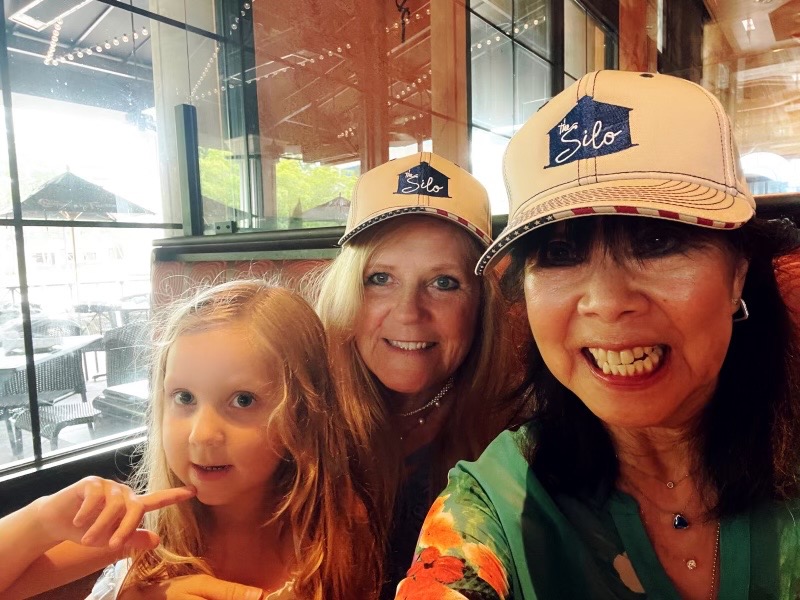 Traveling to Houston became necessary due to an unfortunate event. Our son Sebastian, broke his neck, fractured his temporal lobe, several vertebrae in his lower back. He had emergency surgery to fuse his C-6 to his C-7 vertebrae, put a plate and screws to stabilize and work to stop a brain bleed. Daughter-in-law, Devyn, the grands, Kenslee and Kodah greeted me at airport and my spirits were instantly lifted. Knowing that the trip would be near Kathy Streib, I called prior to leaving the St. George area and asked if she'd be available for lunch. We finally agreed to meet at The Cheesecake Factory.

Hugs were exchanged as soon as we saw each before sitting down. During our time together, it seemed as if we were old friends, enjoying the (sometimes) lively conversation while sharing information! We agreed to do this again in the future and hope Michael and Larry will make it next time. Kathy brought some freshly baked yogurt bread that Larry baked, as a gift, (we sliced it and had French toast this morning). I gave her a Silo hat and she is now an honorary member! Kenslee wrote Kathy a very special letter which she now has displayed on the refrigerator at home. A few quotes come to mind as I think about ActiveRain member interactions and how some people naturally transform from a professional stance to a more personal relationship status. This is definitely one of those occasions!

The greatest gift of life is friendship,

and I have received it. Hubert H. Humphrey

A friend is a gift you give yourself.

When meeting Kathy Streib in person, her sincerity, intelligence and wit are inherently part of her nature. Am truly blessed to know her!

What a bitter-sweet meet-up, I was sad as I read what happened to  your son Sebastian, you would not know it in that picture..... at the same time I was smiling that you got to meet Kathy Streib  over the 10+ years I have been on this platform every time we met someone from the platform it was like meeting old friends.... something  Next Door, Face Book does not provide a common bond, Endre

Good morning, Wanda... as Endre Barath, Jr. said, a bittersweet reason for your trip to Houston area which resulted in a sweet meet-up with Kathy Streib. Hopefully, Sebastian's healing process will proceed smoothly. Having had any number of meet-ups with friends in the Rain over the years, I've experienced that feeling as well... that I'm meeting an old friend.

I am so sorry to hear about what your son is having to go through and I hope that he will be ok.  One of my younger brothers was in a bad car accident and had to wear a halo for a few months, he is alive and well though.

I am sorry to hear about Sebastian's injuries but happy to hear you and Kathy were able to meet. As my parents use to say "Every cloud has a silver lining" - I don't know if that's actually true but in this case it was!

Hope Sebastian is on fast track recovery.  Glad you all connected over dessert😎

Good morning Wanda,
It's good to see Sebastian smiling in the photo. I'm sure having his Mama in town helped a lot. I will pray for complete healing for Sebastian!

As for the meet-up with Kathy, that had to be amazing. You and Kathy are both "real," and it was such a pleasure meeting you both.

Lunch with Kathy was a nice break and allowed all us to meet and indulge in some decadent cheesecakes, Endre Barath, Jr.. Our son's recovery will be extensive, he is strong, thankfully and has a strong support system in all of us!

Every ActiveRainer that I have met in person has resulted in furthering the friendships that started here, Nina Hollander, Broker. Our visit with Kathy was just like seeing a family member for the first time. If ever in North Carolina, would enjoy meeting you as well!

Thank you so much, Brian England. Am praying for a full recovery, he has been the sole financial support for his little family and God will provide, I just know he will! See you and BB in October!

To anyone passing by, it was like a family lunch with people catching up that truly enjoyed each other's company, Kat Palmiotti. It was THAT GOOD!

Wanda Kubat-Nerdin - Wanda Can! right back at you, my friend... be that meet-up in St George or in Charlotte!

Thank you so much Eileen Burns for the well wishes, will tell Sebastian. Dessert was a-m-a-z-i-n-g and a sweet way to end our visit with Kathy!

Thank you for the prayers, Carol Williams, he needs many of them to get back his health and on to greater plans for himself and his little family. They are all counting on that!

You are definitely a friend and our visit solidified that as well!

Looking at his photo he will recover and be stronger than ever have no fear Mom, Endre

it seems that Sebastian is lucky to be in one piece...best wishes to him for a speedy and full recovery!!!

Thank you so much Paddy Deighan MBA JD PhD, for the wishes. He has a journey ahead to get back to better health.

Unfortunate accidents happen and they are a strong family that are dedicated to each other, Patricia Feager, MBA, CRS, GRI,MRP. I found Houston to be quite easily to navigate compare to Seattle! Thank you for the kind words and am confident he will thrive again after complete healing and re-hab. My family is first for me!

Glad you could fit in a meetup. Hope your son is feeling better & on the mend as they say.

Thanks, Lyn Sims, it was a fun one and allowed us a nice break and also to see a little of the Houston area. He is improving daily and thank you for the positive thoughts!