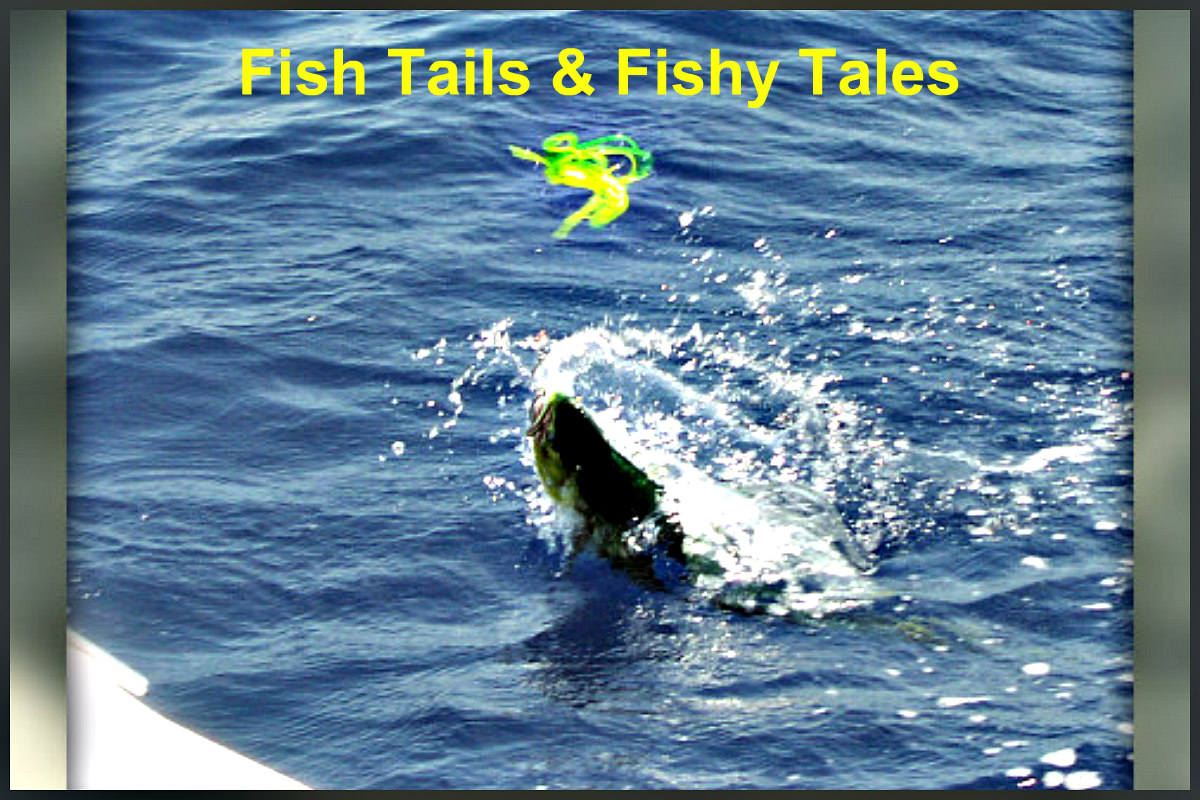 My Fish Tales…Fishy and True

We got our first bass boat in Houston and fished every weekend…weather permitting. When we moved to Delray Beach, we brought the bass boat with us and bought a 30 ft fishing boat for the Atlantic. We fished or dived every weekend for over 27 years.

We went out one afternoon to watch them sink a barge that would become part of the reef.

By the time we were heading in, the waves had picked up. It was the first time Larry said "Grab the life jackets." The Boca Inlet was where we ran into trouble…big waves poured into the inlet at the same time the tide was rushing out of the inlet No way to control a boat. A fisherman on the jetty dropped his gear thinking “I’m going to have to save these fools.”

Captain Larry got us through this and we gained a healthy respect for tides and waves. If you’ve fished at all, you know that there’s nothing more exciting than seeing a bent rod tip…even if it’s not your own.  Fish on...set the hook...reel it in!  Easy, right…except when you’re trying to reel in a fish with a large treble hook in your calf!

While everyone else was reeling in their lines ( so they wouldn’t get tangled up in my line or the motors )Larry caught my leg with a big treble hook. Did I give up the fish? NO WAY! I would rather have suffered with a hook in my leg than lose that fish!!! I drove the boat while the divers were down. I followed their dive flag and was there when they came up. I also made sure other boats stayed away from the divers.

One day while the divers were down, I looked offshore to see a large boat heading towards shore. It was going really fast and had a huge plume of water behind it. As the boat veered parallel to the shore I saw what it was trying to outrun...a large water spout. I realized it was heading towards me. Using the GPS I hit the Man Overboard button so whatever happened I could find where I’d been.

I backed away from their dive flag and watched from a safe distance as the water spout headed directly over their flag and where I’d just been.  The water spout fell apart as it reached the shore.  All was good!

When Larry and the divers came up they had no clue what had gone on! This is an entry in Truth or Dare, Fish Stories and Our August Challenge! There’s still time to get your entry in!!!!

Ray Henson and Margaret Rome Baltimore 410-530-2400 sorry that this was so long but you know how fish tales are!!!

If you spend enough time on the water theses stores just happen. Landing a fish while caught yourself was quite the feat

Wow, Kathy. I knew you liked to fish and boat but had no idea you and Larry were such avid fisher and boat people. Whether the hook in the calf story is true or not, my calf was hurting just reading about it!  Great entry!!!

Thank you very much, Kathy, for sharing your fish story.

Our exciting boating incidents do not match yours.

LOL Nina Hollander, Broker you should have seen me putting a worm on the hook with plastic gloves!!!!

Kat Palmiotti I really did!!!  There was no way I was going to lose that fish!

Brian England you should write about it...it's a great fish story.

Wayne Martin Larry was good about turning around if someone started to get seasick. I did that once fishing for bait close in and we weren't even out to sea yet.

Paul Guenther hello and ALL of the tales are true!!!  I hope you'll enter.

Dorie Dillard Austin TX LOL they're all true!!!!   The scariest one was trying to get through the Boca Inlet in rough water.

Ray Henson the important thing is I landed the fish!!! LOL

Grant Schneider you'll get there!  Just make sure you always have working safety equipment!!!

Eileen Burns I know!!!! Some of our boating was done prior to the good old iPhone and we were usually too busy and wet to try to use a real camera! Can you imagine all of the pics we could have had!!!

Ed Silva I agree, if you 're out enough you're bound to have a lot of stories.

Carol Williams Thank you!!!  I loved it and wouldn't trade those memories at all but wouldn't want to be doing that now. And yes, that hook hurt but didn't realize it until after I caught the fish.

Roy Kelley thank you. And, these are just part of them.

Kathy those were hairy moments, and I am with you, no hook in my leg would keep me from reeling in the fish.

Exactly George Souto I figured I could put a bandaid (or more) on it later!

Thank you for sharing, not just one fish story, but three adventures Kathy 🙂

Good grief - hook at you're not letting that even with a hook in your leg. Girlfriend you are one tough cookie!  I had no idea you and Larry were such avid fishers.  And yikes....the man over board story could have turned out bad.  You acted quickly and saved the day.  How long did it take for you to get back out where the guys were?

You kept me engaged with all your fish stories.  We owned a lot of different watercraft over the first 30 years of our marriage.  The one time we got scared was leaving the jetty in Mission Bay Harbor.  The swells were so large that the boat and everything disappeared.  All we could see was water.  My husband did a 180º turn and headed back to the protection of the break!  It is important to know your limits!

Hi  Paul S. Henderson, REALTOR®, CRS Larry and I have had so many fishing and boating adventures. I even treasure the rough ones!!

Anna Banana Kruchten CRS, Phoenix Broker  we did it straight for so many years and did love it.  I didn't have to go too far when the water spout came our way, thank goodness.   When I had divers down,  you have to keep your eye on their dive flag to know where they are. Often a boat would be heading our way and I'd put the boat between the divers and the oncoming boat in case they couldn't see the dive flag that we flew on the boat.

Sheri Sperry - MCNE® no kidding.  We kept a flats boat when we commuted between Orlando and Delray and anchored in the Intracoastal once to watch the air show from Patrick AFB. So much fun!!!!

Hi, Kathy. What happened to the "large waterspout?" How long did it last?

That was a pretty exciting picture of the rare waterspout!

These stories are best told over a campfire with s'mores after a full day of fishing, Kathy! Enjoyed reading about yours and Larry's adventures!

Hello Kathy Streib
Story #1: I was in a similar situation on a lake. I never knew lakes created waves like we encountered. That was scary indeed.

Story #3:  You sure have some tales to tell. As many years as you spent on the water, I think you could fill a book with your experiences.

Having grown up fishing in Wyoming and Kansas, I can tell a true story when I read one.  That's quite a story - getting a hook in your leg must have been super painful - but the fish was worth the struggle.  That's one to remember!