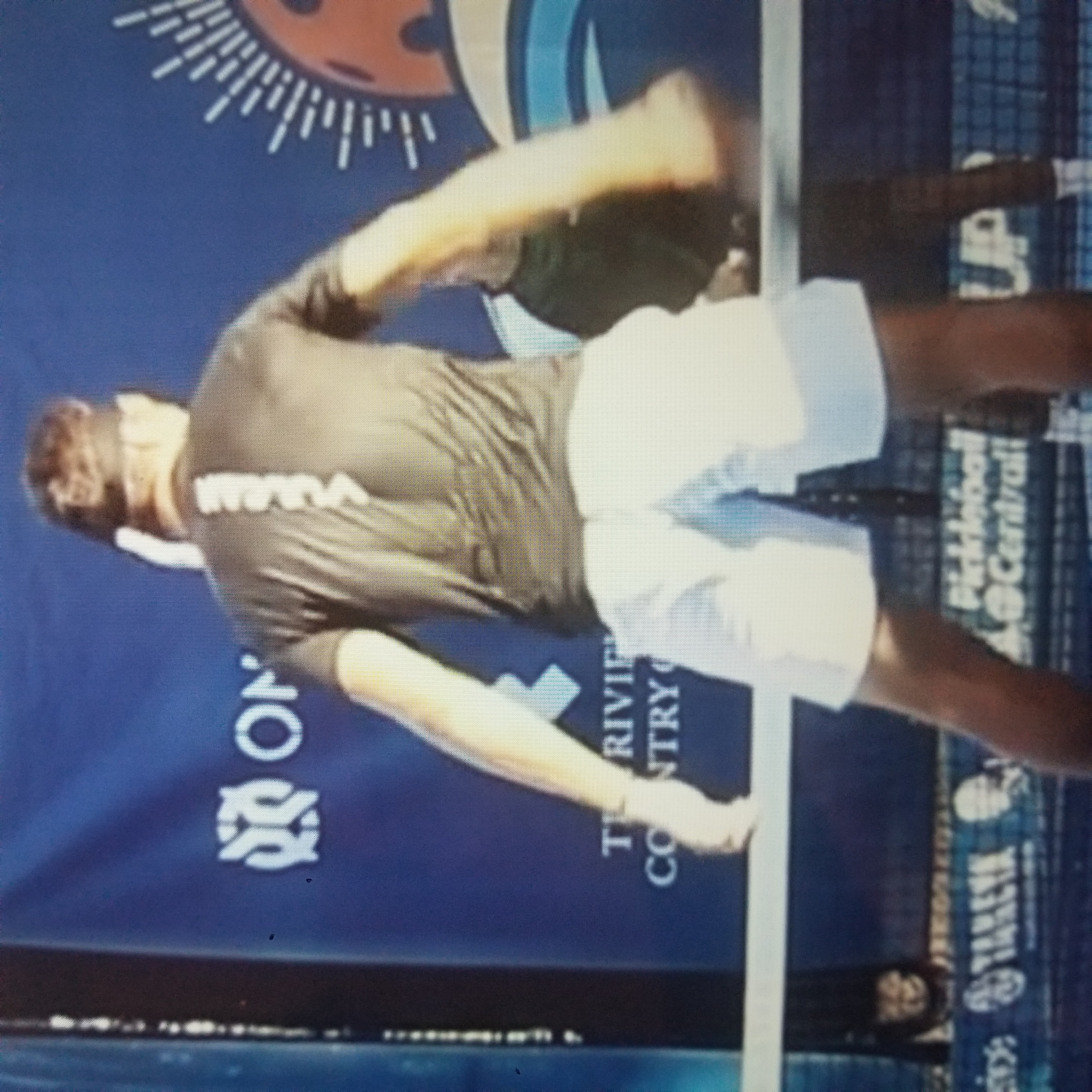 Did you know that the first Nationally Televised Pickleball Championship was Hosted in Pacific Palisades?

Now let’s be clear most of you like me would say well what is Pickleball? In all fairness thanks to our friend Ray Henson      I learned about Pickleball. Initially I thought it was a joke, that when you are “pickled” and play a sport. Well not really look at the small history of Pickleball below. Pickleball was invented in 1965 on Bainbridge Island, a short ferry ride from Seattle, Washington. Three dads – Joel Pritchard, Bill Bell, and Barney McCallum — whose kids were bored with their usual summertime activities — are credited for creating game. WHO KNEW?  Pickleball has evolved from original handmade equipment and simple rules into a popular sport throughout the US and Canada. The game has growing internationally as well, with many European and Asian countries adding courts.

A Pickleball court is the same size as a badminton court and measures 20×44 feet. In Pickleball, the same court is used for both singles and doubles play. The net height is 36 inches at the sidelines and 34 inches in the middle. The court is striped like a tennis court with right and left service courts and a 7-foot non-volley zone in front of the net (referred to as the “kitchen”). Courts can be constructed specifically for Pickleball, or they can be converted using existing tennis or badminton courts. According to Wikipedia :    In 2021 and 2022 the sport was named the fastest growing sport in the United States by the Sports and Fitness Industry Association, with over 4.8 million players. The spread and growth of the sport is attributed to a number of factors including a short learning curve, appeal to a wide range of ages and fitness levels and low startup costs. There are now thousands of Pickleball tournaments throughout the United States, including the US National Championships and the U.S. Open Tournament, along with two professional tours and one professional league. Pickleball is also seeing a growth outside the United States with several other national and international competitions.

My take is that the Pandemic Shutdown from 2020 has helped the popularity of this sport and catapulted it to it's current status. Now I was a bit disappointed not seeing our friend  Ray Henson  at the Championship game? Maybe he was sidetracked by being busy with Real Estate and could not make it. Or did I just miss him??

On the other hand if you are considering to sell or buy  next to this great location, that is the Riviera Country Club in the Pacific Palisades, please reach out to me directly and I will help you buy or sell. Pickle ball sounds amazing! Thanks for the education and have equally amazing fun

Do not start, Laura Cerrano.  If you do, you will loose all of your free time!

Hi Endre - I really have to see this game.  I was introduced as a choice at our Business Council day of golf in June.

Good morning Endre. Remember discussing a new development in Florida with the developer and he said some of the recreational space was for Pickleball courts. I asked what it was? He expanded the number of Pickleball courts and they were very popular in his 55+ community. Enjoy your day.

In our 55+ development, we have 23 courts and there are plans to build 16 more, Wayne Martin.  The sport is attracting lots of young people too.  The best player in women's pickleball, Anna Leigh Waters, was 14 years old when she became #1.  She plays with her mom and they are a formidable team!

I have a friend from high school who I called a year or two ago and she told me she'd been playing pickleball, and just a few days later I read something by Ray Henson about the same thing. Then I found out there's a pickleball court about 20 minutes from my house. I haven't tried it yet, but I bet I do at some point.

I think you will love the game, Kat Palmiotti.  It is fun and very social.  I really enjoy the people that play the game.  It is a part of the appeal.

Good morning, Endre... no, I did not know that... but I do now! Pickleball is becoming a big thing here in the Charlotte area.

Hmm never heard of this sport of Pickleball. Thanks for increasing my awareness.

I have made it to Center Court and, ironically enough, my friend caught me on national TV.  Here I am pictured with JW Johnson, one of the best in the game!  And yes, this is the ONLY way I make it to center court. 🤣  It was a great single's match. Interesting history on Pickle Ball Endre. We are noticing that many of our 55+ communities are using their tennis courts by changing the net size.

Hi, Endre. Aha! Glad to learn that pickleball was invented by someone living in my neighborhood, Bainbridge Island (46 mi from my town, Port Townsend).

I see people in my community playing pickleball almost daily when I drive into the gate. I first learned about pickleball from our famous pickleball player, Ray Henson.

Maybe I could host a pickleball tournament next summer in Port Townsend for AR enthusiasts?

That would be fun, Aura Alex.  You live in a beautiful area.  My dad forced me to play one day in Long Beach, Washington.  There were a lot of good players and I was hooked about 10 minutes into my first game.

Like you, I thought pickleball was a joke.  I toured a planned community in Phoenix and they had 12 pickleball courts.  That is when I realized it was real.  Our community has a tennis court and I think it would be fun to play pickleball on it.

You can fit 4 pickleball courts on one tennis court, Sheri Sperry - MCNE®, for a total of 16 players at one time.  And if you build them, they will come.  We have 6 courts at our favorite place to play.  It is common to have 24 people playing and a line of 12 to 20 more waiting to play.

Endre I had not heard of pickleball either until I read one of Ray's blogs.  Since then I have been noticing it on ESPN more and more.

Hi Endre- I first heard of Pickleball when a friend started playing several years ago!  And thanks to Ray Henson I'm learning even more about it.

Endre Barath, Jr. - Until Ray Henson started blogging about Pickleball I had no idea anything like that existed and thought it was an odd name. Now, I hear about it locally at least once or twice a month. But I did not know that the first Nationally televised Pickleball Championship was hosted in Pacific Palisades! Perhaps if  Wayne Martin puts that question in one of his Trivia's I'll remember!

Drew Brees is now a co-owner of a Pickleball Team.

Endre, while somewhat familiar with Pickle Ball, Southern California boy, I had no idea it had grown to National and professional status.  Interesting info.  thanks, m

I've never played Pickle ball and I became aware of it about a year ago when the City of Frederick installed a pickle ball court in Baker Park.

I did not know the history so, thank you for the lesson, Endre!

I recommended a concrete contractor to one of my clients a few months ago. They wanted a pickleball court poured in their backyard - and they got it! The couple are both addicted to pickleball, much like our Ray Henson!

I do not think addiction is a strong enough word, Debe Maxwell, CRS.  Tell your clients that they have company from CA on the way.   😜