Book Recommendation: Listen to Me by Tess Gerritsen

Dolores and I enjoyed reading Listen to Me (2022) by The New York Times Bestselling Author Tess Gerritsen. This is book number 13 in the Rizzoli and Isles series. Click on the links to learn more about the author and this book. 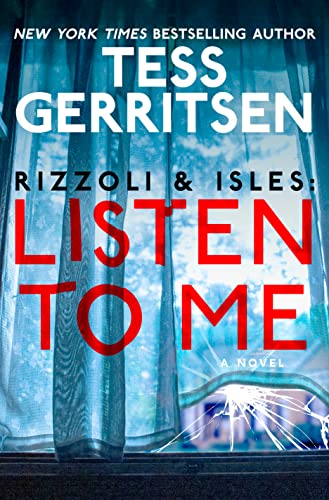 Rizzoli & Isles are back! From New York Times bestselling author Tess Gerritsen, this “shocking and fast-paced” (Karin Slaughter) thriller has Jane and Maura investigating a brutal murder with dire implications, and this time, with Jane’s intrepid mother, Angela, looking into a mystery of her own.

“Absolutely first rate—readers will be thrilled and delighted by this new Rizzoli & Isles outing!”—Shari Lapena, New York Times bestselling author of The Couple Next Door

Mothers know best . . . But who will listen?

Boston homicide detective Jane Rizzoli and medical examiner Maura Isles are plagued by what seems like a completely senseless murder. Sofia Suarez, a widow and nurse who was universally liked by all her neighbors, lies bludgeoned to death in her own home. But anything can happen behind closed doors, and Sofia seemed to have plenty of secrets in her last days, making covert phone calls to old contacts and traceless burner phones. When Jane finally makes a connection between Sofia and the victim of a hit-and-run months earlier, the case only grows more blurry. What exactly was Sofia involved in? One thing is clear: The killer will do anything it takes to keep their secret safe.

Meanwhile, Angela Rizzoli hasn’t had a decent night’s sleep in all the years since her daughter became a homicide detective. Maybe the apple didn’t fall too far from the tree. Nothing in her neighborhood gets by Angela - not the gossip about a runaway teenager down the block and definitely not the strange neighbors who have just moved in across the street. Angela’s sure there’s no such thing as coincidence in her sleepy suburb. If only Jane would listen; instead she writes off Angela’s concerns as the result of an overactive imagination. But Angela’s convinced there’s a real wolf in her vicinity, and her cries might now fall on deaf ears.

With so much happening on the Sofia case, Jane and Maura already struggle to see the forest for the trees, but will they lose sight of something sinister happening much closer to home? Goodreads

Internationally bestselling author Tess Gerritsen took an unusual route to a writing career. A graduate of Stanford University, Tess went on to medical school at the University of California, San Francisco, where she was awarded her M.D.

While on maternity leave from her work as a physician, she began to write fiction. In 1987, her first novel was published. Call After Midnight, a romantic thriller, was followed by eight more romantic suspense novels. She also wrote a screenplay, “Adrift”, which aired as a 1993 CBS Movie of the Week starring Kate Jackson.

Her books have been top-3 bestsellers in the United States and number one bestsellers abroad. She has won both the Nero Wolfe Award (for Vanish) and the Rita Award (for The Surgeon). Critics around the world have praised her novels as “Pulse-pounding fun” (Philadelphia Inquirer), “Scary and brilliant” (Toronto Globe and Mail), and “Polished, riveting prose” (Chicago Tribune). Publisher Weekly has dubbed her the “medical suspense queen”.

She is also a filmmaker.  She and her son Josh have just completed production of a feature-length documentary, “Magnificent Beast,” about the ancient origins of the pig taboo. Their previous film, “Island Zero”, is a feature-length horror movie that was released in 2018.

Now retired from medicine, she writes full time. She lives in Maine. Good morning, Roy. I was a faithful watcher of the TV show and have read some of Tess Gerritsen's books... but not this one. Will put it on my list.

Hi Roy - like Nina Hollander, Broker I loved the series on TV but have not read her books! Add another one to my growing list

Good morning Roy. I like large series fiction. So, you never know how high on the must read list this series may get. Enjoy your day.

Listen to Me, sounds like a great read for all the bookworms out there, Roy.

Your book suggestions have become an inspiration, and they may help me meet the goal of 30 books this year.  Thanks!!

Like several others, I love the TV series and have been watching some re-runs lately as I exercise. Thanks for the book recommendation.