My dad lived his life as an avid fisherman.  He worked on the railroad during the week, but come weekends, he often headed where water dwelled.

When I was a small child, we trekked to either the Sacramento or American River to harvest fresh water fish.  However, when I was about 6 or so, dad’s fishing lust turned toward deep sea pursuits.  Weekends were often spent at Princeton-by-the-Sea, which back then was found 4 miles north of Half Moon Bay, here in California. However, in today’s world Princeton-by-the Sea has been completely integrated with Half Moon Bay’s significant growth.

At dawn, Ray Gardiner’s deep sea party boats departed the pier with dad, and sometimes mom.  I always longed to go along.  However, age limit for boarding Mr. Gardiner’s boats was 12 years.  I don’t exactly know how it was finagled, but eventually, when I turned 11, Mr. Gardner relented and allowed my first fishing excursion with the crew.  I was a curious kid back then.  I learned dad always fished Starboard side of the boat.  But, I was curious about Port side.  So, after a bit, I gathered my pole and took to the other side of the vessel.  I dropped my line, with bright shiny chrome plated lure, handcrafted by my dad and I immediately hooked something that felt big on my line.  At my mere 70 pounds or so, there was no way I was going to be able to keep possession of that pole and manage reeling at the same time.

I looked to the other side of the boat.  Dad was busy reeling in a fish of his own.  I turned to my left, to a big ole guy who could have doubled as Mike Tyson.  I whimpered, “HELP!”  That sweet man was so gentle and patient. He put is pole down, came over and helped hold my pole while I reeled, until we got that ole Ling Cod onto the boat.

Here’s a picture taken that day.  The year is 1954.  I caught a gunny sack full of fish that day! Anna Banana Kruchten CRS, Phoenix Broker - I had been so accustomed to the smaller river fish I had caught previously, that when that big boy came on my line, it felt like a horror story for a moment.  But, with assistance of the guy who had been standing to my left, it felt wonderful reeling it in.

Ray Henson - I only caught that one Ling Cod that day.  But, the smaller Blue Fish, and Red Rock Cod, seemed much easier to deal with.  I didn't have to yell, "Help," to get 'em on board.

Aura Alex - Mom was always gifted at cooking fish wonderfully.  I miss those days.  You're right about the mouths of the Ling Cod.  But, a scarier looking fish to me, is the Red Rock Cod.  They look almost prehistoric. 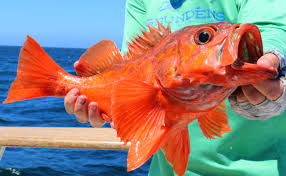 Good morning, Myrl... loved the photo of you and fish and loved your story (despite the fact that fishing is totally no my thing!).

Good morning Myrl. First question how did the others do that day? If you caught the most were you barred until you turned 12? Have to ask since avid fisherman get juelous fast! Nice photo of some of your catch. Enjoy your day.

Wow, I love that photo and the story! Your dad must have been so surprised!

Thank you very much, Myrl, for sharing your great fish story.

Myrl, great story and pic to go along with it.  What pier in the back ground?  Mark

Wow!  What a haul.  It is good that there was a camera so you could capture that moment.

Myrl the fish in your left hand must have felt like you had hooked bottom.

Nina Hollander, Broker - I should mention that the only part of fishing I enjoy is catching the fish and reeling them in.  I don't like dealing with live bait, and I've never cleaned a fish in my entire life.  I'll certainly cook them up really good, however.

Wayne Martin - What I remember about that day, was there was constant reeling going on.  Not only with myself but others.  I think it was a good fishing day for all aboard.

Kat Palmiotti - I don't really recall my dad's reaction; but Ray Gardiner the owner of the fishing boats seemed tickled by it.

Mark Don McInnes, Sandpoint-Idaho - That's the pier at Princeton-by-the-Sea (about 4 miles south of Half Moon Bay, California).  It still stands to this day.

Sheri Sperry - MCNE® - The photo was taken by Ray Gardiner, the owner of the fleet of fishing boats.  A copy of it hung on the bulletin board inside the ticket office for awhile.

George Souto - All fish I had caught up until that day were small fresh water fish, without much gusto.  When I hooked that Ling Cod as my first deep sea fish, I felt a little overwhelmed!  I caught another Ling Cod that day, but it wasn't quite as big or feisty.  And, I was able to manage the Blue Fish and Red Rock Cod, just fine!

Have a nice week.

Myrl Jeffcoat - Best fishing story I read to date! I had so much to say, I wanted to make sure I got it right and composed my comment in Word before copying and pasting:

Myrl, I loved your story about being the daughter of an avid fisherman who made a living on the railroad. Having a weekend with your dad to ‘harvest fresh water fish,’ was very different than I had with my dad who fished lakes. Princeton-by the-Sea sounds like it was a great place to live before in was completely integrated with Half Moon’s Bay.

Vicariously, I can only imagine how curious and precocious you were as a child, especially when your parents boarded party boats that had age limitations. Mr. Gardner must have been extra special and understood your thirst for the sea and deep-sea fishing. Your story was endearing!

Even though you were so young, that photograph shows your maturity and confidence. Lucky for you the man who resembled Mike Tyson was very understanding and helpful. I can only imagine being there but you experienced it all with a superb memory, being grateful. And you have a photograph of that photo taken by the owner of the fleet of fishing boats that he so proudly hung inside his ticket office for a spell. I’ll bet many eyes were popping when they passed the bulletin board!

Myrl, I felt like I was reading a story from Readers Digest! You weaved your story into my heart and gave me positive feelings today. Thank you!!!

Patricia Feager, MBA, CRS, GRI,MRP - I appreciate that you put so much time and thought into your comment.  Princeton-by-the Sea was only a sleepy little fishing community back in the 1940s and 1950s.  Half Moon Bay wasn't much larger.  However, in recent years, Half Moon Bay has ballooned in size.  I hardly recognize it from before.

I've attended a few class reunions over the years.  My classmates often remind me of how mischievous I was as a kid.  One recalled a time while we were in the 4th grade, and the teacher told me to take the gum out of my mouth that I was chewing. . .So, I stuck it on the end of my nose!

Myrl Jeffcoat - I'm looking at your Profile and tried to imagine what you'd look like if that gum stuck to your nose and became a perfect fixture to your face. I think you would have been my favorite classmate as kids in grade school and of course my favorite AR Blogger too! Growing up in a 'sleepy little fishing community' sounds wonderful! Do you remember that song "Come on Down to My Boat Baby," by Every Mother's Son? That's what I'm also thinking about - seeing you down by the dock tied up while your parents go out to sea!

Stepping back in time with you sounds so charming and quaint dotted with fishing boats. Myrl, you created such vivid imagery in my head! Thank you.

That is such a wonderful story and you caught some big fish as a young child, I can tell you had a lot of fun spending time with your parent's deep sea fishing.

Hi Myrl, I love this photo. What a great story!

Hi Myrl,
What a great fish story. Have you ever had such a successful fishing excursion since?  Your mention of your 70-pound body made me laugh because I was told I was 75 pounds when I was 12. I laugh now because I tell people that I was a skinny little thing when I was young... but I got over it!  LOL

Loved your story and the picture is awesome!  Memories are something we always have! Thank you for sharing!

Great story Myrl Jeffcoat.  Unfortunately my days of deep sea fishing ended along time ago.  I can't go out there without getting sick.

I love that whole area.  My wife and I will probably be making a trip over there this week just to get a break from the heat for a while.