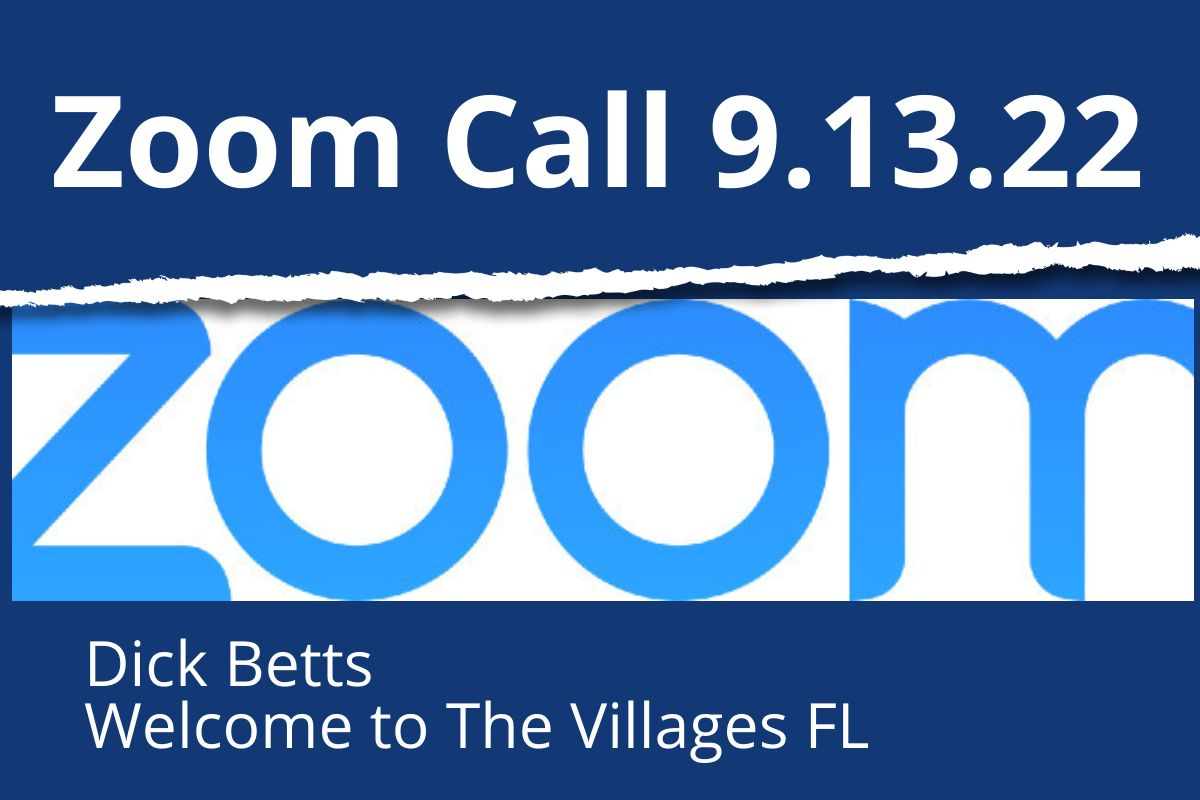 Thee Zoom call this week was a masterful presentation on a very unique adult village in Central Florida. The Villages is a planned community catering to adults seeking a comfortable Florida lifestyle without the fast-paced disturbances of the tourist areas. An 11-year resident of The Villages, Dick Betts, enjoys the area and serving the numerous people that make their way to the are seeking the social interaction of similar aged adults in an environment catering exclusively to an almost non-working population.

The exclusivity of age is strictly no one under the age of 19, or school aged children, people can live within the area. This affords lower taxes and no school buses. The Villages is centrally located within an hour's drive of Orlando, and Tampa and slightly longer to the East coast towns of north central Florida.

Its location is such that the heavy storms that hit Florida seldom reach their area and the resulting damage is minimal at best.

The Villages started out as a small mobile home park in the 1970's and called Orange Blossom Gardens. It was minimally successful until the original owner brought his son into the business in the early 80's and it blossomed.

In the early 1990's, the son changed the name to The Villages thus establishing the area as a Community Development District, which is legally identified as a special purpose local government, which allows for bond sales to develop infrastructure. These bonds also allow for the development of town squares which are conveniently located throughout The Villages. The Villages has become one of the fastest growing communities in the country with a 10-year growth of almost 40% and growing.  Each development is started by acquiring large tracts of land and first developing the infrastructure with roads golf courses and common areas, and then the developers start the home sales. New sales are exclusively done by the developers, but almost all resales are done by local real estate agents.

The current population of the Villages is almost 140,000 people. The area has become so exclusive that they are a self-contained MLS with no national affiliation. The first town square developed in the Villages is called Spanish Springs. It offers a center area where there is always music daily from 5 to 9, along with adult beverage Shoppe's.  There are 4 such venues within the Villages.  There are also restaurants to create that downtown atmosphere. Dick offered a side story of the social interaction within the squares all color associated.  It involved blue shirts with upturned collars and gold shoes. I won't offer the entire story as some things just require attendance at the Zoom calls. The primary mode of transportation within the Villages is a golf cart style vehicle, Some residents get very creative and elaborate with them as noted from the photos. There are over 60,000 such carts and they enjoy special tunnels and paths to allow for movement across the area.

There is over 20 miles of area as these carts have reasonable distance and can be used for almost all daily needs. For real estate, there is still the original Orange Blossom trailer area where one can buy a single mobile home for $150,000 and they are slowly being torn down and the lot is then built upon with a more permanent structure. Within the community there are all manner of activities with common swimming pools, pool, billiards cards and of course golf.

The Villages have the greatest number of golf courses in the world.

With the CDC fees, golf is included within the community. What would be considered an HOA fee would be a $190 per month and the annua CDC fee averages $300.

I have heard about The Villages from several of our clients who either have a second home there, or are moving away from there. Seems like an enormous community!

Ed, thank you for the summary. It was an informative and entertaining presentation. I enjoyed it very much.

Hello Ed and Dick pointed out lots of great information for the Villages.  I have friends that live there and I have a cousin that goes down every February from Pennsylvania

Hi Ed... I've had a number of clients in Charlotte whose homes I sold who moved to The Villages. They seem to like living there.

Hi Ed,
That was a fun call. The Villages sounds like a place I would enjoy living. And, BTW, I have no gold shoes. 😂

Hello Ed - ActiveRain has introduced me to a number of communities in addition to the way the real estate business is practiced across our country.  Although the history shared is new-to-me, I am also familiar with The Villages.

Ed great recap of the ZOOM Meeting.   By the end of the meeting Dick had me convinced to schedule time to check out the Villages in FL, and when I do, I will make sure I leave my blue shirts and my wife's gold shoes at home.  😜

George Souto How come so many of you that were on the call are picking blue and gold as the topic of discussion?  I should have brought up the upside down pineapple!

Great overview! I've heard of the Villages, have a friend that lives there, and have read many of Dick's Village-related blogs and I still learned a lot from the Zoom presentation. I'm glad I made that one!

Dick Betts gave a very informative and fun preso!  And of course you recapped it perfectly and only left one or two things out - right Carol Williams !! Blue and Gold.....what was that all about? 🤣

Come to think of it those were my siblings school colors too Dick Betts !!!🤣

Great job as usual Ed! It was interesting to learn about such a unique community

Hi Ed- I thoroughly enjoyed Dick Betts presentation!!! He knows the Villages. As I told him, if I didn't have family here, I'd consider looking at The Villages.

I’m not really familiar with the area, but you’re welcome to s if I’m ever in town I suppose.

Thanks for the Zoom session summary, Ed.  I'm sure those who were able to attend, benefitted.

Hi Ed - of course, being a sometimes Floridian I enjoyed Dick's presentation.  The one thing I was doing while listening what Googling golf carts for sale.  I have room for one in my garage along with my car.

I have heard a lot of good things about that community so it would have been nice to learn more about it from Dick Betts, I was bummed that I could not attend.  Thank you for summarizing the call for us though!

The son sounds like he was a smart cookie to get the bond sales started that got the whole thing rolling. I have not heard of the Villages, but sounds like a place many people would like.

Great recap on an interesting and informative presentation with Dick Betts. I have heard of the Villages but knew nothing about it. Sounds like quite a growing community with lots to offer.

An excellent presentation by Dick and a wonderful recap!