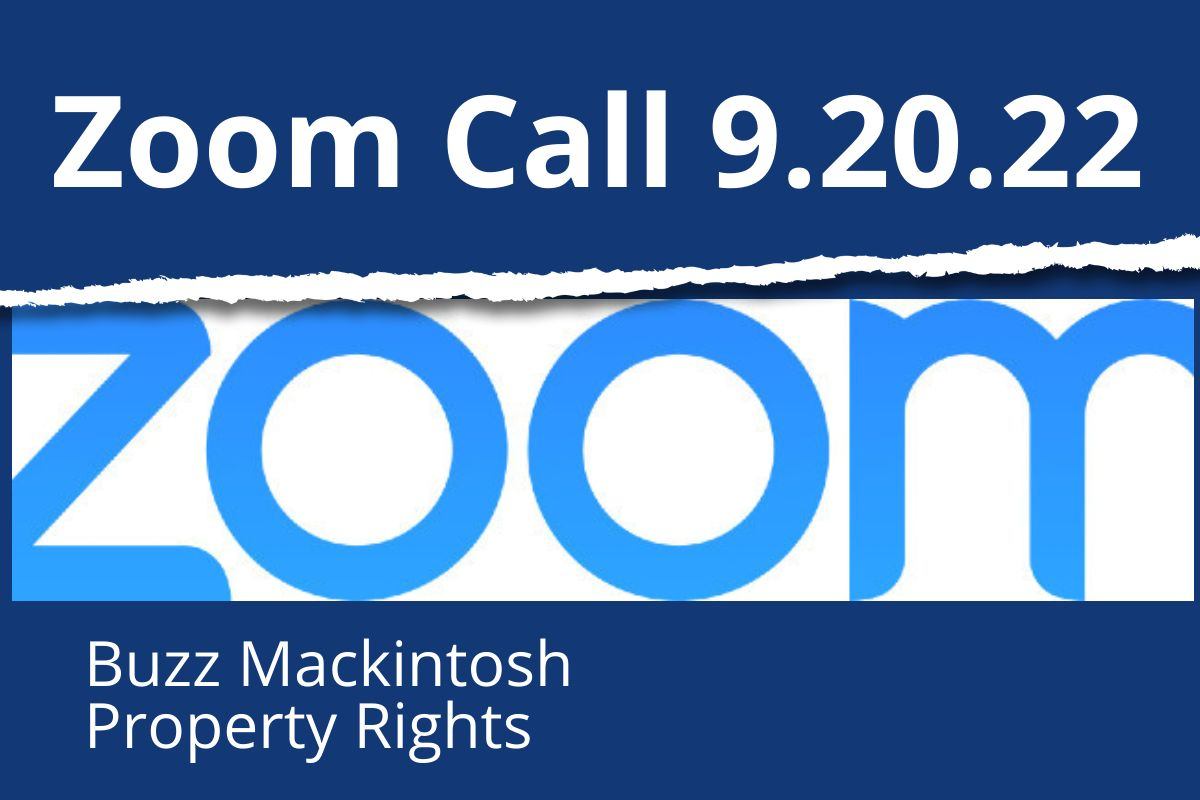 The Zoom call this week was presented by Buzz Mackintosh, and he spoke on protecting your property rights. In most urban areas, property rights are pretty well established, and could be more difficult to encroach or change. Regretfully, the examples that Buzz offered were those encountered by his family or people that he knew in the area of Maryland he and his family call home.  He was able to get a satisfactory resolution to the issues, but it was his attentiveness and perseverance that saved him and his friends.

What are the rights of a property owner?
When you own real property, you have certain rights that go along with that ownership, including: Right to possession; Right to control; Right to use and quiet enjoyment; Right to allow others a right to use (licenses and leases) Right to privacy and to exclude others; Right to disposition or to transfer the property to someone else by selling, gifting or inheritance; Right to use property as collateral through a mortgage

It would seem to be fairly basic, yet it does not take much to have rights removed or compromise.

Example he offered: He owns large acreage in his area of Frederick MD and has granted easement to the local power company to run their transmission towers and lines through his property. The power company submitted a plan that would have enlarged an area of his property to accommodate a larger substation. This would allow for transmission of power from West Virginia but only to travel further up to the Northeast with less than 5% of the power being needed locally. They were using the easement as a means to generate more power which would have only benefited the power company. He and his neighbors were able to stop the expansion and kept their property rights intact. His second example had to deal with a Trust and property used for recreation in his area known as Sugarloaf Mountain. This area was once the personal property of a wealthy industrialist at the early part of the 20th century and has been set up per the wishes of the original owner for public. The trust expires late in 2046 and the county and state fear that when the trust expires the conservators of the trust will then start to develop the land, which would be contrary to the original owners will.

As a means to avoid this, the local legislators attempted to create an overlay on the land limiting use. This overlay would also impact much smaller landowners that happen to abut the property in question, thus stealing the property rights of the affected owners.

As a further example, Buzz noted, that if he had a large fire to his personal residence, the overlay restrictions were such that he would not be able to rebuild his house.

This is something that is being seen across the country and it is an attempt by government through the power companies to control individual energy usage. It is a program, where people can elect to get a smart thermostat, installed in their home. If they accept, they are given $100. In turn the government can control power usage at peak times by shutting off the power to those people that have the thermostats.  These programs are currently in affect in California and Colorado.

This is a federal program which is intended to keep large tracts of land open. A property owner can sell their development rights to the government at a rate of $7,500 per acre. They can no longer subdivide their land and the rights would convey should the original owner sell. It also restricts the owner in subdividing to allow his family to build adjacent to the original owner.

In some instances, local governments will try to restrict development particularly in his area along large bodies of water that will flow into the Chesapeake Bay watershed area. and offer no compensation to the owners similar to the federal plan.

He encouraged people that live in areas where large tracts of land could be affected to be attentive to any potentials of development or implementation of unjust laws.

He also mentioned that there is assistance both from the state association of realtors as well as NAR to fight issues.

Great synopsis, Ed... I was sorry to have missed this presentation... but had a last minute inspection issue pop up that needed resolution on Tuesday afternoon.

Thank you for the excellent overview. This was very interesting, and it points out that we have to pay attention to what is going on in terms of our local property rights. It seems as though as vacant land is decreasing, property right grabbing increases. My eyes are open!

That is scary stuff.  When a purchase is made, the assumption is that we have the property rights until we sell the property.

Jeff Dowler, CRS  It was enlightening as things happen around us and we are lulled into thinking all are respectful and honest.

Will Hamm   And thanks for taking the time to stop

Wanda Kubat-Nerdin - Wanda Can!   It was a good call and he is very passionate about protecting rights. We do not see a lot of that in the highly urban areas but the more rural the better informed one must be.

Patricia Feager, MBA, CRS, GRI,MRP   He has something similar in his area and his coalition consists of a lt of different home associated groups

Dorie Dillard Austin TX   By his presentation it was evident that he has been fighting the cause for a number of years and is working to get people informed across the country.

Anna Banana Kruchten CRS, Phoenix Broker   We do need to be vigilant and in particular those that live in areas with large expanses of open land.

Nina Hollander, Broker   We all need to take care of business first, but there is enough in my recap to give all an idea of some issues to be on alert to address.

Kat Palmiotti  It would seem that your area is one where an issue similar to those he discussed would present themselves.

Thank you very much, Ed, for telling us about this Zoom session.

Ed, thanks for sharing Buzz's presentation on property rights, sounds like I missed a good one, again.

Ed, Buzz's was an eye opener on how quickly government can take our property rights away from us if we are not on top of things;

Your summation of the topic is always superb and to the point.  I only wish I could attend the calls more often.  Lots of interesting subject matter, as this one was about property rights.  Thank you!

Thanks for the recap on Tuesday's Zoom Call, Ed.  I'm sure those who attended, benefitted.

I am disappointed to have missed this Zoom call.  It is fascinating that our government tries to curtail our energy use when we most need it in the hottest part of the day.  They will have to force me to put in a "smart" thermostat.

One of the main reasons that we are leaving CA and selling our rentals in CA is because our politicians have taken away too many property rights already and, without much opposition, will be taking away more soon.  I just had to help my dad evict a person from his house that was not on the lease, never paid rent and did damage to the house.  We were lucky the process "only" took about 7 months.  I may have to write a full blog on the experience.

And Roy Kelly, thanks for taking the time to stop

George Souto  People are either indifferent or fail to realize how self-serving some politicians can really be.

Sheri Sperry - MCNE®   from mu interpretation of his call, your area could be a prime location for the types of infringements he mentioned

Myrl Jeffcoat  Thanks for stopping it was a good call and an eye opener as well.

And Thank you for the recognition.

Ray Henson  How sad that it took so long to get squatters out of the house a. The Liberals in the courts refuse to recognize that one cannot live anywhere for free and take away the owners' rights to favor those that just use the system

Keep up the good work Ed!